Haiti Paid Reparations to Enslavers. So Did Washington, D.C.

In 1862, more than 900 enslavers living in the nation’s capital received money compensating them for the immediate emancipation of the more than 3,000 people they enslaved. 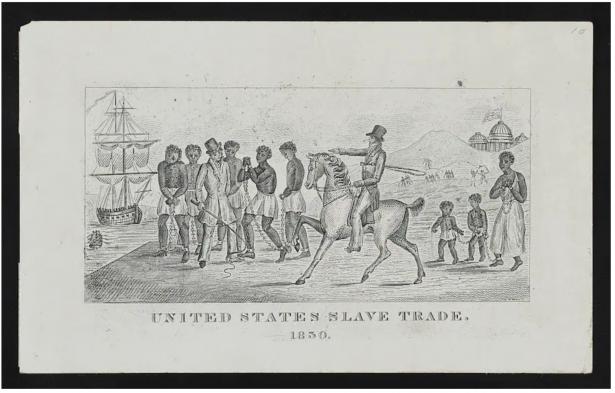 This abolitionist illustration depicts slavery in Washington, with the Capitol building in the background,cretit Library of Congress

The New York Times published an ambitious series last week about payments that Haiti, the first nation founded by formerly enslaved people, was forced to make for decades to the descendants of the people who had enslaved them.

Those who were previously unaware of “reparations” payments made to enslavers, and their far-reaching consequences for Haiti, may be surprised to learn that something like this happened in the United States, too.

In 1862, more than 900 enslavers living in the nation’s capital received money compensating them for the immediate emancipation of the more than 3,000 people they enslaved. The payments — averaging about $300 per enslaved person, equal to $8,587 in today’s money — came from the federal budget.

The enslaved people themselves, whose wages had been stolen from them for their entire lives, received nothing. There was one exception: If they agreed to leave the country for Liberia or Haiti, then they could get up to $100.

Lincoln tried to free the enslaved in D.C. years before he succeeded

It’s the only example in the United States of “compensated emancipation” — which, again, compensated the enslavers, not the enslaved — but this was a popular form of emancipation in the British and Spanish empires.

The D.C. Compensated Emancipation Act preceded President Abraham Lincoln’s Emancipation Proclamation by nine months and was the culmination of the capital city’s slow walk toward freedom — one that Lincoln himself had tried to push forward years earlier.

A little history: The capital of the young nation was moved from Philadelphia to the new District of Columbia, sandwiched between two slaveholding states, as a result of the Compromise of 1790. Geographically, it was part of the South, but since it was the seat of government, it also attracted abolitionists, who called for an end to slavery in the capital as early as the 1820s.

In 1835, White residents rioted over an alleged plan by an enslaved man and an abolitionist to incite a rebellion. And in 1848, 77 enslaved Black Washingtonians attempted to escape aboard a ship called the Pearl, the single largest nonviolent escape attempt in American history. Unfortunately, weather slowed their escape and they were recaptured.

Desperate for freedom, 77 enslaved people tried to escape aboard the Pearl. They almost made it.

Two years before the escape attempt, about a third of the District had retroceded, once again becoming part of Virginia. The city of Alexandria, which was part of the retroceded area, was a significant port in the domestic slave trade. Many of the attempted escapees aboard the Pearl were sent to Alexandria and sold south. Two years later, as part of the Compromise of 1850, the slave trade was banned in the District, though slaveholding was still permitted.

In 1849, Lincoln, a little-known congressman, proposed a compensated emancipation deal for the District, but it failed. Thirteen years later, with all the senators and representatives from Confederate states having skipped town, Congress passed a similar proposal. Lincoln, as president, signed it into law in April 1862, allowing enslavers in Washington to receive reparations for the economic loss that freedom for others caused them.

A list of recipients of these payments reads like a who’s who of Washington society. Multiple members of the prominent Carr, Naylor, Throckmorton, Fenwick and Scott families received payments. The founders of the Willard Hotel, Henry Augustus Willard and Joseph Clapp Willard, received $2,430.90 for six enslaved people. William Thomas Carroll, a descendant of a wealthy Maryland slaveholding family and clerk of the Supreme Court, received $1,182.60 for three people. Francis Preston Blair Sr., an adviser to Lincoln, got a payment; so did the Sisters of Visitation of Georgetown. One person, George W. Young, received nearly $18,000 — about half a million in today’s dollars — for 69 people he enslaved.

Some names conspicuously do not appear, because one had to take a loyalty oath to receive the funds. So, for example, Rose Greenhow, an important Washington society woman who was also working as a Confederate spy, doesn’t appear to have gotten a penny.

There are a few payments to people noted as “colored.” This reflects one of the strange pathways to freedom many African Americans had carved. People who were born free or became free would often save up and purchase other family members. Some Black Washingtonians, who technically held the deeds to family members, may have seen an opportunity by also applying for compensation. Their payments were generally smaller than those given to White enslavers; for example, a Black man named Gabriel Coakley received $1,489.20 for eight people with the same surname, probably his wife and children.

It is unclear how many, if any, newly freed people took the $100 payment to leave.

A century ago, Mississippi’s Senate voted to send all the state’s Black people to Africa

In the end, about $1 million was given to Washington enslavers, the vast majority of whom were already wealthy. Since there was no income tax at the time and the federal budget was largely composed of customs duties, it isn’t really accurate to say this came from taxpayer dollars, but it certainly came from public money collected to benefit the nation.

These days, that $1 million given to 966 people would be worth $28.6 million — to say nothing of the wealth produced by investments of that money over generations. April 16, the day the Compensated Emancipation Act went into effect, is now celebrated as Emancipation Day in the District.

The word “compensated” is mysteriously missing.

Gillian Brockell writes for The Washington Post's history blog, Retropolis. She has worked for The Post since 2013. As a video editor, she was nominated for an Emmy and won an NABJ award for producing the commentary series “TL;DR.” Previously, she was a producer at Federal News Radio and a flight attendant for JetBlue Airways. Her writing has appeared in Cosmopolitan, Fodor's Travel and The Washington Post Magazine. Email. Twitter. Instagram. RSS.