books The American Myths of Bigger and Better

This author's apparent attempt to save the MAGA ideology from the far right, says reviewer Washington, "is in the end a dangerous nationalist concoction, based on an ideology that takes losers as a must and broadens existing divisions." 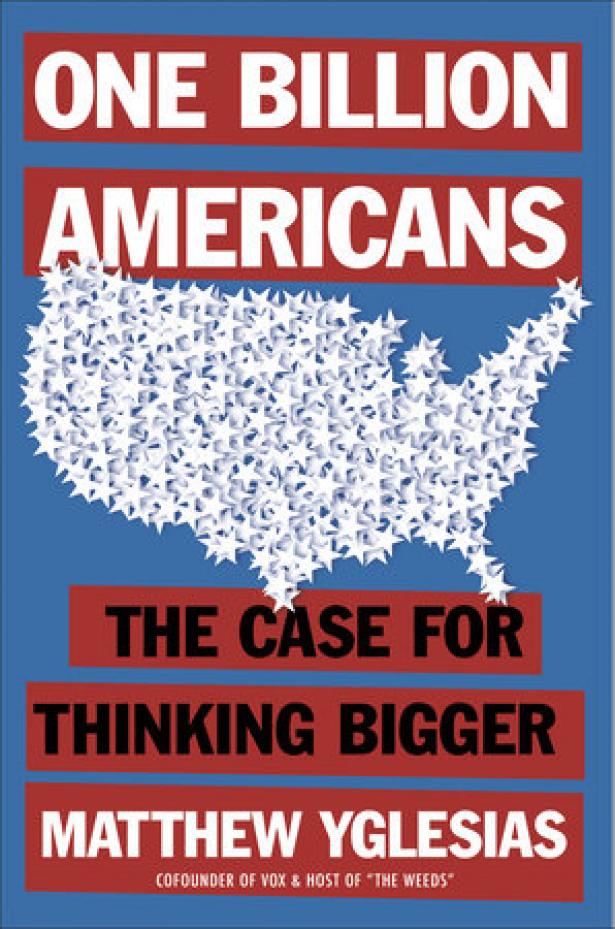 There are great things about the United States, sure—stomping the British in the Revolutionary War, inventing the airplane, jazz, the NBA. But an endless insistence on our “greatness” is definitely not one of them. American exceptionalism is not just untrue, it’s a sign of ruthless competitiveness that prioritizes a dubious ideal over human decency, human rights, and human life.

Much of the Left’s criticism of Trump’s MAGA sloganizing has hinged on the last “A”: What did he mean by again—was he referencing some supposed heyday before #MeToo, before the Civil Rights Act, or before the 19th Amendment? But you could drop the final A off the MAGA hat and still have plenty to quibble with: What does “great” even mean—great for whom, great in what guise?

None of these questions are raised in Matthew Yglesias’s new book, One Billion Americans, which is basically a policy recipe for American Greatness. The title, in his view, is both the goal and the means. According to Yglesias, through pro-natalist and selectively pro-immigration policies, the American population can quickly grow to about three times its current size, hit the one-billion mark, and thus be both big and great. Why America must be great, Yglesias addresses only in the most jingoistic of ways: to beat China, to be “greater than ever,” or to “stay number one forever.”

A founder and former staff writer at the online media outlet Vox, Yglesias recently left his job to return to blogging. One of his first articles at his new blog Slow Boring was “Make Blue America Great Again.” After four years of dangerous and sometimes deadly indecency under Trump, it’s dumbfounding to see an alleged left-leaning media personality openly embrace the Trumpian slogan.

But despite the schoolyard insistence on “winning,” the details of his argument may be an example of the means justifying the ends. Bigger can also imply, in Yglesias’s telling, extending support to parents and welcome to immigrants. Instead of insisting on superlatives amidst spiking inequalities and insurgent fascism, we should be striving toward policies that are socially responsible and work to establish decent baselines.

Dipping into family assistance policy, housing and immigration reform, and even touching on traffic control, Yglesias loosely sketches out a basic road map of how the country might squeeze in one billion people. He also assuages unsubstantiated fears of overcrowding. But Yglesias’s platter, composed of mostly healthy ingredients, is in the end a dangerous nationalist concoction, based on an ideology that takes losers as a must and broadens existing divisions. He sells the policies not as sound and responsible in and of themselves, but as means to greatness.

In his first chapter, “A Very Short History of American Power,” Yglesias only seeks to measure national power, not question it. Much of his obsession is with China, and whether or not China is already richer or bigger, or can throw farther than the United States. Clocking the race between the two countries, he hopes for “Chinese blunders” even as he recognizes they could spell catastrophe: “While from a standpoint of international competition [China’s blundering] might be nice to see, from a humanitarian perspective it would be a disaster.” What, this reader wonders, does Yglesias count as a “blunder”? To compartmentalize, say, the re-education camps in which China has forced as many as one million Uighurs, while gloating that at least the United States is “winning,” is a heartless, divisive, and dangerous project. He doesn’t recognize that it is competition itself that sparks such disastrous blunders.

This is the problem with a writer gaveling their conclusions instead of arguing toward them. “A bigger country will be a richer country, and that will be good for everyone,” Yglesias writes. Oh really? Each U.S. expansion over the last 200 years was basically a heedless stampede over the bodies of Black and Indigenous people. “Obviously, this is all a gross simplification” writes Yglesias in a weak-tea defense of his “bigger is greater” premise—but gross simplification happens to be the opposite of what a book should do.

Bigger, in nationalist terms, is not inherently better. Better is not even necessarily better. As inequalities abound, the celebrated achievements of so-called progress, innovation, or disruption are too often coupled with exploitation and the further entrenchment of racism. Obliviousness to history’s victims is abundant in this book. On the very first page, Yglesias is already celebrating that America sought to “settle the West, beat the Nazis, win the Cold War.” Beating the Nazis was grand, but “settling the West” included genocide, and “winning” the misnomered Cold War meant hotly—and murderously—waging it in Asia, Africa, the Middle East, and Central America. Take the Korean War, one of the Cold War’s so-called “proxy wars,” for example: The U.S. dropped more bombs on Korea than it dropped on the entire Pacific theater during World War II, and firehosed much of the countryside with napalm. In that war, an estimated 2–3 million civilians were killed.

How else can an innocent call for a bigger America be dangerous? Yglesias’ exultant prescription follows the same pattern we have seen for more than 150 years: growth as crutch, growth as safety valve. Greg Grandin explains the legacy of U.S. growth dependency in his illuminating 2019 book, The End of the Myth. The concept of the frontier, the drive ever outward, ever greatward, “served as both diagnosis (to explain the power and wealth of the United States) and prescription (to recommend what policy makers should do to maintain and extend that power and wealth).” When the U.S. ran out of continental frontier at the Pacific Ocean, and when actively colonizing other states was no longer acceptable, the concept of the frontier was “applied to other arenas of expansion, to markets, war, culture, technology, science, the psyche, and politics.” It was growth, Grandin writes, that “allowed the United States to avoid a true reckoning with its social problems, such as economic inequality, racism, crime and punishment, and violence.” Yglesias falls into that familiar trap.

What might be worth saving in Yglesias’s project is his work to mitigate the nativist fear of the other. Welcoming foreigners would be a boon for the country that we could manage with policies for better funding of public transportation, education, and childcare, taxing “bad things” like carbon emissions, and reducing funding for military intervention. Even welcoming a lot of foreigners, quickly, would be a net positive, and shouldn’t provoke worry about a run on resources. “America turns out to have 8,800 cubic meters of fresh water per person,” Yglesias notes. “If our population tripled, we would have 2,900—quite a bit less. Yet Spain gets by with 2,400; the UK has 2,200; Germany has 1,300; and the Netherlands has 650.” The penchant for such stats is where Yglesias excels. These ideas might be better formatted into a few charts or infographics than in a book, though his vision of what a more populated but more sustainable America would look like illustrates that we really do have room to spare: “So when you picture a land of one billion Americans, don’t imagine an endless sea of gleaming skyscrapers or a vast horrendous slum. Imagine France.”

If only Yglesias similarly tempered America’s claims to exceptionalism.

John Washington is the author of The Dispossessed: A Story of Asylum at the U.S.-Mexican Border and Beyond. He is a regular contributor to The Nation and The Intercept, and an award-winning translator. A long-term volunteer with No More Deaths, he has been working with activist organizations in Mexico, California, Arizona, and New York for more than a decade.
Subscribe to Portside