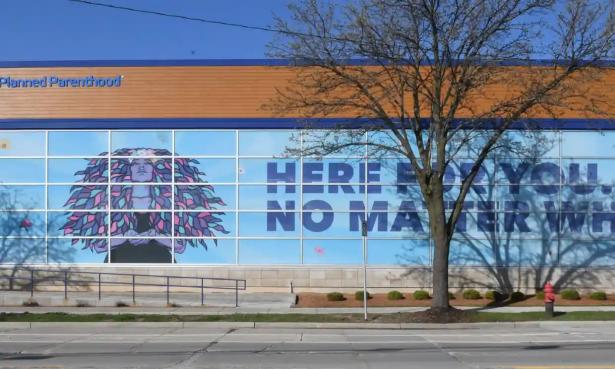 Workers at reproductive rights groups say they want a union to ensure they give the best care if Roe is overturned, Photograph: Mark Hertzberg/Zuma Press Wire/Rex/Shutterstock

As reproductive rights groups brace for an anticipated US supreme court decision to overturn Roe v Wade and strike down federal abortion rights in America, workers at these groups are organizing to unionize ahead of the expected legal changes.

About 400 workers at 28 clinics in five states in the midwest – Minnesota, Iowa, Nebraska, North Dakota and South Dakota, announced in late May 2022 their intent to unionize with SEIU Healthcare Minnesota and Iowa. They have filed for a union election with the National Labor Relations Board after a majority of workers signed authorization cards and their request for voluntary recognition was turned down by management.

“Filing before the Roe decision comes out and before the CEO of Planned Parenthood North Central States Sarah Stoelz leaves was really important, just because of what’s going on in the country right now. It is kind of an emergency and we want to be able to provide better care to our patients,” said April Clark, a registered nurse and senior training specialist in Iowa. “Everything is going to be changing really quickly once the Roe decision comes out, if it comes out the way we expect it after the leak.”

On 2 May, a draft opinion from the supreme court was leaked to the news website Politico, striking down the 1973 Roe v Wade ruling that affirmed the constitutional right to abortion, with an anticipated final ruling that would allow states to decide whether to restrict or ban abortion.

Reproductive rights workers have said they need a union to support their working conditions while taking on the challenges to come with the scaling back of abortion rights in the US.

Clark explained that clinics in Iowa have already been seeing an uptick in patients from out of state and that problems such as high turnover rates at Planned Parenthood need to be addressed through a union.

“We really can’t even safely maintain clinics now with our staffing, much less once the need gets higher. They’re constantly pushing to have less staff in the clinic and at the same time do more, and we want to make sure we can provide safe care to patients,” Clark said.

Workers also cited pay inequity, low pay and workers’ concerns being ignored by management as a few of the issues they are seeking to address through a union.

“There’s such a massive disconnect between the executive leadership team and folks on the ground who are running the day-to-day operations of Planned Parenthood,” said Ashley Schmidt, a training and development specialist at Planned Parenthood in Nebraska and western Iowa. “It’s really hard for us to give the excellent patient care that we want to be giving because we just don’t have the resources or they’ve taken the resources that we want to use away from us.”

An election date hasn’t been set by the NLRB, but workers are expecting mail-in ballots to go out some time in the next few weeks.

In an email, Molly Gage, vice-president of human resources at Planned Parenthood North Central States, said: “We support employees’ decisions about whether to be represented by a union and want every union-eligible employee’s voice to be heard.”

About 200 workers at Planned Parenthood in Massachusetts are also seeking to unionize with 1199 SEIU.

“Myself and my co-workers, especially folks in the health center, we are understaffed, underpaid and overworked,” said Andy Saltzberg, who works in a Planned Parenthood clinic in Worcester, Massachusetts. “We need to make sure that workers on the ground that are providing abortion care have everything they need, we need to make sure that they are heard and valued.”

In response to the unionization efforts, the CEO of Planned Parenthood League of Massachusetts sent an email to all workers encouraging them to vote against a union, citing the overturning of Roe v Wade and claiming the union is a third party.

In an emailed statement, Planned Parenthood League of Massachusetts did not address the email sent to workers, but their CEO, Dr Jennifer Childs-Roshak, stated, “PPLM respects its workers’ right to organize in favor of a union, which is why we are actively working with the NLRB to facilitate an election later this month, giving every eligible employee the opportunity to fully understand the process and make their own choice. PPLM will honor the results of that election.”

At the Guttmacher Institute, a reproductive health research and policy organization based in New York and Washington DC, 61 workers are seeking to unionize, with mail-in ballots due at the NLRB on 27 June. The non-profit hired the union avoidance firm Jackson Lewis ahead of the election.

“With the upcoming Roe decision, we really need a more supportive and sustainable Guttmacher and I feel like the best way to go about that is giving staff a seat at the table and by unionizing,” said Ashley Little, a research assistant at Guttmacher. “Both abortion and workers’ rights are about having control of the decisions that affect your life, and if we’re going to continue on in a post-Roe America, workers need to have a say in their lives.”

A spokesperson for Guttmacher said they offered voluntary recognition, but with restrictions, which the workers declined due to those stipulations.

“Our CEO has been very clear from the moment a group of employees expressed their intention to form a union that she fully respects staff’s right to organize, and that management will not oppose or in any way interfere in that process,” said the spokesperson. “Guttmacher management has and will continue to encourage staff to participate in this election and exercise their right to vote.”

… a rollback of reproductive rights in America will have devastating consequences for the health, dignity and autonomy of millions of people. Healthcare will become even more unequal, the country’s divisions more pronounced.

The Guardian views reproductive freedom as a fundamental human right. We are committed to reporting the ongoing and widespread attacks on reproductive rights. We will focus on the people most impacted by abortion bans and we will track what the decision could mean for other constitutional rights, like marriage equality and access to contraception. And, as a global news organization, we will report from around the world on whether the potential shift in the US could affect policies overseas.

We need your support for this work. Tens of millions have placed their trust in the Guardian’s fearless journalism since we started publishing 200 years ago. More than 1.5 million supporters, from 180 countries, now power us financially – keeping us open to all, and fiercely independent.

We provide our journalism for free, for everyone to read. We do this because we believe in information equality. Millions can benefit from open access to quality, truthful news, regardless of their ability to pay for it.

If there were ever a time to join us, it is now. Every contribution, however big or small, powers our journalism and sustains our future. ​​