Did Trump’s Actions on January 6 Reach the Level of Treason?

The hearings have shown, Donald Trump was in the room. Was it treason? The framers of the Constitution had “a very specific image in mind — men gathering with guns, forming an army and marching on the seat of government.” 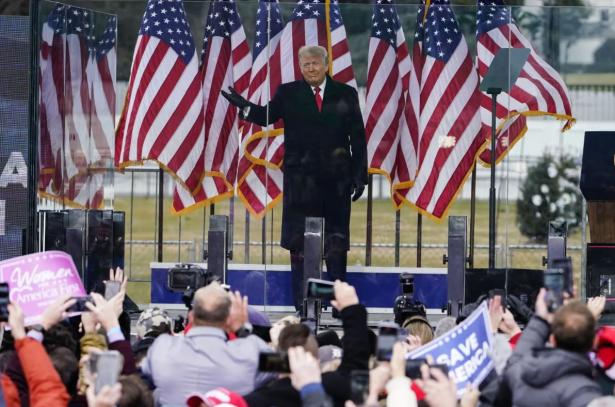 Then-President Donald Trump speaks at a rally on Jan. 6, 2021, to a crowd that later joined in the storming of the Capitol.,Jacquelyn Martin/AP Photos // Chicago Sun-Times

Will Donald Trump be held accountable for the attack on the U.S. Capitol on Jan. 6, 2021 and what was a multi-layered conspiracy to overturn the results of the presidential election?

Attorney General Merrick Garland has stated that, “We’re just going to follow the facts wherever they lead ... to hold all perpetrators who are criminally responsible for January 6 accountable, regardless of their level, [or]their position...”

The House Select Committee to Investigate the January 6th Attack has systematically revealed the facts, confirming what Republican Rep. Liz Cheney stated when she announced she would vote to impeach Donald Trump:

“On January 6, 2021 a violent mob attacked the United States Capitol to obstruct the process of our democracy and stop the counting of presidential electoral votes. This insurrection caused injury, death and destruction in the most sacred space in our Republic...,” Cheney said.

“The president of the United States summoned this mob, assembled the mob, and lit the flame of this attack. Everything that followed was his doing. None of this would have happened without the president,” she said. “The President could have immediately and forcefully intervened to stop the violence. He did not. There has never been a greater betrayal by a president of the United States of his office and his oath to the Constitution.”

The committee’s investigation has confirmed what Senate Republican Leader Mitch McConnell stated: “The mob was fed lies. They were provoked by the president and other powerful people, and they tried to use fear and violence to stop a specific proceeding of the first branch of the federal government which they did not like.”

This is a question of treason, a charge that should not be made lightly.

The Constitution defines the crime: “Treason against the United States shall consist only in levying War against them, or in adhering to their Enemies, giving them Aid and Comfort.”

Do Trump’s actions meet the test of treason? Professor Carlton F.W. Larson, author of “On Treason: A Citizen’s Guide to the Law” notes that the framers of the Constitution had “a very specific image in mind — men gathering with guns, forming an army and marching on the seat of government.” Larson notes that few events in American history have matched that description as clearly as the sacking of the Capitol on Jan. 6.

Their purpose assaulted the very heart of democracy: trying to stop the congressional proceeding that would formally certify the transfer of power following a democratic election. As Larson noted, “At some point, you have to say, if that’s not levying war against the United States, then what on earth is?”

The Justice Department has prosecuted over 800 people who participated in the attack on the Capitol. The most serious charges were directed at leaders of the Proud Boys and the Oath Keepers, gangs that conspired to breach the Capitol in order to stop the proceedings and possibly kidnap or kill public officials.

They were charged, and some have pled guilty to, seditious conspiracy. They thought they were doing the bidding of Trump.

Reviewing the evidence in a hearing on whether to honor the subpoenas of the committee, a federal judge found that Trump had “most likely” committed at least two crimes: obstructing an official proceeding and engaging in a conspiracy to defraud the United States. He was not asked to rule on whether Trump had committed treason.

Prosecuting a former president is something that no prosecutor would take on lightly. A trial would no doubt be a bitter national trauma.

Yet, the very essence of the rule of law is that no person — not a governor or a general, a billionaire or an oligarch, or even a former president — is above the law.

Trump’s responsibility for the crimes that occurred is clear. And worse, he not only has expressed no remorse for his actions, he has spread the Big Lie relentlessly, and enlisted partisans across the country to attack election officials, change election laws, and leave the country more vulnerable to another assault on democracy.

Accountability under the law serves as a deterrence for those who would seek to violate it in the future. That is why the Justice Department has prosecuted 800-plus perpetrators with more to come. And that is why the attorney general must follow the evidence and bring to justice all those responsible for the attack, including the undeniable instigator: Donald Trump.