Young people are with this movement because they understand it is not about left and right and the normal politics — it’s about right versus wrong. 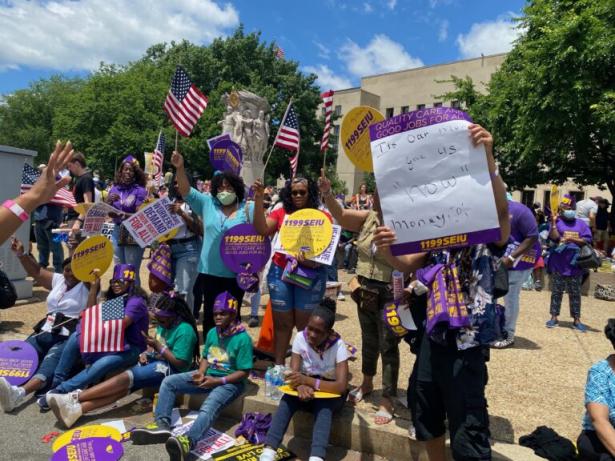 This past Saturday union activists, their families and their supporters came by the thousands to the nation’s Capitol to answer the  Poor People’s Campaign’s call for a moral march on Washington. The racially diverse crowd extended for several long blocks.

The organizers of the Poor People’s and Low Wage Workers’ Assembly and Moral March on Washington and to the Polls,  estimate there are 140 million low-wage and low-wealth Americans that made up 35 percent of the nation’s electorate in 2020.

According to the Rev. Dr. William Barber, co-chair of the Poor People’s Campaign, this makes this cohort of under-appreciated voters a “a sleeping giant” whose ballot choices could decide the outcome of dozens of swing district races that will determine who controls Congress.

A significant portion of the march’s attendees had not been born yet when Dr. Martin Luther King issued his call for the original Poor People’s Campaign more than a half-century ago, that he did not live to see. Throughout the five-hour program, which featured dozens of union, social justice, anti-militarist, climate change and human rights speakers, it became evident that the activist torch had been passed from the 20th Century into the 21st.

“Young people are with this movement because they understand it is not about left and right and the normal politics — it’s about right versus wrong,” Rev. Dr. William Barber, the co-chair of the Poor People’s Campaign, told LaborPress just before the program started. He cited  union organizing drives at Amazon, Starbucks and Dollar General as well as campaigns for peace, reproductive rights, gun control, universal healthcare, and social justice as converging in a “moral fusion of everybody” sufficient to “change this country.”

“54 years ago, my father launched the Poor People’s Campaign to revolutionize the economic landscape of our nation,” Rev. Bernice King, Dr. KIng’s youngest daughter, told the large crowd. “Unfortunately, Dr. Martin Luther King did not live long enough to see it come to fruition. However, on June 19, 1968 my mother Coretta Scott King was here in our nation’s Capitol during the initial Poor People’s Campaign…and she made the appeal that poverty is not a longstanding evil of the nation, but an actual act of violence against the dignity, livelihood, and the humanity of its citizens.”

Rev. King, who is also an attorney, continued, “Fifty-four years later poverty still has a grasp on the soul of our nation. So, today as the bearer of my parents legacy,  as the CEO of the King Center, I join in solidarity with the chorus of voices that say we won’t be silent anymore.”

“This level of poverty and greed in this, the richest nation in the history of the world, constitutes a moral crisis and a fundamental failure of the policies of greed,” proclaimed Rev. Barber, as he convened the marathon program. “The regressive policies which produce 140 million poor and low-wealth people are not benign. They are forms of ‘policy murder’.”

The latest iteration of the Poor People’s Campaign comes as nationally labor union membership, something King championed, is down to  10.3-percent overall, down by half since the early 1980s. Close to a third of the public sector is represented by a union.

Over the last several months, in the midst of the COVID pandemic, there’s been a 57-percent increase in petitions being filed by workers seeking a union with the National Labor Relations Board, in the first half of Fiscal Year 2022 to 1,174.

“No contract-no coffee,” shouted Nikki Taylor, with Starbucks Workers United when it was her turn to address the crowd. “With Starbucks’ billions, Starbucks workers should not be poor people…Most of us are making under $15 an hour.” Taylor is one of the ‘Memphis Seven’ who was fired for their organizing efforts, which so far has resulted in 160 locations voting to unionize. “Six months ago, there was zero,” Taylor added.

Back in April, organizers of the independent Amazon Labor Union, led by Chris Smalls, won a landmark organizing vote at Amazon’s Staten Island location where 2,654 workers voted YES for a union, besting the NO vote that garnered 2,131. Amazon is contesting that victory. ALU lost a subsequent vote at an adjacent much smaller facility that relies on part-timers.

“I was inspired by Chris Smalls with his efforts with Amazon and what it brought about,” Rev. King told LaborPress offstage at the march. “We are in a season of great sacrifice, and we have been in this kind of period of time when people have not understood that Daddy and them had to put a lot on the line, and that’s where we are now. And so, wherever these young people are when they organize, they mobilize, they strategize — they can plan and change comes that way. It’s not instant, oftentimes, but it can come and it can be inspired by efforts like Chris Smalls.”

“We all know that we should not have to be here,” said Fred Redmond, secretary-treasurer of the AFL-CIO, which represents 12.5 million workers in 57 unions. “We should not have to join in the streets and march and lift our voices to put an end to poverty because poverty is a failure — it’s a failure of the system not of the people…being poor is not a crime. The crime is accepting a system that allows for poverty. Poverty exists because we allow it to exist.”

Although the date of the march did coincide with the actual anniversary of the first Poor People’s Campaign and the Juneteenth holiday, planners were aiming to inspire early engagement in the pivotal 2022 Congressional elections. While historically, voter turnout drops considerably in non-presidential years, 2018 saw a 49.4 percent turnout, the highest percentage since 1914.

“Working people understand we have to raise the stakes [this election] because the stakes are getting raised on us by denying voting rights, by denying abortion rights and healthcare and denying us the ability to join together in unions,” Mary Kay Henry, president of SEIU, told LaborPress after she spoke at the march. “So, we have to turn out in record numbers in 2022.”

The night before the march, organizers and activists held an intimate sunset memorial service at the base of the Lincoln Memorial to mourn the victims of the COVID pandemic. Over one million Americans died during the pandemic and there’s no registry of the many thousands in public-facing jobs who died and worked in government, healthcare, transit, utilities, emergency services, retail, agriculture or food service.

Back in April, the Poor People’s Campaign released the first of its kind comprehensive study of COVID deaths in over 3,000 U.S. counties that plugged in the intersectionality of poverty, income, race and geography. What the data revealed was that the residents of poorer neighborhoods were anywhere between twice to five-times more likely to die than people living in wealthier counties. Public health experts have linked pre-existing chronic illnesses, along with limited access to health care, as contributing factors to the disparity in how communities fared during the pandemic.

“Remember, this unnecessary death happened while we gave corporations $2 trillion to keep them alive and the richest Americans  saw their wealth soar,” Rev. Barber told reporters when the report was released. “It’s a gross example of what Naomi Klein has called the ‘shock doctrine’, when the wealthy exploit tragedy to increase their own profits while poor people suffer.”

[Robert "Bob" Hennelly is an award-winning print and broadcast journalist. He is currently the City Hall reporter for LaborPress, a New-York-City-based news source on regional and national labor issues. He hosts a morning drive time program on WBAI (Pacifica in New York) 99.5 FM every Monday at 7 a.m. EST on labor issues. He is also a regular contributor to Salon, Insider NJ, and WBGO-Newark Public Radio. Prior to joining LaborPress he covered the global economy for CBS MoneyWatch. From 2003 until 2013, he was a senior reporter for WNYC-New York Public Radio, where he also was a National Public Radio contributor. Prior to WNYC, he served as a national correspondent for Pacifica Network News. Prior to Pacifica, he was on staff at The Village Voice. He has been a freelance reporter for CBS’s “60 Minutes” and in New Jersey for The New York Times. His writing has also been published by The Detroit Free Press, The Miami Herald, The Christian Science Monitor, The Bergen Record, the Star Ledger and The Guardian. His work has also been featured on Alternet, Raw Story, Portside and Real Clear Politics.]