A sketch in his notebook might become the basis for a comic, Schumann said. "Instead of leaving it hidden on those pages," he said, "start drawing away and make it public. 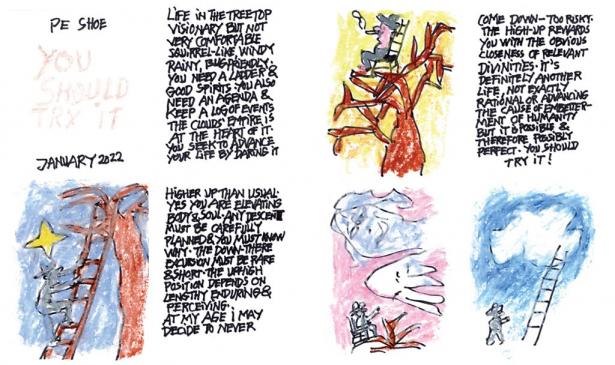 Five o'clock in the morning is a "preferred time" for Peter Schumann to make comics, he said. Ideas can come from just about anywhere: the weather in the Northeast Kingdom, where he lives, or a piece in the Monthly Review, a long-running socialist publication. "I go by what's happening in the world," he said.

Schumann, 88, is a visual and performing artist — painter, sculptor, puppeteer, dancer — who's best known for founding Bread and Puppet Theater 60 years ago. For those many decades, he's also drawn comics, hundreds of them.

Schumann started writing and drawing comics in the early 1960s on the Lower East Side of Manhattan, where he recalls "hawking" them at the Astor Place subway station. He sold his chapbooks for 25 cents apiece — or two for a dime, three for a nickel.

"Ever since, we are millionaires from those sales," he joked.

These days, the cost of a Schumann comic defies an inflationary economy. At its street shows, Bread and Puppet's Parking Lot Dance Co. hawks comics for 50 cents apiece, two for a quarter and three for free.

A sketch in his notebook might become the basis for a comic, Schumann said. "Instead of leaving it hidden on those pages," he said, "start drawing away and make it public.

"The combination of what imagery you use, and the wording, and you oppose them or meld them together, that's what's interesting," he continued. 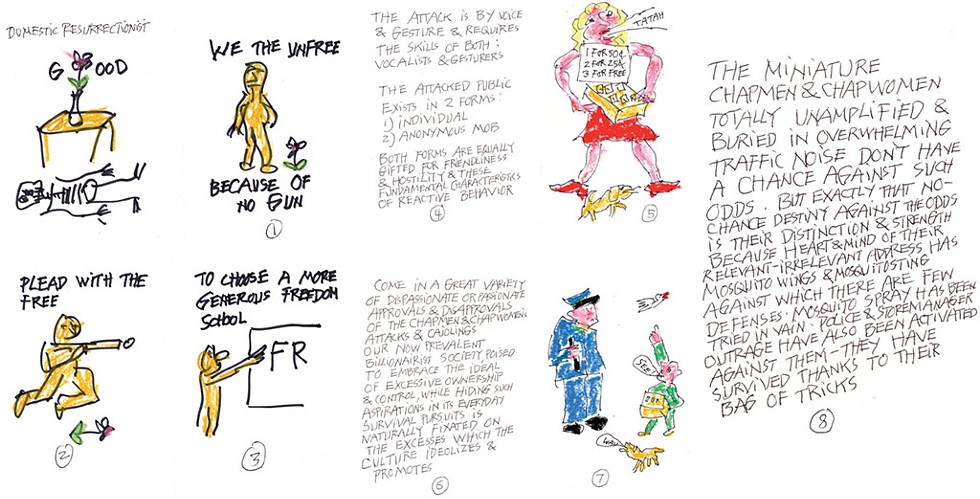 Schumann's drawings and comics are used as "story-making material" for puppeteers when the company is working on its annual summer show. Our Domestic Resurrection Circus, whose theme this year is "Homosapiens reform," will be presented at Bread and Puppet's home base in Glover on Sunday afternoons from July 10 through August 28.

The kind of storytelling seen in the pageant — which incorporates images, words, music and dance — spans cultures and centuries, Schumann said. He has vivid memories of watching such shows — called Bänkelsang — as a child in his native Germany.

"I was very impressed," Schumann said of those shows. "It's not in the palace; it's in the street." Much like a chapbook sold on a sidewalk: one for a quarter, two for a dime, three for a nickel.

Sally Pollak is a staff writer at Seven Days, where she mostly covers food and drink. Her first newspaper job was compiling horse racing results at the Philadelphia Inquirer.

Founded in 1995 by Pamela Polston and Paula Routly, Seven Days is now owned and run by Routly and a group of longtime employees.

Seven Days provides its award-winning journalism free of charge thanks to financial support from its advertisers and from grateful "Super Readers" who make one-time or monthly contributions.