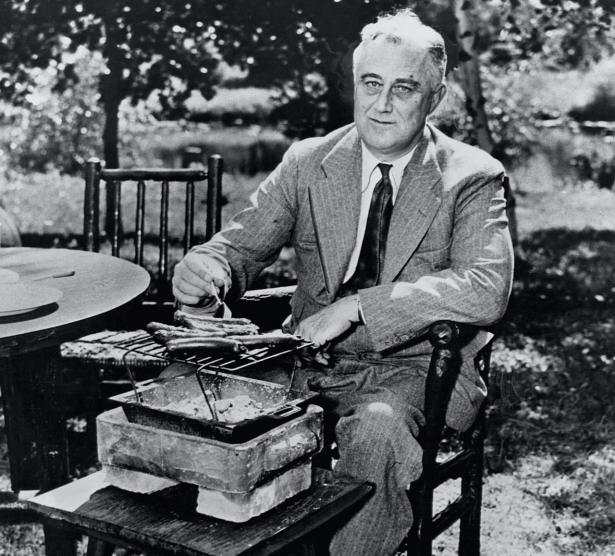 WHEN KING GEORGE VI OF Great Britain visited American President Franklin Delano Roosevelt in 1939, war was looming in Europe. But for one brief moment, all that mattered was hot dogs.

The king and his wife, Queen Elizabeth (mother of the current queen), had traveled across the Atlantic for an official state visit, with an itinerary that included a trip to the Roosevelt family estate in Hyde Park, New York, where First Lady Eleanor Roosevelt had planned a picnic lunch. It was an intentionally informal affair that swapped the White House dining room and champagne toasts for a countryside porch and casual conversation—including instructions on how, exactly, to eat the meal’s centerpiece.

“The king looked at the hot dog and said, ‘What should I do?’” the Roosevelts’ son James recounted years later. “My father said, ‘Put it in your mouth and keep chewing until you finish it.’”

This wasn’t the first time the Roosevelts had hosted such a meal for world leaders—they had served hot dogs when Crown Princess Louise of Sweden visited Hyde Park in 1938. But the picnic with British royalty turned into a media frenzy. Newspapers on both sides of the Atlantic reported every detail: the paper plates, the royals ditching their usual protocol and shaking hands with guests, Eleanor Roosevelt’s casual attire of “an old rose and white cotton sport suit,” the fact that King George asked for seconds and washed it all down with beer.

The menu also included Boston brown bread and strawberry shortcake, but it was the hot dogs that made headlines. In the years that followed, they became the central feature of the collective memory of the event, mentioned in obituaries when King George VI died in 1952 and in news coverage when the Hyde Park residence went on the market in 1968.

But the event had a larger legacy. It kickstarted an enduring tactic of American international relations: hot-dog diplomacy.

AS THE ROOSEVELTS SEEMINGLY UNDERSTOOD, the central and overlapping selling points of a hot dog—beyond being tasty—are convenience, informality, and adaptability. They’re simple, handheld foods that you can eat by themselves or gussy up in an infinite number of ways. The National Hot Dog and Sausage Council counts 18 regional variations, though surely there are more, each representing distinct cultural identities and traditions. But at their core, each hot dog is still merely and magnificently the same thing, and maybe the closest the United States has to a national dish.

That broader symbolism has grown over the years, but it was already a work in progress when the Roosevelts held their picnic in 1939.

“So often when we try to define a national food culture in the U.S., it’s really difficult to do so,” says Smithsonian food historian Dr. Ashley Rose Young. “In the modern context, people often cite things like McDonald’s or international fast food cultures. But if you go back to the 1800s or even through 1950, when you would ask someone to define American culture, they would go through regional cultures, and the hot dog was a regional food that was gaining popularity outside of the Northeast.”

The key to the hot dog’s spread was baseball. In the early 1900s, as the sport gained a reputation as the national pastime, media outlets extolled it as “a place where immigrants can learn America,” embodying ideals about the rule of law and meritocracy, says Dr. Seth Tannenbaum, assistant professor of sport studies at Manhattanville College. After stadium vendors in the Northeast started selling hot dogs, sometime around 1901, the food gained a similar reputation as what Tannenbaum calls “a supposedly democratic food within the supposedly democratic atmosphere of the baseball stadium.”

One vendor at the Polo Grounds in New York, Harry Stevens, is often credited with being the first to sell hot dogs at a ballpark. Tannenbaum’s research has shown that this is incorrect—other people were selling them before this—but Stevens did help solidify the conceptual relationship between food and pastime, thanks to an interview with The New York Times in 1924. “If I were poetic, I would say that one touch of the frankfurter made the whole world kin,” Stevens said. “At the counters in the rear of the Polo Grounds, you would find a prominent banker eating a frankfurter and drinking a glass of beer, and beside him would be a truck driver doing precisely the same thing.”

The same ideals underpinned the picnic at Hyde Park. It was a chance for both American and British leaders to relax but also, critically, to show off their common touch. It let the king and queen participate in a “more egalitarian kind of culture than they had in Europe, because of how the hierarchy worked and how royalty was treated,” Young says.

IMMEDIATELY AFTER THE ROOSEVELTS’ SAUSAGE feast, hot dogs became a fad food in the United States: retailers sold an additional 1 million pounds in the following months, and “society belles” ate them at parties in London.

Their elevation to a staple of diplomacy was equally swift. Fifteen days after hosting King George VI and Queen Elizabeth, the Roosevelts had the crown prince and crown princess of Norway over for the same meal. Two days later, the American embassy in France “served the delicacy without the bun” to diplomats and “French society in Paris.” And in 1943, during World War II, the U.S. embassy in Moscow held a Fourth of July party featuring “hot dogs with buns and mustard; punch with vodka.”

While the first decade or so of hot-dog diplomacy could be chalked up to the burst of initial media attention, its endurance signaled a more intentional effort by American diplomats and their counterparts. In 1954, the American government airlifted 100 hot dogs and buns (and “a supply of mustard”) to the newly crowned Queen Elizabeth. Two years later, the Queen herself got in on the act, serving hot dogs at Buckingham Palace for visiting members of the American Bar Association, who reportedly enjoyed the homestyle meal and took advantage of the relaxed protocols to smoke cigarettes and cigars “all over the 42 acres of the lawn—something that guests to the Queen’s garden parties are not supposed to do.”

Hot dogs, and the sense of aw-shucks egalitarian fun they can embody, offered a low-key display of American ideals, and by inviting other leaders to join the feast and play a part in the production, American officials offered them a chance to portray themselves as regular folks. This fit conveniently within the United States’ postwar “soft power” kick, which promoted national identity and might through culture and non-military means.

The most famous soft-power effort of the era was the Marshall Plan. There was also, among others, the Jazz Diplomacy program, which sent musicians including Dizzy Gillespie and Louis Armstrong abroad as unofficial emissaries, promoting American culture and, the government hoped, subtly endorsing American policies and power. This cultural battle was a hallmark of the Cold War, with the Soviet Union funding competing displays and, most bizarrely, the CIA funding modern art and buying paintings detested by taxpayers.

It’s not surprising that food was part of this broader campaign—the art of “gastrodiplomacy” dates back to ancient Rome, and it’s taken off in the last century, with other prominent examples including Thailand’s promotion of pad thai, Chairman Mao’s mangoes, and Peru’s recent push to be the next big culinary trend. In 2012, the United States launched the Diplomatic Culinary Partnership, formally establishing the country’s gastrodiplomacy decades after the Roosevelts started the unofficial version with their picnic at Hyde Park.

In every case, media coverage of hot-dog diplomacy is almost as important as that meal itself. There always seem to be cameras present, or at least reporters, all of them eager to feast on the spectacle of powerful people eating street food. And while American leaders popularized hot-dog diplomacy, the master of it may have been Soviet Premier Nikita Khrushchev. During a trip to the Des Moines Packing Co. in Iowa in 1959, while eating hot dogs with Henry Cabot Lodge, the U.S. ambassador to the United Nations, Khrushchev asked, “Capitalist, have you finished your sausage?” “Yes, we capitalists get hungry, too, you know,” Lodge replied. The cameras clicked, the two men had a laugh, and the hot dogs—and the leaders’ camaraderie while eating them—were headlines the next day, a diplomatic win for all involved.

The process of making a hot dog is, famously, not one that most people want to know about in detail, and the same could be said of the national mythology that hot dogs ostensibly embody: look beyond the surface and the reality can be off-putting. The precise symbolism of hot-dog diplomacy—we’re all friends and there’s no formality or discord here—doesn’t always stand up to scrutiny, but those egalitarian ideals remain a strong marketing tool.

In recent years, French President Nicolas Sarkozy got a double serving of hot-dog diplomacy, first at the Kennebunkport vacation home of then-President George W. Bush, in 2007, and then, in 2010, a meal of half-smokes at Ben’s Chili Bowl in Washington, DC, with President Obama. Three months later, during a trip to New York City, British Prime Minister David Cameron lunched at a Central Park hot dog cart with Mayor Michael Bloomberg. The meals were covered with the usual, mostly charmed amusement in the press (although Cameron caused a minor outrage in Britain because he didn’t use any mustard).

In 1999, President Bill Clinton met with Israeli Prime Minister Ehud Barak and Palestinian Authority President Yasser Arafat in Norway, with a goal of negotiating peace in the Middle East. The three men ended the session by sharing a meal of hot dogs—a symbol of kinship and egalitarianism but also, considered another way, a reminder that small diplomatic gestures won’t fix longstanding strife.

The last time hot-dog diplomacy generated headlines was in 2009, when it appeared that tensions between the United States and Iran were starting to wane. The Obama administration told American ambassadors “they may invite representatives from the government of Iran” to their 4th of July festivities. “A New Iran Overture, With Hot Dogs,” read one story in The New York Times. A few weeks later, though, after the Iranian government violently suppressed protests following the country’s presidential election, American diplomats rescinded the invitation.

It’s only a matter of time, surely, before an American president shares another hot dog lunch with another world leader. For their part, U.S. embassies still serve hot dogs, giving them pride of place in recent announcements about events in Bulgaria, Montenegro, Italy, and Israel. While no meal between leaders is likely to top the picnic at Hyde Park as a media spectacle, and the power of hot dogs to generate headlines seems to have waned, the United States hasn’t given up on their soft-power potential. Like King George VI, American diplomats keep going back for more.