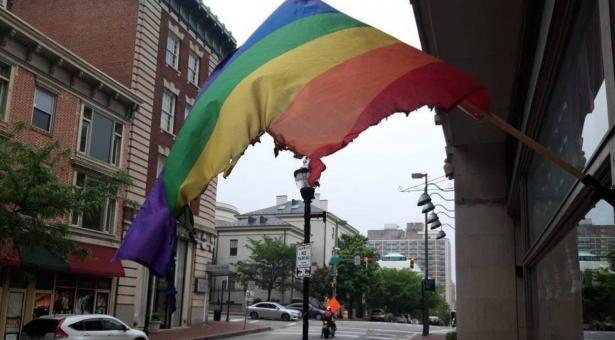 A Pride flag that was burned in Baltimore, Maryland,(Creative Commons)

Around 4:30 a.m. on June 15 in Baltimore, Maryland, just five days before the city’s Pride, two Pride flags in the Abell neighborhood were set aflame. One of the burned flags led to the hospitalization of three people and the destruction of three homes. While the neighborhood has rallied together against what is viewed by many as a hate crime, the community remains rattled.

Lisa Scotti, a nurse practitioner who works for the Baltimore Health Department with people who are HIV-positive, was the owner of one of the Pride flags targeted in this attack. Scotti was not home the night of June 15, but she woke up to a text from her roommate that read, “There’s been a situation.” When she called him, she learned that there was a fire raging across the street and that their own Pride flag had been burned as well. 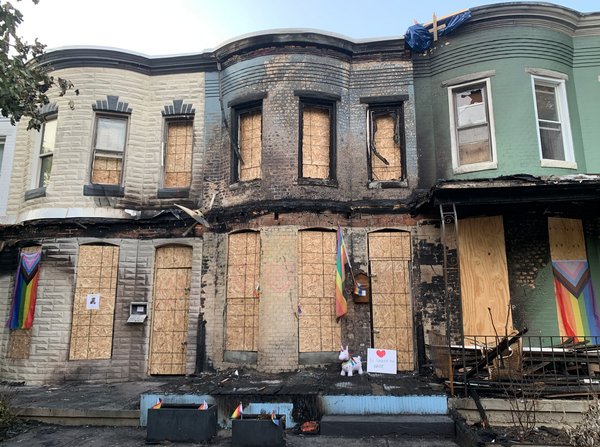 Homes that were destroyed by the fire (Creative Commons)

While Baltimore Mayor Brandon Scott has stated that this incident has not yet been confirmed as a hate crime, Scotti believes that  “something like this, which is pretty clearly a hate crime, is not something that we would ever expect in our community, and that has jarred people a lot.”

She adds that another “friend texted me that ‘we were going to put our Pride flag out, but now I’m not going to.’ They were afraid to have their flag out.”

This attack on the Abell community followed a slew of other hate-motivated crimes in Baltimore. On Trans Day of Visibility this year, Baltimore Safe Haven, a collective that serves LGBTQ+ people who are at risk of homelessness, was vandalized. And the week prior to the Abell fires, there was another arson attack, which targeted a Black-owned vegan restaurant.

Rahne Alexander, an artist and transgender woman who has lived in the Abell community for more than fifteen years, believes that, while these attacks might not be perpetrated by the same individual, they are part of a pattern of violence against vulnerable communities in Baltimore.

“This other fire happens, and I’m like ‘Well, how can we not put these two things together,’ ” Alexander says. “Even if it’s two people doing these things, the attacks are the same.”

But the Abell community is no longer afraid: Pride flags are now being proudly displayed at almost every home in the neighborhood after more than 200 Pride flags were donated by Flags for Good.

Since the attack, community volunteers have responded by painting a rainbow crosswalk in the neighborhood, and a local brewery, Peabody Heights, has raised more than $20,000 for the victims whose homes were burned in the fire.

The Abell community is one of Baltimore’s oldest queer neighborhoods, which means it has a history of being targeted by hate crimes. In 2019, for example, another Pride flag was burned outside of a Baltimore shop in what was determined to be a hate crime.

But regardless of the community’s history, Alexander believes that this incident is part of the rising wave of hate crimes against LGBTQ+ folks across the country.

In 2020, the FBI announced that more than 11,000 individuals reported hate crimes, and of those, 22 percent were targeted because of their sexuality and/or gender identity.

Alexander explains that the nature of fear mongering is to disrupt communities and to decrease security, visibility, and safety of vulnerable populations “We can’t operate under fear,” she says. “We can’t function as a community under fear.”

In addition to the highest number of reported hate crimes in the past decade, the Human Rights Campaign has tracked more than 300 anti-LGBTQ+ bills that have been introduced in state legislatures so far this year and has confirmed that we are on pace to see a record-breaking number of anti-transgender bills introduced and passed this legislative session.

The ever-increasing attacks on trans health care—including the recent reversal of Roe v. Wade, which disproportionately affects queer and trans BIPOC individuals, the “Don’t Say Gay” bill passed in Florida, and Texas Governor Greg Abbott’s directive to investigate trans children and prosecute their parents as child abusers—all seem to have emboldened hate crime perpetrators in Baltimore and beyond.

“This is intersectional politics at its core,” says Alexander. “Ultimately, I think it’s all designed to make us scared, to keep us silent amid a time where fear is kind of the operating principle that is really trying to culturally suppress us from being able to be in public, to connect with each other, and to be who we are—and to animate our own embedded anxieties.”

At a June 18 community defense meeting held at Baltimore’s Red Emma’s, a worker-owned radical bookstore, fair trade coffeehouse, and community event space, residents discussed how to respond to this attack, highlighting that an increase in policing is not the answer, as police often target queer—especially Black queer and trans—communities.

Both Scotti and Alexander noted that it is difficult to trust the police in Baltimore, who have a long history of misconduct toward the queer community, which includes the police killing of Donnell Rochester, an eighteen-year-old gay Black man, in February, and multiple allegations of harassment and mistreatment of trans individuals.

“If [the police’s] mission is to protect and serve, like I’ve always heard my whole life, where is that? I don’t feel secure, just because there’s a police officer. In fact, I usually feel less secure because of it,” Alexander says.

Instead of relying on the Baltimore police, Alexander recommends turning to community defense and mutual aid, which is illustrated by the Abell community’s response to the attacks.

“This is a warning. Whether or not whoever did this is ever caught is almost beside the point,” she says. “This is a call for us to really focus on what is going to connect us and what is going to keep us safe, because I think that we’ve all learned in the last couple of years that we are our best resources. In some cases, we’re our only resources.”

Zane McNeill is the founder of the DEIJ organization, Roots DEI Consulting and Policy, and co-manager of the labor rights group Rights for Animal Rights Advocates (RARA). They are also a contributing writer with Sentient Media and Law@theMargins.

A voice for peace, social justice, and the common good! Since 1909, The Progressive magazine has aimed to amplify voices of dissent and voices under-represented in the mainstream, with a goal of championing grassroots progressive politics.  If you value what you get from The Progressive, please join us and make a tax-deductible donation today so we can continue producing a high-quality print magazine, daily web stories and columns, and other important work, including helping to train new generations of journalists!