Disparities between the aristocratic and working classes are not only a foundational part of English culture, but a cornerstone of narrative conflict in British dramas, particularly as working people have been historically defined by their professions rather than their personalities or aspirations. 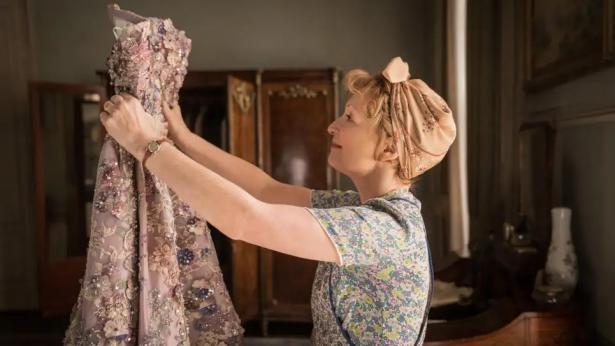 Disparities between the aristocratic and working classes are not only a foundational part of English culture, but a cornerstone of narrative conflict in British dramas, particularly as working people have been historically defined by their professions rather than their personalities or aspirations. Mrs. Harris Goes to Paris (the fourth adaptation from the novel by Paul Gallico, this time restoring the accented H to the title character’s printed name) is the latest in a long line of working-class dramedies where older individuals develop an interest outside of their working life that consequently changes either themselves or the world around them as a consequence. But despite that formula’s familiarity, it can still make for an entertaining story when executed properly—as director Anthony Fabian does when the namesake character takes her Gallic holiday.

Ada Harris (Lesley Manville) is a 1950s English housekeeper who spends her days commiserating with her best friend Vi (Ellen Thomas) while waiting for her MIA husband to finally return home from World War II. After receiving confirmation that Mr. Harris was killed in action, Mrs. Harris faces a personal crisis about her future as a widower—that is, until she discovers a magnificent Dior dress in one of her clients’ homes. Enamored by its beauty and desperate for just one nice thing to call her own, Mrs. Harris scrapes and saves to raise sufficient funds for a trip to Paris, where she intends to purchase her very own frock from the House of Dior.

When Mrs. Harris finally arrives in Paris, she learns from a group of wine-drunk miscreants that in France, “the worker is king.” Unfortunately, her experience at Dior indicates otherwise, when chief clerk Claudine Colbert (Isabelle Huppert) initially dismisses her interest. But when a sympathetic marquis (Lambert Wilson) and Dior’s accountant André (Lucas Bravo) discover that their working-class customer intends to pay in cash, they and one of the dress models (Alba Baptista) generously sponsor not only access to the designer’s catalogue but an extension to Mrs. Harris’ stay for a week of fittings, prompting a gorgeous montage that showcases the talents of Jenny Beavan, one of the best costume designers working today.

The film observes familiar rhythms of a typical class comedy, held together by Lesley Manville’s charmingly clueless performance, which carefully observes that misunderstandings of social custom are not the same thing as stupidity, regardless of how one’s supposed betters might think otherwise. As Mrs. Harris stumbles her way through the highs and lows of French couture, she becomes something of a folk hero to the workers assembling her dress, a symbol that they too might attain some level of finery. Isabelle Huppert makes for a fitting nemesis to Mrs. Harris, though not out of explicit malice. Instead, hers is a character defined by social conservatism and reticence to change, with Mrs. Harris’ soft and unassuming presence exposing that position’s great weaknesses.

This would be a fine, mildly entertaining narrative in its own right, but Mrs. Harris manages an extra layer of depth in its study of its title character. Although the film’s screenplay (attributed to four separate writers) does make an excessive point of emphasizing Mrs. Harris’ working-class invisibility and her desire to be truly seen, that layer of exploration affords the character a complexity that first glance doesn’t allow for—which is likely the entire point. Ham-fisted though it may be, it’s undoubtedly effective, and the gradual swell of sentiment leaves the film’s conclusion feeling saccharine without being condescending.

Mrs. Harris’ time in England—both at the beginning and end of the story—overstays its welcome for a scene or two too many, but the film’s pacing issues and sledgehammer-blunt dialogue do little to diminish its charms. Even without her, the film is an interesting story, mostly told well, but Lesley Manville is so effervescent and nuanced in her performance that she elevates the material through sheer force of will. In the tradition of Britain’s class comedies, what makes Mrs. Harris Goes To Paris comes down to the difference between, say, your average fashion designer and someone like Dior: with a pattern, anyone can make clothes—but in Manville’s hands, she stitches together something magical.