AIPAC Has Taken Over the Democratic Primary Process

What will it take for Democratic leadership to cry foul? It’s ultimately toxic for the party leadership to tacitly welcome a group currently endorsing a Republican who compared Democrats to Nazis. 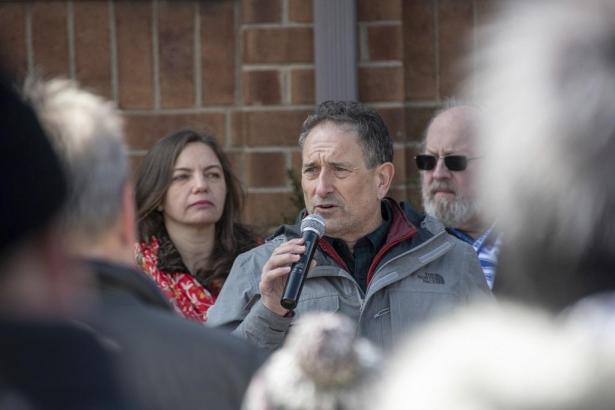 Primary season is ending with a bang this year in the Democratic Party, thanks to AIPAC, the single most consequential political action committee involved. The hawkish political group, through its super PAC United Democracy Project, is dumping trainloads of money to influence the outcome of two particularly high-profile races: boosting Haley Stevens over incumbent Andy Levin in Michigan’s incumbent-on-incumbent 11th Congressional District, and Glenn Ivey over Donna Edwards in Maryland’s open Fourth District.

On the surface, those campaigns break down along familiar ideological lines; Stevens and Ivey are the more conservative candidates, Levin and Edwards are progressives. But the Maryland race is especially notable for both the Democratic forces AIPAC is now opposing and for the stunning quantity of cash it has dedicated to the cause: Already, UDP has spent some $6 million boosting Ivey and opposing Edwards, by far the most money the super PAC has poured into any individual race in the cycle. And it’s not merely to knock off a Squad-type progressive: Edwards, who has already served a decade representing the same Fourth District as a Democrat, is a close ally of Democratic leadership and endorsee of everyone from Speaker Nancy Pelosi to Hillary Clinton.

That race, which will be decided on Tuesday, marks the continued advance of AIPAC into the Democratic electoral process, an unprecedented development that has, in just a few months, remade the reality of Democratic politics. In a number of races earlier this year, United Democracy Project put up millions of dollars to back more-conservative candidates, which proved remarkably successful. The $2 million-plus that UDP poured into North Carolina’s First District resulted in an easy victory for anti-choice candidate Don Davis; $2.1 million pushed conservative Valerie Foushee over the finish line in NC-04; $2 million almost certainly made the difference in Texas’s 28th, where conservative Henry Cuellar squeaked past Jessica Cisneros by fewer than 300 votes; $2.7 million on behalf of Steve Irwin nearly closed a 25-point polling gap in Pennsylvania’s 12th District, as he lost by the narrowest of margins to progressive Summer Lee. UDP-produced ads have been repeatedly criticized in multiple races for relying on misleading messaging, but the group has otherwise been met with little resistance or condemnation from leading Democrats.

With proof of big money’s power, particularly in low-turnout primaries, AIPAC has upped the ante. In Maryland’s Fourth, their $6 million outlay is by far the most they’ve spent by more than double, with Election Day still approaching. Already that money has shown up in polling. Edwards sported a 13-point lead over Ivey as recently as May; by July, Ivey was up by five points—an 18-point swing in less than two months.

But Edwards is not some progressive activist or outsider like Lee or up against an incumbent like Cisneros. On the contrary, Edwards is a mainstream Democrat and a close friend of House Democratic leadership, a group guided by and known for the enormous importance it puts on personal relationships. To that end, Pelosi recorded a video disavowing some of the misleading claims of the ads UDP has run attacking Edwards’s record.

However, Pelosi notably didn’t condemn AIPAC’s virtual takeover of the Democratic primary process, or condemn party candidates for accepting money from a group heavily funded by Republican donors, one that has simultaneously used its influence to endorse over 100 Republican candidates who refused to certify the 2020 election results. Similarly mum has been fellow Marylander Steny Hoyer, who is second-in-command in the House as majority leader, and has even endorsed Edwards in the past. Indeed, Hoyer, known to be a close ally of AIPAC, endorsed Edwards over the exact same Glenn Ivey in a tight House race a decade ago. But this time he’s remained silent as the group has poured millions of dollars into attacking Edwards. His office did not respond to a request for comment.

“Until leaders in the Democratic Party stand up and say this is unacceptable to take this money or any money like this, or until election laws are changed, the opportunity is there for a group like AIPAC to do this,” said Logan Bayroff, vice president of communications at J Street, the pro-Israel nonprofit group that advocates for diplomacy-based solutions. “We don’t know where it ends. I wouldn’t be surprised to find other Republican-aligned groups deciding to play in Democratic primaries going forward.”

AIPAC’s role in Democratic elections has changed drastically in just a handful of months. For many years, the group claimed to be a bipartisan entity, and didn’t officially endorse candidates. Until this election cycle, the group didn’t even have a super PAC; now, it’s on pace to spend nearly $20 million in the 2022 Democratic primary cycle alone, making it by far the most influential individual political group in Democratic electoral politics.

The group’s ability to influence the outcome of those Democratic races has drawn close attention from Republican mega-donors. In May, GOP billionaires Paul Singer and Bernie Marcus donated $1 million each to AIPAC’s super PAC. Marcus famously gave $7 million to President Trump’s campaign in 2016.

Crucially, AIPAC’s United Democracy Project super PAC has not been similarly active in Republican primaries, even in races where Republican candidates have been widely criticized for antisemitic comments. Representatives like Marjorie Taylor Greene, who infamously claimed that Jewish space lasers were behind California’s 2018 wildfires, has not faced any UDP-backed primary. “Have you seen them spend a dime in a Republican primary?” asked Bayroff. “What would a million dollars have done helping MTG’s primary challenger?”

AIPAC has, however, endorsed numerous Republicans in their general elections. Among that slate of endorsees are Elise Stefanik, Barry Loudermilk, and Scott Perry, who famously compared Democrats to Nazis.

The emergence of AIPAC as a Democratic kingmaker has led groups like J Street to become more active in electioneering as well. Prior to this election cycle, that group also did not have an independent-expenditure operation or a super PAC. Now, in an attempt to blunt the influence of AIPAC’s multimillion-dollar blitz, the group has committed to six-figure ad buys for a handful of Democratic politicians in UDP’s crosshairs. On Tuesday, the group announced a $700,000 ad buy on behalf of Michigan’s Andy Levin, which criticized his opponent Haley Stevens for her acceptance of AIPAC money. The group has also committed $660,000 to supporting Edwards.

Of course, those numbers pale in comparison to the money being put up by UDP, but it remains consequential. Progressive candidates who can patch together support from a number of groups, as Summer Lee did in Pennsylvania, have a chance of pulling out a victory even while getting massively outspent. But progressive groups are also being pulled in a number of different directions at the moment, and with donations flowing to urgently needed programs like abortion funds, it can be difficult to marshal enough resources to do battle with the near-infinite funding of deep-pocketed Republican billionaires.

For House Democratic leadership, the prospect of more “moderates” (if not crypto-Republicans) might be welcomed. They have long quarreled with progressives, and leapt at opportunities to blame the left flank for the party’s woes. Those impulses, compounded by Democrats’ inability to pass campaign finance reform as part of their doomed democracy reform package, have created a huge opportunity for Republicans to commandeer the party’s own democratic process, one that they are seizing more and more with each passing primary.

But it’s ultimately toxic for the party leadership to tacitly welcome a group currently endorsing a Republican who compared Democrats to Nazis. If Pelosi and company do nothing to combat right-wing entryism in their own party primary process, even as Republican funders target mainstream Democrats with close personal ties to the party’s elite, AIPAC will only be emboldened further. If Pelosi doesn’t speak up soon, she might be targeted herself.

Alexander Sammon is a staff writer at The American Prospect. His email is asammon@prospect.org.

The American Prospect is devoted to promoting informed discussion on public policy from a progressive perspective. In print and online, the Prospect brings a narrative, journalistic approach to complex issues, addressing the policy alternatives and the politics necessary to create good legislation. We help to dispel myths, challenge conventional wisdom, and expand the dialogue. Support the American Prospect Click here to support the Prospect's brand of independent impact journalism.