books The Great Stewardess Rebellion: How Women Launched a Workplace Revolution at 30,000 Feet

Many books describe organizing drives and some capture the transformative impact these campaigns can have on the participants. The empowerment that happens when a worker decides to engage in collective action, and this book documents that reality... 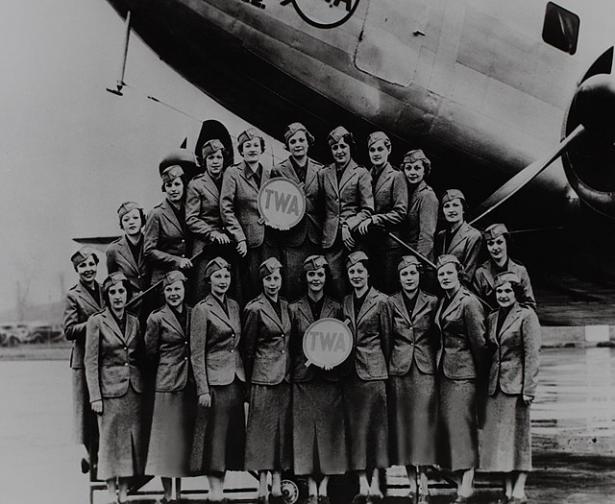 Patt Gibbs was the epitome of the slogan, “Well-behaved women seldom make history.” The first leader in the stewardesses’ revolution profiled in Nell McShane Wulfhart’s fascinating book, Gibbs was born to break the rules. One of her early enterprising innovations when she decided to start recruiting her workmates into the union, i.e., the Transport Workers Union, was to talk GM into letting her use a mobile home so she could drive it as a meeting space to the spots where the stewardesses lived. If they wouldn’t come to union meetings, she would come to them. The company bought her argument that the parade of young, attractive women going in and out of their unit was good advertising. Gibbs, who grew up driving farm and circus equipment, already knew how to drive the commercial vehicle.

If the word “revolution’ strikes you as too strong a description, the next time you’re on an airplane, look around. See that older woman making announcements? Or the one with the gold ring on her left hand; look at the attendant wearing glasses; or the one who is slightly overweight. Each of these unremarkable features is testimony to the hard fought, inch-by-inch victories waged by the women determined to change their job into a profession worth sticking to—whether married, pregnant, or aged out beyond the limits set by the industry—typically 32 to 35.

The Great Stewardess Rebellion: How Women Launched a Workplace Revolution at 30,000 Feet

There are many books that describe organizing drives and some that capture the transformative impact these campaigns can have on the participants. The empowerment that happens when a worker decides to engage in collective action, and this book documents that reality in intriguing detail. We learn about the motivations that acted as catalysts to action; the first steps; and the indignities and control over their lives that they pushed against. We come to know their individual stories and watch them as they take on vested interests, from the early Equal Employment Opportunity Commission, Congressional committees, their intransigent employers, and eventually, their union.

One of the excellent contributions made by the author is her elucidation of each term and process she describes as part of the reality of being part of the labor movement. The attachment of the public and knowledge about the world of trade unions and the labor movement has been shrinking rapidly over the decades. Many younger workers have no connection to this world. Each new term is explained in crisp, clear descriptions, and the reader is brought into how it all works.

Another valuable contribution is that we get to understand the legal cases that paved the road to change and the women—the plaintiffs—who had the courage to bring those cases. Typically, their names are attached to the case and we know nothing about the struggles behind these legal victories. We also come to appreciate the grit and determination it took to persist in challenging the rules imposed by the airlines on these women who shared the responsibility for safety among other technical parts of their job descriptions, but were portrayed—advertised—as just beautiful bits of mindless fluff in the sky. The indignities imposed on these workers are mind-boggling. How about the girdle pat? Any manager, or pilot, could conduct his own survey to see if the required garment was being worn; the constant weight-checks, in public, and a hundred other humiliations were all part of the normal workday of a stewardess.

Fortunately, the constant downgrading didn’t successfully undermine the resolve of the many women who led the charge to change their conditions. It is laughable to read about the language in job descriptions of the “nontechnical tasks” – the “distinctly womanly tasks” only they could perform in light of the gains that women were making in the wider world, thanks to the organizing taking place in the women’s movement. It is heartening to read about the support the women’s movement and its leaders offered to the stewardesses as they started their own journey to autonomy. Gloria Steinem was especially active in this work, lending her luminous presence and organizing savvy to their efforts. Other women leaders also took part, including Kathie Sarachild, a 2022 recipient of the Clara Lemlich Award.

The book tells two stories—how the union failed to represent the stewardesses and the outcome of that failure with the birth of independent unions – women-led unions. Patt Gibbs worked for American Airlines, while many of the other characters worked for other airlines. It became clear to some of the activist women that the union was successfully fighting for better conditions, including wages, pensions, and other benefits, for their male members, the mechanics and ground crews, but the concerns of the stewardesses were inconsequential and not worth fighting for, according to the male leadership of the union. It took two rejections of national contracts before the TWU negotiators got the message that the demand issued by the stewardesses—single rooms for lay-overs—like the single rooms that male stewards got; that pilots got; wasn’t “negotiable.” The union ultimately negotiated that right.

The path to independence is vividly described; how the campaigning took over the lives of the organizers and eventually succeeded in an exit from the TWU. The drive began with one airline, and spread throughout the industry. One part of this story that underscores the principle of solidarity that is supposed to undergird the labor movement is the cooperation forged between the female leaders of the new union, when both those opposed to the break-up and those who fought for it joined forces and worked together. There is even a heartwarming archival story, albeit one with an ultimately unfortunate ending.

As the author, a journalist, acknowledges, her work was built on the work of others who came before her, and first among them, Kathleen M. Barry, whose book, Femininity in Flight: A History of Flight Attendants (2007, Duke University Press), covers the same ground albeit from an historian’s perspective. While Barry provides more in-depth treatment on some topics, both books succeed in telling this thrilling story. The Great Stewardess Rebellion is an exciting read and provides a timely reminder of how far women have traveled from the days of “mad men” and advertisements that showcased slogans such as: “Fly Me. I’m Cheryl.”

The pioneering astronaut Mae Jemison advised that one should “never limit yourself because of others’ limited imaginations.” As the author documents, the women who created the Association of Flight Attendants, the Association of Professional Flight Attendants, and the earlier Stewardesses for Women’s Rights, contributed to the liberation of women well beyond those in their own ranks. “’Flight attendants’ civil rights strides extended beyond Title VII and the airline industry, as they prevailed in striking down arbitrary age restrictions for women in the workplace and began to change views about women’s roles at home and in our society.’ Their slew of court cases and EEOC complaints laid a solid groundwork for women in other industries to bring their own claims challenging sex discrimination.” (pp. 253—254)

[Reviewed by Jane LaTour, author of Sisters in the Brotherhoods: Working Women Organizing for Equality in New York City. LaTour, former editor of Work History News, is working to complete her second book, an oral history about rank-and-file reformers — activists in the cause of union democracy. ]

Thanks to the author for sending this review to Portside.