Is Georgia Where Democracy Lives—Or Dies?

A Georgia prosecutor may bring Donald Trump to account. At the same time, Georgia Republicans are trying to rig this year’s elections. 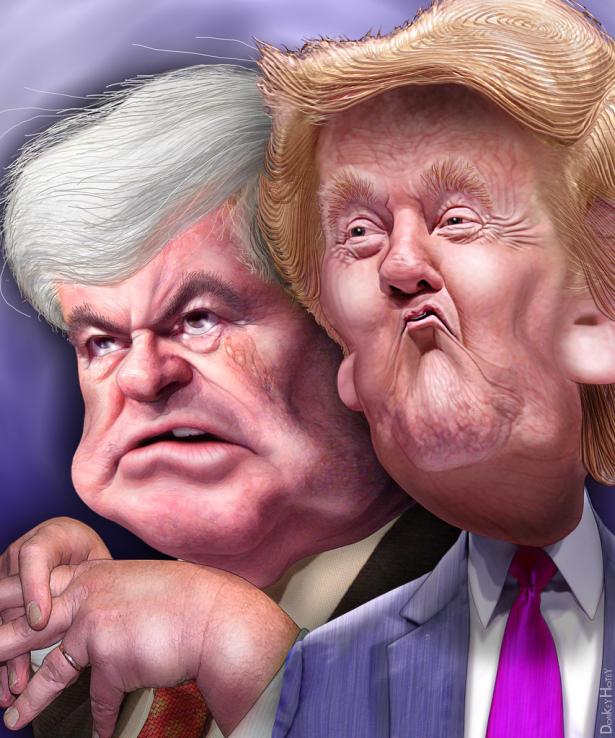 Newt Gingrich and Donald Trump, DonkeyHotey, licensed under CC BY 2.0

Georgia is on my mind. But unlike the Georgia of song, which floats in “peaceful dreams,” the real Georgia is home to an investigation that reminds us of the national nightmare.

First, many Americans have been watching in rapt horror as Donald Trump has so directly been implicated in efforts to overturn a presidential election he lost, including through “fake electors” that would give him electoral votes from states President Biden won. Second is what I’ll call the real Big Lie—of voter fraud, which Trump used to fuel his schemes to stay in power. Georgia is investigating possible election fraud by Trump, including the fake elector scheme there. But Georgia is also a state with a long history of making it hard for Black people to vote. Its governor and secretary of state may have refused to participate in Trump’s scheme, but too many elected officials in Georgia have participated in the real Big Lie, the one to undermine democracy.

As the January 6 committee continues its blistering presentation of evidence directly implicating Trump in a set of plots to block the peaceful transition of presidential power, Georgia reminds us of the earliest explosive evidence that we heard about Trump’s attempt to steal the election. We heard his voice on a recorded call with Georgia Secretary of State Brad Raffensperger, the state’s highest election official. Trump pressed him to “find 11,780 votes, which is one more than we have. Because we won the state.”

That news broke on January 4, 2021, two days before the horrific violence at our nation’s Capitol. As a lawyer, for me it smelled like the smoking gun that would prompt an investigation. Some time later, the Fulton County District Attorney’s Office empaneled a grand jury, swiftly approaching a possible subpoena for the former president to testify before it.

The drips of news from the grand jury may become a stream—or even a rushing river. Four Trump advisers received subpoenas to testify, including Senator Lindsey Graham, erstwhile U.S. attorney and Trump lawyer Rudy Giuliani, and Georgia Congressman Jody Hice. They are fighting the subpoenas, which is more tactical than legally meaningful.

The grand jury then subpoenaed Georgia political figures, sending “target” letters to the Georgia Republican Party chair and two state senators, one of whom, Burt Jones, is making a bid for lieutenant governor as incumbent Governor Brian Kemp’s running mate. Jones was reported to have been one of the Trump “fake electors,” along with Hice. Kemp, like Raffensperger, reportedly got a call from Trump to convene a special session to select “fake electors” and earned Trump’s wrath and retribution for refusing the request. Now we learn that all 17 “fake electors” are targets of the criminal probe. Trump loyalists have publicly admitted to the scheme. The Georgia Republicans all signed a sworn statement that they were “duly elected and qualified electors.” They were not.

Remember that these are two separate sets of election crimes. One set of crimes appears to include Trump conspiring with others and soliciting election fraud from Raffensperger to “find votes.” The other set includes Trump conspiring and soliciting Kemp and others to deploy “fake electors.” But will indictments in Georgia by a local prosecutor end the Big Lie of election fraud that has been the poison pill in our politics? They are important and should help, but we will need to do more.

Georgia is a reflection of our national nightmare—a battleground state that reflects the divisions, racial and political, in this nation. The reason that it was possible to recruit fake electors and consider swaying Kemp is that Georgia has always been a civil rights battleground state, and these investigations are revealing the new lows to which we have sunk, having allowed voter suppression to advance GOP political gains even before Trump’s 2020 bid.

As we watch the Fulton County grand jury’s work unfolding, we should also reflect on what we are seeing in Georgia’s current elections. After all, Trump’s Big Lie is also an old lie—one that state legislatures have been using to pass laws to make it harder for people to vote, particularly impacting people of color. Georgia was one of only nine states that had such a blatant history of discrimination against voters of color that the entire state was covered by the Voting Rights Act provision that required preapproval by the Department of Justice for any changes to voting laws or district lines. Those protections, part of the Voting Rights Act, were gutted by the Supreme Court in 2013 in Shelby County v. Holder. After that, Congress, for the first time since the act’s adoption in 1965, failed to produce bipartisan support to renew the protections. Today, Georgia has passed some of the most abusive voter-suppression laws we are witnessing, in a country where voter suppression is running unchecked now.

Remember that voter registration was the strategy that elected leaders like former state Representative Stacey Abrams and other community leaders actively followed because the Supreme Court’s bad decision in Shelby County left eligible Black, Latino, and Asian voters more vulnerable to discriminatory election laws and practices. Biden won Georgia by a mere 12,000 votes. This 0.2 percent margin was paper thin but a historic outcome. The historically blood-red state is now firmly purple because, since 2000, there are almost two million more eligible voters. About 70 percent of that increase is voters of color, and a whopping 48 percent of the growth is Black eligible voters, who constitute about a third of the Georgia electorate.

For some, these numbers are exactly why, in 2017, Georgia purged more than half a million voters from its voter rolls, or 8 percent of the electorate. Georgia is a battleground state, but the true battle is for civil rights, of which voting is a foundational one. Making it harder for citizens to vote in Georgia has long been premised on the unfounded myth of rampant voter fraud, especially notable in the passage of the state’s most recent and extreme law, which closes polling sites and denies water to voters standing in long lines.

The most dangerous provision of these new Georgia Big Lie–induced changes is to remove the final vote tallying from the secretary of state and hand the Republican-dominated state legislature the power to select who tallies that final vote. Think about that today. Raffensperger did the right thing in refusing to “find” votes. Republican legislators are targets in an investigation to swing an election from the winner of the state’s popular vote.

We don’t know if this type of law would have helped Trump steal the 2020 election if it had been in effect. We don’t know whether it will be misused moving forward. What we do know is that 17 members of a single party are targets in a vote-fraud investigation and that this new law confers additional power on any party to put in place a final vote counter who might be a lot less scrupulous than Raffensperger was.

We won’t see or hear all the evidence the grand jury is seeing unless there are indictments and a criminal trial. But we do know there is enough evidence of election fraud to start naming targets and considering Donald Trump. We need lawbreakers to be brought to justice, not only if they are powerful but especially if they are. It won’t solve all our problems, but it may help as an additional measure or proof that allowing an unfounded fear of voters and discrimination against people of color is corrosive to democracy. That will impact all of us if we don’t take action against bad laws and push for voting rights and to make the ballot box more accessible, not less.