A group including Native Hawaiians will now manage the mountain Maunakea, where Indigenous rights and astronomy have collided. 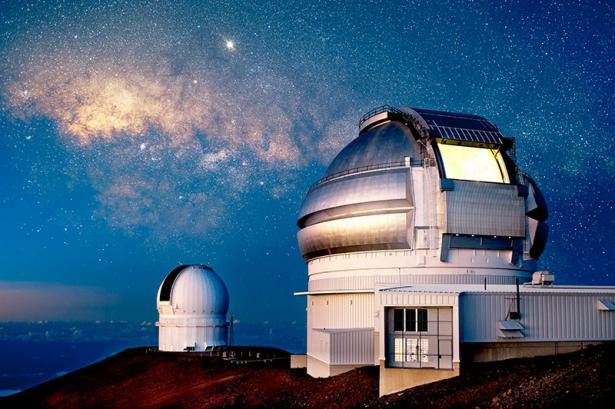 There are 13 observatories on Maunakea, including the Gemini North telescope (right) and the Canada-France-Hawaii telescope (left)., David Nunuk/Science Photo Library

The state of Hawaii has set up a new way to manage the mountain Maunakea, the summit of which is home to many world-class astronomical observatories. A law signed by Hawaii’s governor on 7 July removes the University of Hawaii from its role as the main authority overseeing the land on which the telescopes sit, and gives that responsibility to a newly established group with much broader representation of the community, including Native Hawaiians.

Many hope that the shift will mark a path forwards for astronomy in Hawaii, after a years-long impasse over the future of telescopes on Maunakea. Since 2015, some Native Hawaiians have intermittently blocked the road to the summit, primarily to prevent the start of construction of the Thirty Meter Telescope (TMT) — a next-generation observatory that will have a huge light-gathering mirror to make astronomical discoveries. The sit-ins sparked wide-ranging discussions about the rights of Indigenous peoples to have a say in managing lands that are sacred to them but that have been used for purposes including science.

The new Maunakea authority will include Native Hawaiians in decisions about how the mountain is managed, with an emphasis on mutual stewardship and protecting Maunakea for generations to come. The authority will have 11 voting members, one of whom must be an active practitioner of Native Hawaiian cultural traditions, and one of whom must be a descendant of a cultural practitioner who is associated with Maunakea. There are also spots for representatives drawn from astronomy, education, land management, politics and other fields.

“I’m very hopeful for the new entity,” says Noe Noe Wong-Wilson, a Native Hawaiian elder who has helped to lead road blocks on the mountain. “It is beyond my imagination of where we would be at this time, because we have fought so long to be heard.”

The University of Hawaii has managed most of the lands around the Maunakea summit since 1968, when the state granted it a 65-year lease to operate a scientific reserve focused on astronomy. Maunakea has ideal skies for astronomical observation, given its 4,200-metre height and its stable and dark night skies. The university now has to transfer all of its management duties, including a complex set of subleases, permits and other agreements, to the new authority by 1 July 2028. “There’s a tremendous amount of change that’s cued up and uncertainty associated with that,” says Doug Simons, director of the university’s Institute for Astronomy in Manoa, Hawaii.

Maunakea is used for a number of purposes, including tourism, hunting and environmental science, in addition to cultural practices and astronomy. It is currently home to 13 observatories, two of which are in the process of being decommissioned to help reduce the impact on the mountain.

Related: Astronomy impasse: What's next for the Thirty Meter Telescope?

The new law emerged from a proposal by Scott Saiki, speaker of the state House of Representatives, that aimed to break the impasse around Maunakea. It created a working group that recommended changes in Maunakea management and led to the final plan to remove the University of Hawaii as primary manager.

The group was successful because it established a framework of mutual respect, says Rich Matsuda, associate director of external relations at the W. M. Keck Observatory in Waimea, Hawaii, who served as a member. “Things have often been framed as culture versus science,” he says. “That’s kind of a false dichotomy and an offensive framing. Different knowledge systems and ways of looking at things don’t need to be in opposition to each other.”

The law says that astronomy is the policy of the state of Hawaii. “The state is saying that astronomy is important to Hawaii and that the state is invested in astronomy, but even more so invested in the stewardship of Maunakea as a special place — that combination is absolutely key to me,” says John O’Meara, chief scientist of Keck, which has two 10-metre telescopes atop Maunakea. “It’s reason to be optimistic.”

Many steps remain. The first is to identify individuals to make up the new Maunakea management authority — they are likely to be appointed by the governor — and then get it set up to take over all the administrative and management tasks that the university has been overseeing. The state legislature will also need to provide money to fund the group beyond the US$14 million allocated for its first year.

And then there is still the question of the TMT. It has a permit to proceed with construction but has not yet done so, given tensions on the mountain. Last November, the project got a much-needed boost when the US decadal survey of funding priorities in astronomy and astrophysics recommended that it move forwards. The US National Science Foundation (NSF) is now considering whether to provide funding for the project, which does not have enough money to completely build the telescope with its partners in the United States, China, Canada, India and Japan.

If the NSF decides to join the TMT, at an estimated cost of $800 million, at least one-quarter of the telescope’s time would be open to observers from around the United States. On 19 July, the agency announced that it would begin a federal review of how the telescope’s construction could affect Maunakea, which is the first step as the NSF considers whether to contribute funding.

Alexandra Witze is a contributing correspondent based in Boulder, Colorado. Among other exotic locales, her reporting has taken her to Maya ruins in the jungles of Guatemala, among rotting corpses at the University of Tennessee's legendary "Body Farm," and to a floating sea-ice camp at the North Pole. She has a bachelor's degree in geology from MIT and a graduate certification in science communication from the University of California, Santa Cruz. Among her honors are the Science-in-Society award from the National Association of Science Writers (shared with Tom Siegfried), and the American Geophysical Union's award for feature journalism. She coauthored the book Island on Fire, about the 18th-century eruption of the Icelandic volcano Laki.

Nature is the foremost international weekly scientific journal in the world and is the flagship journal for Nature Portfolio. It publishes the finest peer-reviewed research in all fields of science and technology on the basis of its originality, importance, interdisciplinary interest, timeliness, accessibility, elegance and surprising conclusions. Nature publishes landmark papers, award winning news, leading comment and expert opinion on important, topical scientific news and events that enable readers to share the latest discoveries in science and evolve the discussion amongst the global scientific community. Subscribe.