During the pandemic, many restaurants have re-examined the concept of tipping, which has been shown to create pay inequity and encourage racism and sexism. The solutions are complicated. 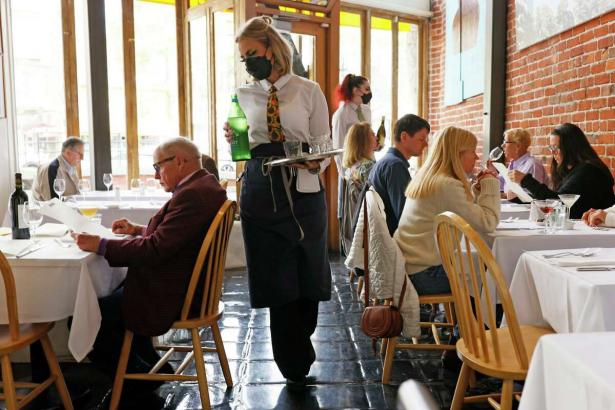 Many hands touch Zuni Cafe’s famous roast chicken before it arrives on a diner’s table: the prep cook who breaks down birds, the sous-chef who watches over them as they turn golden in the rustic wood-fired brick oven, the server who brings the grand plates to the dining room.

When the legendary San Francisco restaurant made headlines last year with its decision to replace tips with a 20% automatic “fair wage” surcharge, the

goal was to raise wages for the lowest-paid workers in the kitchen — an acknowledgment that every employee who helps make Zuni’s chicken deserves to earn enough to live in the Bay Area. While hailed by many as an optimistic shift in the industry, the move has sparked tensions within the restaurant.

Zuni servers, while supportive of the ethos driving the new model — balancing historic inequities between the kitchen and front-of-house staff — now say they’re struggling to make ends meet without taking home more in tips. Their frustration has reached the point of discussing a walkout or unionizing to put pressure on Zuni. Because of server pushback, the restaurant is discussing potential changes to the model, owner Gilbert Pilgram said. But returning to tips is “not on the table,” he said. “It’s in no restaurateur’s interest to have a system that keeps any of the parts of the restaurant unhappy,” Pilgram said. “That’s a recipe for disaster.”

The debate over tipping is not new in the industry. Making any changes to the typical system usually sparks controversy among servers, who fear lower pay, and customers, who may feel robbed of their perceived right to reward staff. Some Bay Area restaurants have proven it can be a long-lasting practice, such as Zazie in Cole Valley and Berkeley institution Chez Panisse. Meanwhile, other prominent businesses have ended their tipless experiments, such as Danny Meyer’s Union Square Hospitality Group in New York City.

The pandemic brought fresh urgency to the issue when it threw restaurants into an unprecedented staffing shortage. Many owners seized the opportunity to reinvent their compensation structures. Tipping, which has been shown to create pay inequity and encourage racism and sexism, was reexamined on a larger scale.

Given Zuni’s stature in the industry, many restaurateurs have been watching its progress closely amid what feels like a turning point for equity and change in restaurants. The friction serves as a reminder that it’s not so easy to accomplish.

“I do agree that the back-of-house deserves to get more money. We, servers, are suffering a lot of the brunt of it,” said server Kate Sachen. “A lot of us wish that it would just go back to the old system.”

Whether Zuni’s model has been successful depends on whom you ask. Thanks to the surcharge, hourly kitchen staff saw their pay go up by 35% to 58%. Turnover is low in the kitchen despite an ongoing labor shortage, said executive chef Nate Norris. Fewer cooks and dishwashers are working second jobs, he said.

Prep cook and dishwasher Carlos Garcia, who’s worked at Zuni since 1989 and prepares all the chickens, has directly benefited. The 63-year-old Mexico City native is finally able to start saving for his retirement.

“I’m getting old and I need to take care of myself,” Garcia said.

Norris, who serves as Zuni’s spokesperson, has been working hard to break down the entrenched belief that the kitchen and dining room are separate entities, and that tips should be distributed as such. But servers still “see that money as theirs,” he said, “and not just that they earned it, but they earned it exclusively.”

When Pride Weekend brought throngs of customers to Zuni in late June, server Richard Wade worked long shifts that took a toll on his body, he said. They didn’t end in the usual reward of cash tips in his pocket.

“Normally working that kind of a crowd, you’d be making a lot of money,” he said. “In this tipping system I just made the exact same amount as if I had sold $800 rather than $3,000.”

Sachen has relied on tips as part of her income for more than a decade at restaurants in San Francisco, San Luis Obispo and Minneapolis. She loves working at Zuni but is struggling with the pay. At $32 an hour, plus a side hustle as a voice coach, she said, it’s challenging to be able to afford to live in San Francisco — the exact problem the model was meant to fix for kitchen staff.

Wade, Sachen and other servers take issue especially with the way Zuni distributes tips charged to credit cards, of which 36% goes to the server and the rest to bartenders, bussers and back-of-house staff. Whether a server shares cash tips with other staff remains at their discretion. (Zuni also kept an optional gratuity line, meaning diners can choose to tip on top of the 20% surcharge.)

“It feels to me like a car salesman’s commission, and then the car salesman only gets 36% of the commission and the rest is going to the manufacturer,” Sachen said.

Most diners support the service charge, besides the occasional confusion or sticker shock, employees said. Some ask why Zuni doesn’t raise prices instead. Restaurateurs are often wary that increases will turn diners off, and the goal of the fair-wage surcharge is also to be explicit about where the money is going.

“I didn’t want to lump in with the cost of the salmon the cost of paying employees a good wage,” Pilgram said.

The restaurant is far from the first to attempt a tipless model. The discord inside Zuni isn’t unique, either. No-tip restaurants often encounter resistance from veteran servers, who are accustomed to earning more. That’s in part why San Francisco’s Bar Agricole reinstated tipping in 2016.

Zuni has retained fewer servers than cooks during the pandemic, although it’s hard to pinpoint whether that’s due to the surcharge or other factors like people leaving the industry or moving out of the area, Norris said. While nine out of 20 cooks who worked there before the pandemic remain, only three out of 23 servers stayed, according to Norris.

Though servers’ wages are lower, they now receive additional benefits like paid health insurance premiums and paid time off. Norris isn’t sure if Zuni’s model means fewer servers are applying to work there. The restaurant is fully staffed, Norris said, although the new servers tend to be less experienced than usual.

Zuni’s light-filled dining room, where plates of gleaming oysters and small mountains of shoestring fries have graced the tables since 1979, feels like a second home for many. Before Wade was a Zuni employee, he was a loyal customer for 40 years. Eating there, he said, has always felt special, inclusive and exceptional.

Wade wants to be part of what feels like an important “social experiment” at a landmark restaurant. But he feels conflicted.

“They’re asking for the servers to give and give and give the tips that they would have received,” he said, “but they’re not getting a whole lot in return.”