The FX comedy "Reservation Dogs" returns in an expansive mood.

My happy place, it turns out, is Wes Studi explaining string theory. "Every element of our bodies was made inside an exploding star," says Bucky, the cheerful layabout Studi plays on Reservation Dogs. "We just borrow stardust until we die, and then we return it for something else to use." He's talking about a cosmic connection binding everyone together, a song that plays eternally even when the notes change.

Season 2 of the FX sitcom has a lot of notes, and a lot of everyone. The show debuted last summer as a loopy crime caper, with a crew of teen petty larcenists staring down a rival gang of punky-cute badasses. Those Tarantino-youth-group affectations disappeared quick, revealing a multi-generational tale of loss and a cultural mood of impoverished/good-humored striving. Midway through the new season there's a big gathering, and I counted 12 or 13 characters I deeply care about: moms and uncles, friends and enemies, Zahn McClarnon as a gallant-goofus cop, plus the occasional visitor from one spirit realm or another.

Co-creator Sterlin Harjo is in an expansive mood. He directs the first two episodes, which arrive together Wednesday on FX on Hulu. (Or FX/Hulu. Or the Hulu formerly known as FX. Whatever. It's on Hulu.) The two-part premiere forms one hour-long tale, with a pair of missions that find tasks for the vast supporting cast and one shiny guest star. Willie Jack (Paulina Alexis) called down a curse on nemesis Jackie (Elva Guerra). Now she wants to reverse the bad medicine, which she thinks has brought nasty side effects onto her disintegrating friend group. Elora (Devery Jacobs) is gone, on the road with Jackie to California. Antics ensue, not all hysterical. A hitchhiking attempt turns bloody. Uncle Brownie (Gary Farmer) believes himself to be a holy man, which leads him to rip his vintage pin-up posters off the wall: "Holy men can't be havin' colonizer boobs on their wall!" Bear (D'Pharoah Woon-a-Tai) feels abandoned by Elora, and unsure of what to do now. The group's "secret hideout" is getting torn down, because a rich Texas Rancher wants to raze the abandoned building and build a megachurch. 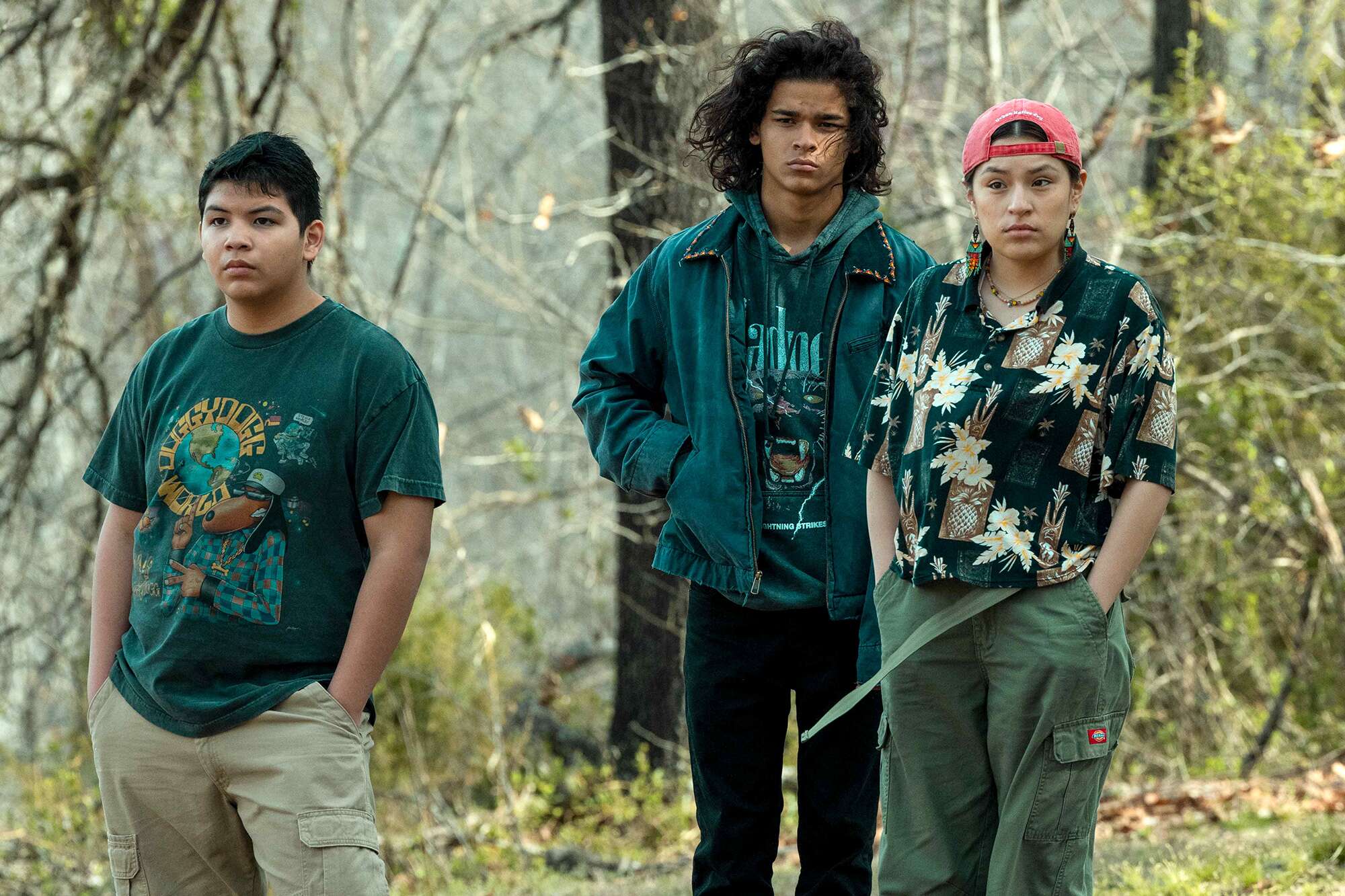 Reservation Dogs was co-created by Taika Waititi, beloved for one Thor movie until people saw his next Thor movie. You could initially pinpoint this show around his eccentric creative spectrum, with a genre-hopping blend of emotional sweetness and conversational surrealism. Season 1 kept digging deeper into the characters and the setting, though, finding a well of emotional resonance matched by a wonderfully specific sense of place. Low-key humanity dominates season 2. There's a whole extraordinary episode about Bear's first day on a roofing gig. He learns the ropes and gets hazed by the older guys. He also has to face some lingering daddy issues. (Doesn't everybody?) Harjo and his writing staff mint delightful comedy and grab-a-tissue pathos out of plots that can be straightforward, absurd, or existential. Another episode closely observes a community's rituals of farewell, as an old relative's impending demise brings out a couple lifetimes of bad memories.

Individual scenes feel loose, even improvised. If you think Studi talking string theory is fun, wait till you hear him and Farmer stumble through the lyrics to "Free Fallin'." But Reservation Dogs also lives up to its daunting status as, per the press notes, "a breakthrough in Indigenous representation on television." The anxiety of first-ing can weigh heavily on a creative mind. No surprise, maybe, that the teen leads struggle with their own anxieties around their ancestors' legacy. Bear keeps getting visited by a ghost (Dallas Goldtooth), who is sort of a parody of an "Indian Spirit Guide" but who also provides genuinely helpful advice about interpersonal communication. (Certainly, he must be the first spirit guide in Hollywood history to ever use the word "pedagogy," or to proudly claim that Crazy Horse menstruated.) There are characters striving to get off the literal reservation — and characters who worry that doing so would be an act of, like, cultural betrayal. Heavy stuff, with a light touch. Brownie seems to be cleansing his home of unclean white-man artifacts — and then he changes his mind, because he just can't send his VHS copy of Big Trouble in Little China to the trash can.

Here, in short, is a show everyone should see and most will love. I do have two minor concerns. First, the ensemble actually might be too big for a half-hour show with a 10-episode season. It's an embarrassment of riches problem, but the four young leads are all real discoveries, and these first four episodes don't give Willie Jack or Lane Factor's freakishly sincere Cheese nearly enough to do. (Happy to rescind this statement when and if they both get showcase episodes.) Second, Dogs has a tendency to cycle back through the same couple of core pilot concepts. Halfway through season 2, characters keep talking about going to California, and the tragic death of Daniel (Dalton Cramer) seems to come up whenever an episode needs a slow-down dramatic moment. (Mourning Daniel often seems to be Elora's sole character trait). Obviously, ambition and sorrow don't fade away. But both of those story strands lose power with repetition.

This is a rich, sweet, and sharp comedy, though, with a world-built visual texture that turns every room into a freeze-frame treasure. It never stops being funny that every single person knows Elora's name come from Willow. It never stops being oddly touching how vigilant Cheese is about pronouns. "Build things, boy," someone advises Bear. "Don't tear them down." Reservation Dogs is building something big. Grade: A-