Prey, the latest film in the Hollywood Predator series, breaks new ground in its authentic portrayal of Indigenous Americans, thanks to its Comanche producer and Sioux lead 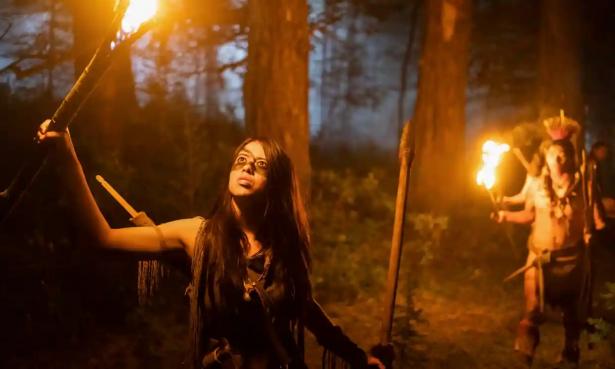 This lithe, primitivist reinvention takes place in 1719, when a band of Comanche find themselves becoming quarry for one of the intergalactic trophy-hunters who has turned up a few centuries too early to run into Arnold Schwarzenegger. Packed with authentic period detail (such as the Indigenous oral hygiene), it’s probably the first big-budget film about Native Americans since 1992’s Last of the Mohicans.

Representation is the kind of woke buzzword that would have had Arnie and his meathead brigade reaching for their grenade-launchers back in the 80s. And Prey doubles down by making its hero a woman. Amber Midthunder, a 25-year-old Assiniboine Sioux actor who plays lead character Naru, says that she has been selective in the past when it comes to Indigenous roles. “A different level of care goes into choosing them because often the representation is not the best, especially for people who get so little representation.” But, spaceships aside, she says Prey felt different. “For a period piece, it showed so much more cultural accuracy, instead of boiling us down to something one-dimensional, like that hyper-spiritual side or something overly violent.”

That this Hollywood-produced film doesn’t step into any cultural mantraps is down to its Comanche producer, Jhane Myers. She was hired by the director, Dan Trachtenberg, to ensure this frontier sci-fi remained grounded in Native American reality. With her CV – Comanche and Blackfoot advocate, traditional artist and craftsperson, and world-champion buckskin dancer – she reminded him of the film’s resourceful protagonist. “He said talking to me was like talking to the grownup Naru,” says Myers.

The kind of cultural consultancy work she had done before on the likes of The Lone Ranger and Wind River can be limited in scope, she says. “A director may have something written, and that’s just the way it’s going to be whether it’s true or not. You can voice that, but doesn’t always mean that’s going to happen.” Having full producer status on Prey was a major step up, she says. “If somebody’s a consultant, they’re not on there full-time – maybe they’re on the phone or whatever. But when you’re there in person and hands-on, it makes a big difference.”

Myers compiled a hefty manual of Comanche customs that Prey’s various production departments could make reference to: everything from the earth pigments used to make the tribe’s signature black, red and white colours, to how they cured meat. The plot device of a young woman who wants to break custom and become a warrior sounds like a modern concoction. But in fact, Myers points out, there are many precedents in Native American history, including Buffalo Calf Road Woman, who killed General Custer, according to some sources, and the Apache warrior Lozen. To match up to these illustrious predecessors, Midthunder, along with the rest of the cast, attended the Native American version of the now-traditional Hollywood bootcamp, learning archery, tomahawk and spear-fighting.

Working alongside Juanita Pahdopony, another Comanche educator, Myers’ influence helped reshape the script from the inside out. Naru was originally named Kee, which means “no” in the tribe’s language. But Myers felt she should be named for what she did; in this case, “fight”. She also objected to the practice of giving Indigenous characters generic names, such as Comanche No 1; even the most disposable of French trappers got to enjoy being called the likes of Rambert in the three seconds before they were eviscerated by the Predator. “So I assigned them names,” says Myers. “It gave the actors more spirit to get into their character. If I’m Native Woman No 1, I don’t know what that feels like. But if my name is Naru, and I have fight and I have that kind of spirit, I know what that’s like, right?”

You believe she does. Myers says she moved into producing in order to change “everything” about the way Hollywood depicted her people. From the earliest westerns, Native Americans have been, in her eyes, “romanticised by people that really didn’t know our culture”. When Indigenous people look for films in which they feel well-represented, there are only “bits and pieces” in the canon that do the job. A friend of hers says that Hollywood discovers Native Americans every 20 years; two rounds back saw perhaps the most prominent example, Kevin Costner’s Dances With Wolves. She concedes that film was respectfully done, but points out that the subtitled Lakota was often completely mistranslated. She still sees the same kind of corner-cutting. “A lot of times when you try to add Native content or correct things in a script, you come up against: ‘Oh, we don’t have the budget for that. Oh, it would be too hard.’ So I want to shift that paradigm.”

Midthunder believes that Native American opportunities on screen are slowly expanding. She compares the situation to that of her actor father, David Midthunder, who was offered only a series of what she calls “feathers and leathers” roles: trackers, hunters and scouts. (Billy, the laconic point man in the original Predator played by the part-Cherokee actor Sonny Landham, was in that vein.) “Only recently are we getting projects that have Native characters afforded things like personalities and relationships, and be seen in urban societies,” says Midthunder. She points to teen comedy Reservation Dogs – co-created by Seminole film-maker Sterlin Harjo with Taika Waititi – and her own role in X-Men spin-off Legion, where her mutant character’s Native heritage is mentioned but not defining. The 2021 indie drama Wild Indian – a kind of Indigenous American Psycho from Chippewa director Lyle Mitchell Corbine Jr – is another groundbreaking recent standard-bearer.

Before it was finalised, Myers screened Prey to the various departments of the Comanche nation. They loved it, but what they loved most of all was the fact that, for once, they were being screened an unfinished film – when they still had the chance to reshape it. One thing the studio wouldn’t budge on was putting the film out as standard in the Comanche dub (the language only features sporadically in the English version) – a shame when you consider the likes of Apocalypto have shown that that level of immersive authenticity can work for mainstream audiences.

But the most important thing, as its producer points out, is that it exists in the mainstream arena at all. “Because it’s sci-fi, it’s action, yet it has Native culture in it, there are young film-makers that will watch it and be excited to do something of their own. We’re barely scratching the surface of the Native content market. It’s untapped. Imagine if somebody does something totally off the hook just because they watched this.” Hopefully soon, camouflaged aliens will be the only kind of on-screen invisibility Native Americans have to contend with.

Prey is available on Disney+ on 5 August.

… we have a small favour to ask. Tens of millions have placed their trust in the Guardian’s fearless journalism since we started publishing 200 years ago, turning to us in moments of crisis, uncertainty, solidarity and hope. More than 1.5 million supporters, from 180 countries, now power us financially – keeping us open to all, and fiercely independent.