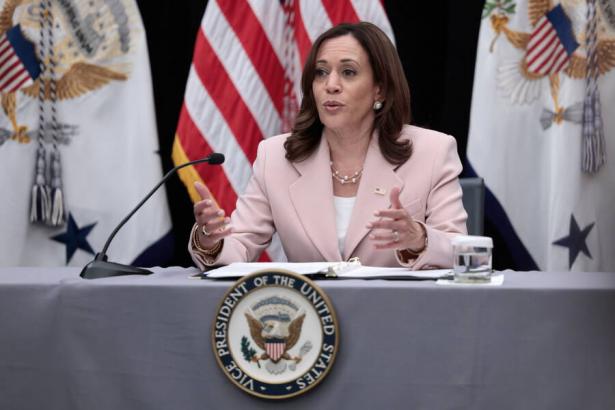 Vice President Kamala Harris gestures as she participates in a roundtable for her Call to Action initiative for northern Central America at the InterContinental Los Angeles on June 07, 2022 in Los Angeles, California.,Anna Moneymaker // In These Times

The irony apparently lost on the White House is that it is promoting the same economic model that has caused so many to be forced to leave their homes and migrate in the first place. The United States has long promoted corporate interests, which generate profits for U.S. companies and local elites, at the expense of the majority of the peoples of northern Central America, and this new ​“Call to Action” is no different.

One of the defining features of the economies of Honduras, Guatemala and El Salvador is the small group of extremely powerful families whose business empires control much of each country’s economy. Commonly referred to as ​“the oligarchy,” the power they exert over each country’s political and economic systems cannot be overstated. Many members of the oligarchy have amassed enormous riches precisely by impoverishing the majorities, whether it be by paying miserable wages on agricultural plantations, profiting from stolen Indigenous land, or exerting influence over political actors to win favorable state contracts.

One of the ​“corporate commitments” announced by Vice President Harris to supposedly address migration is that U.S.-based apparel company SanMar will purchase more from Elcatex, a Honduras-based garment manufacturer that it partially owns. The Collective of Honduran Women (CODEMUH), an organization of women who work in Honduras’ garment sweatshops, has long denounced the low wages, long hours and serious repetitive motion injuries they suffer in Honduras’ textile industry. The Inter-American Commission on Human Rights has admitted a petition filed by CODEMUH and the Law Group for Human Rights on behalf of 26 women who have suffered musculoskeletal disorders as a result of working in Honduras’ garment factories, including three Elcatex workers with alleged permanent partial disability. The petition alleges these workers face ​“excessive working hours, ill-suited workplaces and the imposition of a system in which remuneration is dependent on reaching an output target.” In 2019, Elcatex joined other garment factories in Honduras in opening a ​“Back and Shoulder School” to help prevent musculoskeletal disorders. These schools have faced criticism, however, as well as claims that workers are unable to put some of the recommendations, such as taking pauses, into practice during the workday.

The White House contends that SanMar’s commitment to purchase more from Elcatex will create 4,000 additional jobs and thus help stem migration. Ironically, Elcatex and many of Honduras’ garment factories are located in its northern industrial corridor, in an area of high migration. If the White House was serious about addressing the root causes of migration, it would recognize that low wages are one of the key drivers. The White House’s ​“Call to Action” should be for U.S. apparel companies to ensure living wages and labor rights, including changes to prevent workers from suffering permanent injuries.

Who will be the true beneficiary of SanMar’s increased purchasing from Elcatex? According to the White House announcement, U.S.-based SanMar itself is a part owner of Elcatex, so the profits from this increased purchasing will pad its own pockets. Elcatex is also owned by Jesus Canahuati, one of Central America’s biggest businessmen and part of one of the most powerful families in Honduras.

Another of the ​“private sector commitments” celebrated by Vice President Harris is that of Fundación Terra, the foundation of Grupo Terra. Grupo Terra is a huge conglomerate owned by Freddy Nasser, one of the most powerful men in Honduras.

Grupo Terra’s energy empire includes Hidro Xacbal, S.A., which owns the Xacbal Hydroelectric Project and the Xacbal Delta Hydroelectric Project in Quiche, Guatemala. These projects are located in Indigenous Maya Ixil territory, where the U.S.-trained and supported Guatemalan military carried out genocide during the early 1980s. As Dr. Giovanni Batz writes in NACLA, ​“The Ixils have historically resisted against invaders, from the Spanish to coffee finqueros to corporations building megaprojects.” In March 2015, Ixil communities of Nebaj whose crops were going to be affected by the construction of a 4 kilometer tunnel for Grupo Terra’s Xacbal Delta Hydroelectric Project protested and publicly rejected the project. Also in 2015, the Guatemalan security forces violently repressed Ixil people who were blocking the construction of the Xacbal Delta project.

In December 2020, Guatemala’s Special Prosecutor Against Impunity accused Edwin Alberto Hernandez Roque, General Manager of Hidro Xacbal, S.A., of bribery, allegedly benefiting Hidro Xacbal, S.A. with energy contracts, as part of a case alleging that a network of businessmen and former public officials used the Ministry of Energy and Mines to obtain illicit economic benefits. In 2021, Hernandez Roque agreed to collaborate with prosecutors in the case in exchange for the charges against him being dropped.

Another part of Grupo Terra’s fortune comes from selling energy to the state of Honduras. Honduras’ state electricity company, Empresa Nacional de Energía Eléctrica (ENEE), has operated at a huge deficit for years, which comes in part from paying overvalued prices for energy produced by private companies. Many lucrative energy contracts were awarded to the country’s oligarchy by the governments following the 2009 coup d’etat. According to an investigation by the Jesuit organization ERIC, the ENEE pays 70% of its annual budget to purchase energy from private companies, of which Grupo Terra is the biggest winner — with its companies receiving $327 million in 2019 for 11 energy contracts. ERIC further reports that the ENEE pays six times as much to private companies to generate electricity as it costs the ENEE itself to produce it. Solar projects are especially lucrative for private companies, with Honduras paying an exorbitantly higher price for solar energy than other countries in Central America.

The 2009 coup was followed by 12 years of plundering and corruption, and now Honduran President Xiomara Castro and a new Congress have pledged to combat corruption and restore state institutions. As part of this, Honduras recently passed a new energy law, which, among other elements, enables the government to renegotiate the contracts by which it purchases energy from private energy producers and set more reasonable rates. The U.S. ambassador to Honduras criticized the law on Twitter when it was introduced in the Honduran Congress, expressing worry about its effect on foreign investment. This raises concerns that the United States’ true motives are corporate profit.

Vice President Harris’ announcement also celebrated that telecommunications company Millicom, headquartered in Luxembourg, will invest $700 million ​“to expand and maintain its mobile and broadband networks.” While better internet is certainly a good thing, the idea that Millicom is doing this for any reason other than to increase its corporate profits is ridiculous.

Central America’s mobile and broadband market is highly concentrated; Millicom’s Tigo controls 53.1% in Guatemala and 62.5% in Honduras. Tigo Guatemala is Millicom’s most profitable company, with an astronomical operating profitability margin. The company reports significant potential for increased profit by expanding internet accessibility. Its Tigo Money service, a mobile wallet linked to one’s phone number, receives remittances that those who have migrated send to family members back home.

Investing to expand its business is certainly a good business move for Millicom, and with very little competition it is virtually guaranteed that this investment will result in significant profits. The profits, however, will largely go to its headquarters in Luxembourg and its shareholders on the Nasdaq stock market, not to Tigo’s clients in Central America. Thousands upon thousands of Tigo users will continue to migrate to the United States every year, enriching Millicom’s profits when they send remittances home via Tigo Money.

At a recent House Foreign Affairs Committee hearing, Rep. Ilhan Omar (D‑Minn.) expressed skepticism about the ​“Call to Action’s” corporate commitments. She referred to a recent delegation she participated in to Central America, explaining ​“what we heard was a lot of stories about transnational private investments being a root cause of migration…. about mega projects displacing communities, about labor exploitation.”

Instead of addressing the root causes of migration, the White House announcement is a celebration of international corporations and the Central American oligarchies intensifying their stranglehold on the economies of northern Central America. If the White House were serious about addressing the true root causes of migration it would have honestly contended with the bloody U.S. history of intervention in the region, including coup d’etats and the financing and backing of military regimes as they carried out widespread atrocities. The United States must finally break free of the ​“banana republic” mentality that sees the region as a source of natural resources and cheap labor and begin to respect the autonomy and self-determination of the peoples in the region.

At the very least, the White House’s ​“Call to Action” should call on the U.S. corporations that operate in the region to pay living wages and respect labor rights, to respect the land and territorial rights of Indigenous peoples, and to obey, rather than try to weaken, relevant national laws. The current ​“Call to Action” is the opposite: it provides corporations with free P.R. and helps companies that may profit from dispossession, labor abuses and corruption to whitewash their brands. It sums up U.S. priorities towards Central America quite well: The real interest is, and always has been, corporate profit.

[BRIGITTE GYNTHER is the Program and Research Coordinator at School of the Americas Watch. She has lived and worked in Central America for the past decade.

AZADEH SHAHSHAHANI is legal and advocacy director at Project South and past president of the National Lawyers Guild. She tweets @ashahshahani.]