Domestic workers make all other work possible – yet have been excluded from crucial federal labor protections for over 80 years. In a historic first, Congress held a hearing on policy that would finally change that. 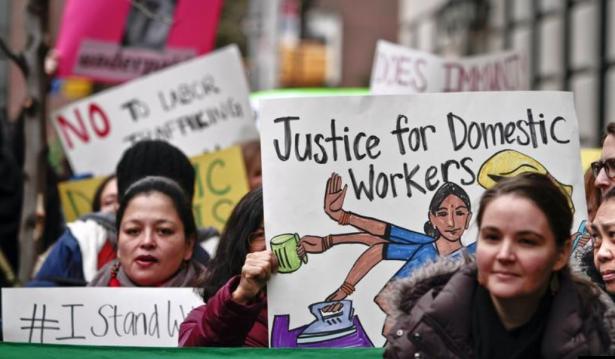 $71,610.03: the back wages, interest, and civil penalties paid to a live-in domestic worker by their negligent employer in Seattle. In July, King5 News reported, the city’s Office of Labor Standards orchestrated the employer’s settlement – redress for their failure to pay minimum wage, provide overtime pay, and track payment.

“I would encourage other domestic workers to come forward and not to be afraid if they believe that the contracts and the form of payment are not being fulfilled according to the work that is done,” the anonymous domestic worker shared in the wake of her repayment.

In 2018, exactly three years prior, Seattle was the first city in the nation to pass a Domestic Workers Bill of Rights. The ordinance instated a host of protections for domestic workers (defined as both employees and independent contractors, “who provide paid services to an individual or household in a private home as a nanny, house cleaner, home care worker, gardener, cook, and/or household manager”): entitlement to Seattle’s minimum wage, fair breaks during the workday, and written agreements outlining their employment.

Seattle also created a Domestic Workers Standards Board – composed of employees, employers, and community representatives – with investigatory and recommendation power through the city’s Office of Labor Standards. Because of the bill, that $71,610.03 ended up in the right hands.

Throughout the last decade, Domestic Bill of Rights legislation has proliferated in capitals and city halls – 10 states (mostly governed by Democrats) and 2 municipalities (Seattle and Philadelphia) boast these more robust worker protections. And they’ve paid off: a 2021 National Domestic Workers Alliance survey revealed that workers in states with Bill of Rights protections “report overall working conditions that are better than those reported by workers who live in states without a Bill of Rights.” 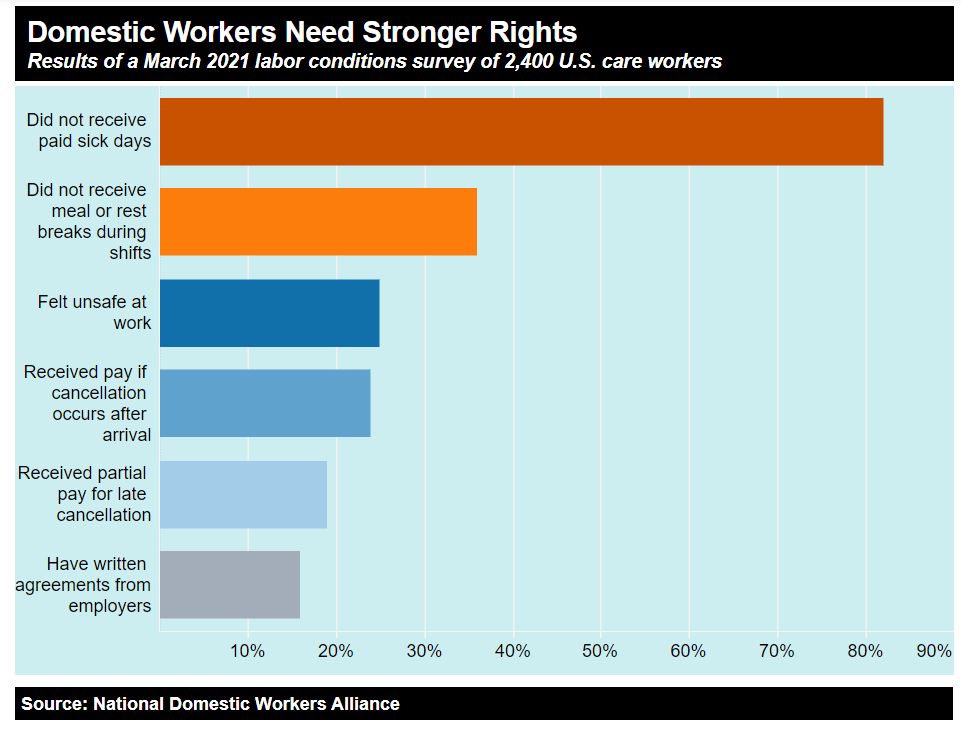 The numbers speak for themselves: domestic workers deserve sweeping protections beyond uneven state-level policies. As such, legislators recently revitalized their push for a National Domestic Workers Bill of Rights. Originally introduced in 2019 by then-Senator Kamala Harris (D-CA) and Kirsten Gillibrand (D-NY) along with Representative Jayapal (D-WA) in the House, Gillibrand and Jayapal reintroduced the bill with Senator Ben Ray Lujan (D-NM) in 2021 as Democrats lead across government.

On July 28th, 2022, the House Education and Labor Committee held a historic hearing on the legislation: “Essential but Undervalued: Examining Workplace Protections for Domestic Workers.”

The event, said National Domestic Workers Alliance Executive Director Jenn Stowe, was the “culmination of years of organizing and fighting for domestic workers and women of color across the country, for the last 15 years.”

The National Domestic Workers’ Bill of Rights consists of three key components: including domestic workers in commonplace labor rights and protections, from which they’ve been long excluded; codifying new workplace rights and benefits, specific to domestic work; and bolstering capacity to enforce and implement the new law.

In other words, a Bill of Rights would not just rightfully classify care work as valued work, worthy of protection – it would recognize caregivers’ distinctive policy needs across state borders.

Through the legislation, domestic workers would gain access to paid overtime and sick days. They could expect a fair, safe standard of working conditions, or recourse for poor ones. They could expect written agreements and fair scheduling to guarantee and stabilize their access to work. And the Department of Labor, along with a newly commissioned national Standards Board – composed in part by domestic workers themselves – would provide oversight and avenues for public accountability.

Bill of Rights-favoring panelists at the hearing included National Domestic Workers Alliance’s president, Ai-jen Poo, along with C. Nicole Mason of the Institute for Women’s Policy Research (IWPR) and a member of Seattle’s Domestic Workers Standards Board, Dana Barnett.

A former employer of domestic labor, Barnett advocates for Bill of Rights legislation “to recognize the clear stake that I have in creating a fair and dignified system of care.” Fair workplace standards and wages, Barnett argued before Congress, “helped establish fair and reasonable employment relationships” by eliminating ambiguity. “Just bringing recognition to employers that home is a workplace helps create a better one.”

Domestic workers have borne “a long history of exclusion from foundational labor laws, rooted in the legacy of slavery in America,” testified Ai-jen Poo. “This workplace is hidden, isolated behind closed doors and in private homes.”

While hammering out the details of the New Deal’s signature inequality-alleviating legislation, the 1938 Fair Labor Standards Act, Southern lawmakers fought for the exclusion of workers in the domestic and agricultural sectors – overwhelmingly people of color. These labor reforms, and others throughout the mid-20th century, directly catalyzed America’s lowest rates of inequality – yet persistently left millions of working Americans out in the cold.

In a rapidly aging nation, the demand for care work is skyrocketing, and cannot be “automated or outsourced,” said Poo in Congress. Higher workplace standards and protections, she argued, will bolster quality of care and “help secure and also attract a strong workforce for the future.”

This Bill of Rights could be a similar kind of forward-looking liberty document for millions of American women of color as our first, supposedly universal version. “We see it as a statement of our collective values as Americans, a statement on how we respect all working people, regardless of whether they work in an office or in a home,” wrote Harris, Jayapal, and Poo in a 2018 op-ed for CNN.

Of course, the Bill of Rights is one way to invest in care. In the New York Times, Poo explained how workforce support is just one element of solving our caring crisis: the country should “holistically” invest in care at a scale akin to infrastructure. We need to raise workers’ wages and strengthen their protections – while also investing in Medicaid home and community-based services, child care subsidies, affordable healthcare, retirement benefits, and paid leave.

This legislative session, it’s unlikely that Bill of Rights-style protections and pursuant budget appropriations will make their way to President Biden’s desk – investments in care were all too absent from this summer’s Inflation Reduction Act, and Republican Committee members spent the hearing fear mongering about inflation, debt, religious descrimination, and how the legislation might undermine the ability to “make employees part of the family.”

But state by state, the tide is turning. Bills of Rights are up for passage in New Jersey and Washington, DC. And Seattle is going further with its commitment to domestic workers, allocating a quarter of a million dollars for outreach to inform workers of their rights – facilitating justice as delivered by the settlement this summer.

“Firstly, it was my ignorance of the laws and rights that I had,” said the domestic worker in Seattle. “But through friends who supported me to do it, I lost my fear and filed the complaint. It was worth the risk and a favorable result was given.”

[Bella DeVaan is the Research and Editorial Assistant for Inequality.org. You can follow her on Twitter @bdevaan.]

Inequality.org is a project of the Institute for Policy Studies