If they auto-enroll everyone in their newly generous income-driven repayment plan, it will significantly take the sting out of resuming payments. Joe Biden’s plan is the culmination of years of activist work. 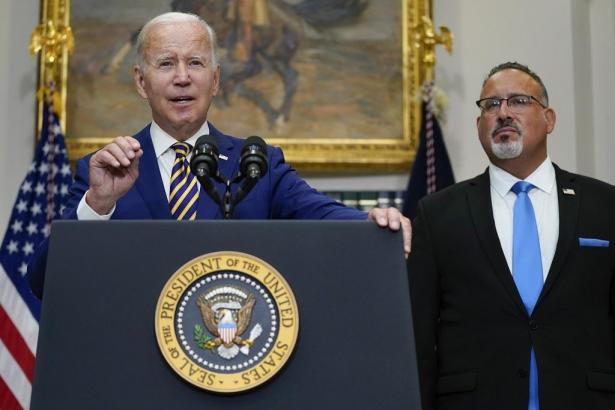 Joe Biden’s plan to cancel some student debt for everyone and extinguish the full balance for nearly half of all federal borrowers is the culmination of years of activist work. When we published our explainer that the president could cancel federally held student debt in 2019, many policy wonks tried to throw up reasons why it couldn’t happen. They lost the battle inside the White House, thankfully.

But the White House still has a political problem. Federal student debt payments have been suspended since the beginning of the pandemic, and in its announcement the administration said that pause would be extended one final time until the end of the year. That means that in January 2023, 23 million borrowers will start having to make a payment that has been on hold since March 2020.

Relatedly, to make those payments and avoid default or wage garnishment, they’re going to have to reduce their discretionary spending elsewhere. That means that while the government is getting student loan payments again, restaurants and department stores and other goods and services will probably see slower sales. For an economy already moving into slow growth or even a recession, thanks to the diligent work of the Federal Reserve, that’s a serious economic problem that will also resonate politically.

Whenever you restarted student loan payments, this problem was going to emerge. It was unavoidable. What is the way for the Biden administration to find a path out of this cul-de-sac and manage the transition with the least amount of harm? How can it give the remaining student borrowers a way to feel like they’re being treated fairly? How can it minimize the impact on the economy? How can it solve the future of education finance?

One plausible answer lies in one of the other announcements the administration made on Wednesday.

The Biden administration has significantly improved the income-driven repayment (IDR) program, which bases monthly payments on a borrower’s earnings. What was a decent system before is now a real model for ensuring that college students give back to the loan program what they got out of it. The next step for the White House is to figure out how to automatically enroll every student borrower in this payment program.

Previously, the IDR system limited monthly payments to 10 percent of a borrower’s income for 20 years. Now, the limit will be 5 percent, cutting the payment in half, though only for undergraduate debt. Plus, there are exemptions for “nondiscretionary” income: Under the new rules, if a borrower makes up to 225 percent of the federal poverty level—currently around $30,000 per year, or $15 per hour for a full-time job—they won’t pay anything at all, and these provisions apply to graduate school debt too.

The improved income-driven repayment program is obviously a huge advance and has the makings of a logical system for higher-education finance.

As long as borrowers make this payment, their balance will not go up because of accrued interest. And after 20 years in this program, the remaining amount due will be forgiven. If the initial loan balance was $12,000 or less, that time frame goes down to ten years, and the White House believes this will mean that just about all community college borrowers will be debt-free in ten years. It is estimated that these changes would save $1,400 a year for a single borrower making $38,000 annually, and $2,800 a year for a married borrower with a salary of $77,000.

This is obviously a huge advance and has the makings of a logical system for higher-education finance. For those who take out loans and enroll in IDR, the burden would be substantially reduced and in line with the wage premium that college provides them. If they have a successful career, they will pay more; if college didn’t work out for them, they will pay less, or nothing. It would all be in line with income, and time-limited to no more than 20 years, so stories of senior citizens still paying off student loans would mostly not exist.

The main problem here is take-up. According to the Education Department’s year-end report, as of June 2021 only 32 percent of student loan borrowers are enrolled in IDR. Moreover, as Matt Bruenig points out, individuals with higher loan balances use IDR in higher numbers than those with lower balances. This makes sense, because it’s a better deal if your balance is higher. But the exemption in particular for nondiscretionary income now makes IDR a good deal for everyone.

The next step is to auto-enroll everyone in IDR. If this were the only path for borrowers to pay back federal loans, it would make the cost of those loans somewhat irrelevant. For most people who borrow more than $12,000, they would make this 5 or 10 percent payment relative to their annual income for 20 years and be done.

The only issue would be informing the government of changes to their income status, but there’s help on the way there. The FUTURE Act, which passed Congress in 2019, will allow borrowers next year to give the approval for the Education Department to work with the IRS to pull their income information automatically. No recertification process would be needed, meaning the 5 percent threshold would be kept up with a person’s income. This is a small but critical change; previously, borrowers had to recertify their income every year, and it likely led to a lot of people dropping out of the program.

This policy could help get everyone auto-enrolled into IDR. If on the application form for taking out a student loan, the borrower could check a box allowing for the IRS and the Education Department to talk to one another, then IDR enrollment could be handled on the back end.

If people restarting payments next January knew that they wouldn’t have to pay more than 5 percent of their income and could get it forgiven in a certain time period, they would at least get that peace of mind in exchange for having to pay again. It would blunt some of the political downsides of resuming repayments. To the extent that those monthly payments are lower for people who get enrolled in IDR, it would reduce the economic impact of restarting payments as well.

The downside of this is similar to the government subsidization of higher ed more generally. If student loan payments aren’t as much of a burden, then colleges and universities could feel free to raise the cost as much as they want. Essentially, this would become a transfer from the government treasury to higher education administrators.

That’s where the White House and Congress can get involved. As my colleague Ryan Cooper explained, future rulemaking could require institutions to lower the cost of college as a condition for obtaining student loans. In fact, Congress would have some incentive to get those costs down, if the government is even more on the hook for them.

The Biden administration could add to that pressure, in fact. It could say that it will continue to cancel student debt as long as Congress doesn’t take control of the runaway education finance system. This is a way that executive action can spur action at the legislative level; Congress doesn’t want to get cut out of the deal.

The improved IDR system offers an opportunity to rationalize higher-education finance. It just needs to be made available to everyone.

[David Dayen is the Prospect’s executive editor. His work has appeared in The Intercept, The New Republic, HuffPost, The Washington Post, the Los Angeles Times, and more. His most recent book is ‘Monopolized: Life in the Age of Corporate Power.’’]