Responding to our investigation of a Boston suburb that prohibits hiring outside candidates for police chief, two senators and a prosecutor said such rules may make it harder for women and people of color to attain leadership positions. 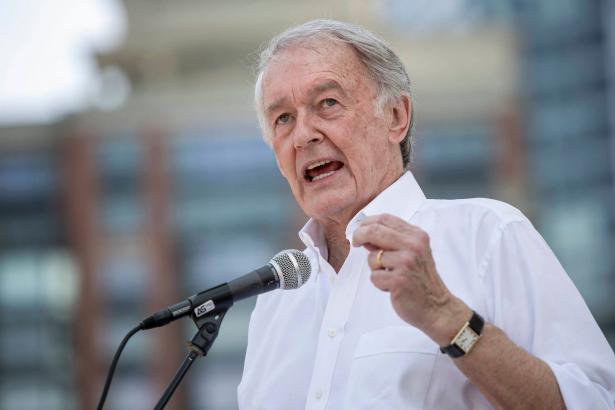 Massachusetts Sen. Ed Markey urged cities and states to end “policies that have only made it more difficult for women and people of color to take on leadership roles.”,Robin Lubbock/WBUR

This story was produced in partnership with WBUR. WBUR’s investigations team is uncovering stories of abuse, fraud and wrongdoing across Boston, Massachusetts and New England. Get their latest reports in your inbox.

Both U.S. senators from Massachusetts criticized local bans on hiring outsiders as police chiefs, while the top federal law enforcement official in the state said that the restrictions may violate civil rights law.

U.S. Attorney Rachael Rollins said that requiring police chiefs to be hired from within their departments is “problematic” and “ridiculous.” Such rules may limit the diversity of the candidate pool, she said.

Sen. Ed Markey, D-Mass., urged state and local officials to “address these pressing civil rights concerns” and lift “harmful policies that have only made it more difficult for women and people of color to take on leadership roles.”

Sen. Elizabeth Warren, D-Mass., said that “excluding outside candidates from consideration for key public positions is not a good idea.” An ordinance in the Boston suburb of Revere “should be reexamined to ensure all qualified candidates, internal and external, get a fair shot in an inclusive hiring process,” she said.

Rollins, Markey and Warren were reacting to a recent WBUR and ProPublica investigation of the police chief in Revere and the circumstances that led to his selection. Revere and another suburb, Waltham, have had ordinances for more than two decades that ban hiring an outside candidate as chief.

Revere’s ordinance prevented Mayor Brian Arrigo from looking outside for candidates to clean up what he called the police department’s “toxic culture.” In 2020 he promoted David Callahan, who as a lieutenant had been accused of bullying and sexually harassing a patrolman and creating “an atmosphere of fear” in the department. Neither Callahan nor the other three candidates for the chief’s job — all white men — had scored in the top two ranges, “excellent” and “very good,” on a test measuring attributes such as decisiveness and leadership. The Revere chief oversees more than 100 officers and civilian employees.

Also in response to the WBUR/ProPublica investigation, Revere City Councilor Dan Rizzo this week proposed a public examination of the allegations against Callahan and what the mayor knew about them. The council voted to speak with the mayor in private.

Rollins said an ordinance like Revere’s may violate the Civil Rights Act of 1964, which gives the U.S. Department of Justice the authority to initiate investigations into “practices that have the effect of discrimination on the basis of race, color, or national origin.” For example, the no-outsiders law could constitute discrimination if there were no officers of color inside the department who had sufficient rank or experience to be eligible for chief, or if the ordinance prevented a qualified external candidate of color from applying.

While declining to speak specifically about Revere, Rollins said, “If there were an ordinance that somebody told me directly precluded a city or a town from hiring qualified members of law enforcement that have language capacity, that are representative of certain communities, I’d want to work as hard as I could to remove that hurdle.”

Rollins recently led an investigation into patterns of police misconduct in another Massachusetts city, Springfield, where officers in the narcotics bureau failed to report instances of excessive force. Under a consent decree announced in April, the Springfield police agreed to improve internal investigations, as well as policies to prevent excessive use of force.

With police departments facing demands for reform nationwide, some experts say that one way to address problems such as racial discrimination, poor training or use of excessive force is to bring in an outsider. But Revere’s mayor, Arrigo, didn’t have that option. In 2017, he tried to change the ordinance so he could look at external candidates, but he was rebuffed by the city council.

“We absolutely welcome the help of [U.S. Attorney] Rachael Rollins to make these changes going forward,” Arrigo said in a statement to WBUR. “I have been and always will be in support of this change and am willing to work with anyone able to provide help and guidance. The work of improving a toxic police department culture cannot be done alone.”

It’s not known exactly how many cities and towns around the country are constrained to choose police chiefs who already work in the department. In New Jersey, state law requires most municipalities to choose a chief from the ranks. The city of Bakersfield, California, will hold a ballot referendum this November on whether to remove its insiders-only requirement. Bakersfield agreed to the referendum as part of a settlement with the California state Department of Justice, which had been investigating alleged civil rights abuses by city police officers. In 2020, after a sweeping overtime pay scam that implicated more than 45 troopers, the Massachusetts legislature dropped a requirement that the head of the state police be hired from within.

Police unions and local elected officials often support these insider-only ordinances to reward veterans of the force for their service and to keep political allies close. Brandon Buskey, head of the American Civil Liberties Union’s Criminal Law Reform Project in New York, said that these requirements should be abolished because they limit cities from finding the most qualified candidates for chief, but that unions are standing in the way.

“That’s a problem that really is national in scale because we see police unions and the lobbying effort of police groups being used to really thwart necessary reforms in so many jurisdictions,” he said.

Historically, in Revere, police unions have opposed eliminating the insider-only rule. Callahan had served almost three decades on the force when Arrigo chose him in July 2020. As a lieutenant, he had been recognized by the FBI for “exceptional assistance” in a public corruption investigation.

In 2017, a patrolman, Marc Birritteri, accused Callahan of repeated sexual harassment and “torment,” including calling him a “rapist” in front of fellow employees. The city found that Birritteri’s complaints were substantiated. Arrigo agreed that the city would pay the patrolman $65,000 and went along with Birritteri’s request for a special type of retirement for officers injured on duty, which could ultimately cost the city at least $750,000. Birritteri, who has been on paid leave for more than a year, promised not to disparage the city, the mayor or the police department.

Callahan has disputed Birritteri’s allegations. During an interview with WBUR and ProPublica on Aug. 4, he admitted that while he was a lieutenant he texted an image depicting the Virgin Mary superimposed on a vagina to a patrolman. He called it “a mistake” and said it would “never happen again.” He has also acknowledged that he didn’t properly investigate allegations that another senior officer had sex in multiple areas of the police station while on duty. Callahan declined to comment for this article.Arrigo has never disciplined Callahan, who has a five-year contract as chief at an annual salary of $192,000.

The mayor told WBUR in May that he would give the chief an “A” for his job performance. He said Callahan has stood up to the department’s culture as if he were an outsider.

Rizzo, the city councilor, criticized those comments, saying Arrigo is “complimenting a chief that’s got numerous allegations against him, none of which have been investigated and all of which he’s aware of. … It’s despicable.”

But Rizzo, who served as the city’s mayor until he lost his reelection bid to Arrigo, doesn’t want to change the ordinance. Opening the job to outsiders would be “basically saying, ‘Look, we have such a horrible police department that we can’t find one person that could be chief,’” he said. “I think that’s a slap in the face, quite honestly, to the men and women of the department.”

Arrigo said Rizzo had four years as mayor “to tackle the toxic culture at the Revere Police Department, but chose instead to ignore it.”

During Monday’s city council meeting, Rizzo introduced a motion calling for the mayor to publicly “appear before the City Council to discuss his knowledge of prior and/or current allegations of misconduct against the current Chief of Police and what actions and/or financial settlements have been made on behalf of the city as a result of these allegations.” Rizzo said he wanted an accounting and explanation of financial settlements with officers made since 2017.

However, other councilors were reluctant to publicly discuss the police department’s problems. The council unanimously voted to compel Arrigo to provide documents and meet with them, but only in a private, executive session. Rizzo said he supported the compromise because it was the only way to hold the mayor accountable.

Buskey, of the ACLU, said he’s concerned by the council’s decision to keep the information behind closed doors. At a minimum, he said, Revere should appoint an independent counsel and investigator to look into the police misconduct. He added that Suffolk County District Attorney Kevin Hayden or state Attorney General Maura Healey should investigate Revere’s hiring and disciplinary practices. Both declined to comment.Revere is a “very, very troubling situation,” Buskey said. It’s a “poster child for the need for independent oversight and control of the police function.”