It Matters That Joe Biden Used the F-Word

The president made waves when he referred to the Trump-drunk GOP as “semi-fascist.” Republicans have earned it—and more. 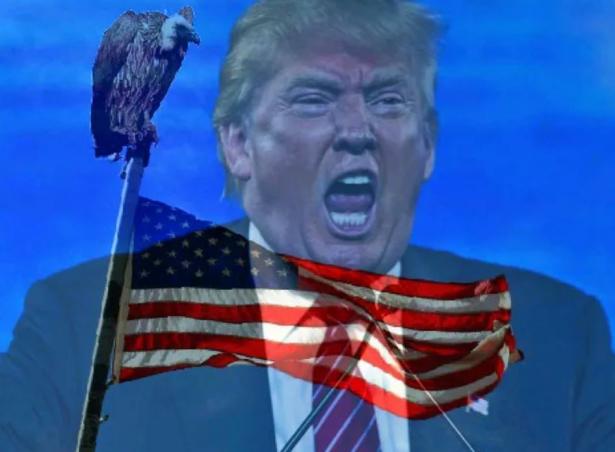 President Joe Biden has caused a minor stir over the past few days after he described former President Donald Trump’s political movement as “semi-fascism.” Though plenty of people have described Trump and Trumpism in similar terms over the past six years, whether pejoratively or analytically, it was the first time that Biden or someone of his stature has done so.

“The MAGA Republicans don’t just threaten our personal rights and economic security,” Biden told supporters at a speech in Rockville, Maryland, on August 25. “They’re a threat to our very democracy. They refuse to accept the will of the people. They embrace—embrace—political violence. They don’t believe in democracy.” He went on to say that the issue was “not just Trump, it’s the entire philosophy that underpins the—I’m going to say something—it’s like semi-fascism.”

Biden’s use of the appellation drew some predictable outrage from the right, though not as much as you might expect for one of the most damning claims that can be made about someone in Western political discourse. “[To] effectively call half of America semi-fascist, because he’s trying to stir up controversy, he’s trying to stir up this anti-Republican sentiment right before the election, it’s just—it’s horribly inappropriate,” New Hampshire Governor Chris Sununu, a Republican, claimed on Sunday while appearing on CNN’s State of the Union. “It’s insulting. And people should be insulted by it. And he should apologize.”

Apologize for what? Not only was Biden correct, but it would be hard to find a Democratic leader more sympathetic to the Republican Party than Joe Biden. His presidential candidacy was premised, in part, on the idea that he alone could bind the nation’s partisan wounds. He pledged bipartisanship, praised Senate Minority Leader Mitch McConnell, and reminisced about his time working alongside segregationists in the Senate. Those on the right who would deny the label should probably reflect on why Biden reached for it in the first place.

Historians and political scientists have drained oceans of ink while trying to define which political figures and movements were fascist. In many academic cases, the term is used extremely narrowly. There are unambiguous examples like Benito Mussolini’s Italy—which literally had a governing body named the Grand Council of Fascism—and Adolf Hitler’s Germany. And then there are those dictators that historians see as straddling the line between fascism and conservative authoritarianism, including Spain’s Francisco Franco, Portugal’s Antonio Salazar, and other Europeans who rose to power between the world wars.

I do not hope to provide a comprehensive scheme for discerning fascists from nonfascists. Fascism, after all, is not merely a political program. In more modern language, fascism is also a vibe. It is ultranationalistic in nature, with adherents fantasizing about the return to a national idyll that supposedly existed in the hazy recent past. Responsibility for deviations from that ideal are usually attributed to ethnic, religious, and sexual minority groups. Upon them are heaped the blame for the nation’s supposed moral, cultural, political, and economic decay.

Trump, for his part, inaugurated his presidential campaign in 2015 by describing Mexican immigrants as rapists and vowing to build a wall to keep them out. He insisted that a Chicago-born federal judge could not fairly oversee a lawsuit against him because the judge’s parents were born in Mexico. He began his presidency by trying to fulfill a campaign pledge for a “total and complete shutdown” of Muslim immigration into the United States. He told four Democratic women lawmakers of color that they should “go back and help fix the totally broken and crime infested places from which they came.” His administration repeatedly sought to deny civil rights protections to LGBTQ Americans.

If bigotry were the only salient feature of fascism, of course, then it would be a superfluous term. Historical fascists also argue that the problems they identify cannot be solved through the usual political means. Fascists typically regard their country’s democratic mechanisms as insufficient to the crises and enemies that they perceive around them. They view parliamentary government as part of the national decline and therefore regard it as an obstacle to be overcome rather than as a legitimate means to exercise power. That power should instead be wielded by a great leader, someone in whom the state can invest all of its authority to responsibly guide the national rebirth.

Trump does not believe in American democracy or support its continued existence. He routinely describes American elections as illegitimate and corrupt when he loses or thinks he is about to lose them. When Mitt Romney lost in 2012, he tweeted, “Lets fight like hell and stop this great and disgusting injustice! The world is laughing at us.” In 2016, he pledged to jail his opponent, Hillary Clinton, and led “Lock her up” chants at rallies. When he lost his reelection bid in 2020, he orchestrated a two-month campaign to overturn the results by pressuring local officials and mounting bogus legal challenges. Those efforts culminated in January 6, 2021, when he incited a mob to attack Congress and disrupt the counting of electoral votes in a bid to stay in power illegally.

There are disturbing echoes of January 6 in the histories of fascist movements. The seminal moment in Mussolini’s was his march on Rome in 1922, which was orchestrated as an insurrection but instead ultimately led the Italian regime to peacefully name Mussolini as prime minister. Other fascist movements tried similar measures with less success: Adolf Hitler’s failed Beer Hall Putsch the following year was consciously modeled on Mussolini’s seizure of power, while the Irish government cracked down on the Blueshirts’ attempt to march on Dublin in 1936. Those incidents reflected, among other things, fascism’s willingness not only to legitimize political violence as a means to an end but also to glorify its use.

I have written over and over again about Trump and Trumpism’s embrace of political violence, so I will not repeat myself ad nauseam here. But suffice it to say that it has always been at the core of Trump’s political ideology. I think often about a series of tweets he fired off on one election night. “This election is a total sham and a travesty. We are not a democracy!” he wrote in one tweet. “We can’t let this happen. We should march on Washington and stop this travesty. Our nation is totally divided!” he claimed in another. Trump even called for a “revolution” to stop the perceived injustice that he saw unfolding before his eyes: Mitt Romney’s loss to Barack Obama in the 2012 presidential election.

Biden’s use of “semi-fascism” to describe Trumpism is apt on two levels. For one, it avoids the nitpicking and incongruities that come with comparing one political movement to another across time and space. Like fascist and other semi-fascist leaders before him, Trump claims to be a champion of the working class while also fiercely opposing labor unions and what passes for socialism in the American political landscape. But Trumpism does not have the irredentist fantasies that formed the molten core of German and Italian fascism. Trump himself also lacks the coherence and vision to articulate a genuine policy agenda; his administration was often no different than it would have been under a President McCain or a President Romney.

Second, and perhaps more importantly, describing Trumpism as “semi-fascism” fits within Biden’s career-long desire to work across the aisle with relatively moderate conservatives. Contra Sununu, he was careful not to describe all Republicans as semi-fascists, just the “MAGA Republicans” who loyally carry out Trump’s agenda. That would not extend to Mitt Romney or Liz Cheney or other perceived apostates from the Trumpist faith. Nor would it apply to the Republican governors of otherwise blue states like Larry Hogan in Maryland and Charlie Baker in Massachusetts. If Sununu does not like the label “semi-fascist,” he should reflect on why an accurate description of his party’s leader makes him so uncomfortable.

[Matt Ford is a staff writer at The New Republic. Matt Ford @fordm ]