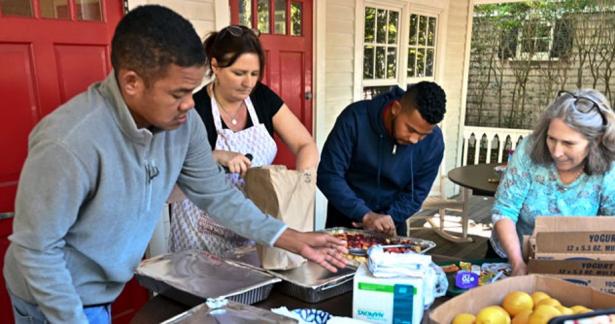 Markey and Reps. Jake Auchincloss, Bill Keating, Jim McGovern, Seth Moulton, Ayanna Pressley, and Lori Trahan sent a letter to the department's Office of Inspector General (OIG) given the governor's use of the Coronavirus State and Local Fiscal Recovery Fund (SLFRF) "to cruelly relocate vulnerable immigrants from Florida to other states across the country."

The lawmakers suggested the state's "inhumane program" violates federal law and urged the OIG to not only investigate but also "take all necessary action—including potentially rescinding any misused funds—to stop this abuse of coronavirus relief programs."

Reportedly lured in by the false promise of jobs, one migrant from Peru and 49 from Venezuela—including children—were flown to the Massachusetts island community on Wednesday. While residents welcomed them and rushed to provide food, clothing, and shelter, DeSantis has faced intense criticism for what the lawmakers and others have denounced as a "political stunt."

To pull it off, the lawmakers' letter explains, "DeSantis tapped a $12 million program that the Florida Legislature created earlier this year to allow the Florida Department of Transportation (FDOT) to 'facilitate the transport of unauthorized aliens out of Florida.'"

The letter highlights that "the $12 million was funded through 'the interest earnings associated with the federal Coronavirus State and Local Fiscal Recovery Fund,' effectively using Covid-19 relief to score political points by exploiting vulnerable immigrants."

This conflicts with Congress' intent for the SLFRF, which was established with the American Rescue Plan Act, the letter argues:

As explained in the Treasury Department's final rule implementing the Fund, the SLFRF was intended to "fight the pandemic and support families and businesses struggling with its public health and economic impacts; maintain vital public services, even amid declines in revenue resulting from the crisis; and build a strong, resilient, and equitable recovery by making investments that support long-term growth and opportunity." That rule further identified a limited set of uses for SLFRF funds, including replacement of lost public sector revenue, responding to the far-reaching public health and economic impact of the pandemic, providing premium pay for essential workers, and investing in water, sewer, and broadband infrastructure.

While the rule was designed to provide flexibility to state and local governments, Congress neither intended to allow, or authorized, state governments to use the SLFRF funds for immigration enforcement. Nothing in the American Rescue Plan Act or Treasury's final rule appears to allow states to use SLFRF funds to remove or relocate immigrants. Florida therefore appears to be illegally using taxpayer money for theatrics intended to criminalize and stigmatize immigrants in search of a better life in the United States.

The seven Massachusetts Democrats aren't the only high-profile figures calling for a probe.

DeSantis' Democratic challenger for governor, Charlie Crist, and California Gov. Gavin Newsom, also a Democrat, have both openly supported involvement by the U.S. Department of Justice, with the latter suggesting in a letter to Attorney General Merrick Garland that the Florida Republican's actions could qualify for kidnapping charges.

"These vulnerable migrants were reportedly misled about where they were headed—told they would be headed to Boston, misled about what they would be provided when they arrived, promised shelter, refuge, benefits, and more," Jean-Pierre said. "These are the kinds of tactics we see from smugglers in places like Mexico and Guatemala. And for what? A photo-op."

Axios reported that flight records indicate the planes chartered by DeSantis flew from San Antonio, Texas to Florida's panhandle before landing in Massachusetts. After spending two nights at a Martha's Vineyard church, the migrants on Friday were offered temporary housing on Joint Base Cape Cod.

"We are grateful to the providers, volunteers, and local officials that stepped up on Martha's Vineyard over the past few days to provide immediate services to these individuals," said Massachusetts Gov. Charlie Baker, a Republican. "Our administration has been working across state government to develop a plan to ensure these individuals will have access to the services they need going forward, and Joint Base Cape Cod is well-equipped to serve these needs."

Meanwhile, in Florida, faith and immigrant leaders came together Friday to call out DeSantis.

"Why does this feel so wrong?" Florida Immigrant Coalition (FLIC) spokesperson Stephanie Wall asked of the governor's stunt just weeks away from his election. "Because it is wrong. Gov. DeSantis, this is anti-family, anti-freedom, anti-faith, and anti-opportunity."

HOPE CommUnity Center founder Sister Ann Kendrick said that "I think Jesus would be crying" and thanked the "good, hard-working people of Martha's Vineyard… for stepping up and helping those immigrants who were lied to."