Thanks to grassroots organizing, which much of the media is ignoring, minor leaguers will now join the Major League Players Association. 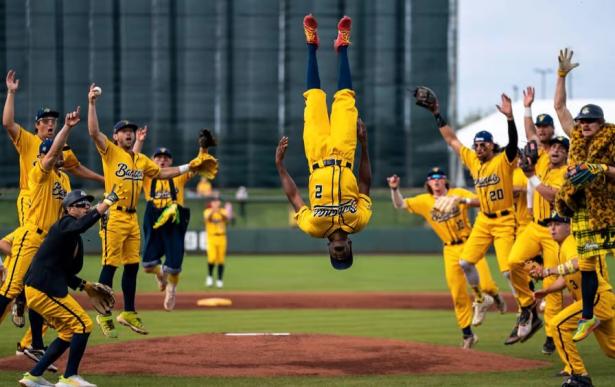 The Savannah Bananas cheer on the field before their Minor League Baseball away game against the Kansas City Monarchs on May 6, 2022. ,(Kent Nishimura / Los Angeles Times via Getty Images)

This overwhelming union vote—which will not be challenged by the Major League Baseball owners nor brought to the NLRB—comes after several other victories in the past year that have increased the confidence of minor league players to push for representation. Only this year(!) did Major League Baseball agree to provide housing for these players, who had been left on their own trying to figure out how to live and find shelter. Also, the league was finally forced in August to settle an eight-year-old federal lawsuit brought by the minor leaguers that alleged widespread violations of minimum wage laws. The settlement of $185 million—after lawyer fees—will be dispersed among 23,000 players.

And now we have a union. To understand how this came to pass, one must first disregard the headline from the Associated Press, which reads, “Minor leaguers form union, 17 days after organizing began.” This fight has been going on a great deal longer than just 17 days, spurred by minor league players agitating and organizing against conditions that would be unacceptable in any other occupation. This has included posting pictures on social media of team meals that look like Oliver Twist meets the Fyre Festival.

Bill Fletcher Jr., a Nation editorial board member and the outgoing chairperson of the board of the Advocates for Minor Leaguers, told me, “This is the result of work going back years which changed the climate of the country when it came to its perceptions of Minor League baseball players.… Ultimately, the MLBPA stepped up to the plate—no pun intended—and undertook the organizing. But the prior work laid the foundations and systematically isolated [Major League Baseball], demonstrating time and again that owner greed undermines the sport of baseball. I am so very proud of those who have tirelessly worked on this project, people who join with others across the USA raising up the struggle around economic and social justice and, ultimately, unionization!”

Simon Rosenblum-Larson, a recently released minor leaguer and cofounder of More Than Baseball, agrees with Fletcher. He told me, for a piece in The Progressive, “When I was drafted in 2018, players rarely talked about the poor working conditions, much less a union. Since that time, players have organized. We have built on-the-ground networks of solidarity, and ballplayers have spoken out, saying enough is enough to the poverty-level wages, the exploitative contract structure, and the hundreds of hours of unpaid work they’re forced into.”

Even Tony Clark, executive director of the MLB Players Association, acknowledged that this was not a case of the MLBPA swooping down from on high to organize passive laborers but has been the result of grassroots organizing. Clark said, “This historic achievement required the right group of players at the right moment to succeed. Minor leaguers have courageously seized that moment, and we look forward to improving their terms and conditions of employment through the process of good faith collective bargaining.”

The unionization of minor leaguers hasn’t happened in a vacuum. Labor in this country is, to recall the words of Fannie Lou Hamer, sick and tired of being sick and tired. As economic and social inequality have worsened during the Biden administration, these players are a part of a broader restiveness.

I reached out to one of the great labor historians in the United States, Peter Rachleff, for some perspective about what we were seeing. He told me, “The seemingly sudden unionization of 5,000 minor league baseball players is best understood as part and parcel of the impressive upsurge of organizing by workers who are securing the pandemic’s place as a compelling chapter in American labor history. In the 1930s, African American migrants from the South joined with the children of southern and eastern European immigrants to create industrial unions across basic industry. In the late 1960s and early 1970s, the civil rights and women’s movements led working women and men in the formerly non-union public sector to discover the power and pleasure of collective organization. And now, in the past two and a half years, movements for racial justice and the protection of workers’ safety have inspired a new generation of workers to undertake organization from Starbucks coffee shops, retail bookstores, and museums to Amazon warehouses, Silicon Valley, and congressional staffs. Minor league baseball players, long underpaid, abused, and disrespected, are making their path into the labor movement and into the history books—and into a more stable and secure livelihood.”

Rachleff nails it. We have seen Starbucks and Amazon, two of the most ubiquitous brands in this country, challenged by labor drives and the fight for union power. We just saw threats of a national rail workers strike, which led with bare-bones demands like “no disciplinary action for missing work because of medical emergencies.” Now we can add Minor League Baseball players to this revolt of mistreated, precarious laborers who have found success through solidarity and organizing. Being a minor league athlete is an exhausting existence of long bus rides and Styrofoam containers. It’s also a job where you can be dismissed at a moment’s notice and have to rebuild your life. Now, these unheard people will finally have a voice.