First and foremost, we must remember that our real power lies in our workplaces and in the streets. 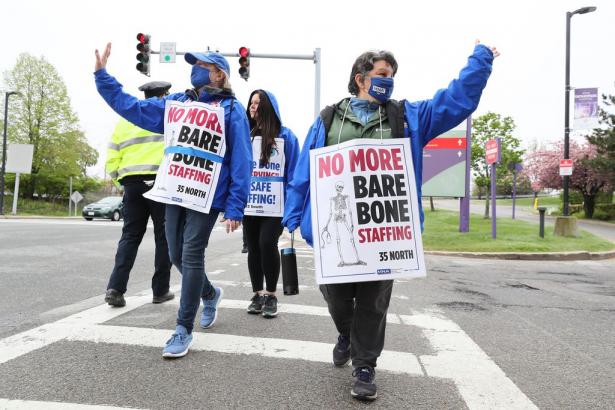 The situation working people find ourselves in as we approach the midterm elections — a cost-of-living crisis, broken labor law, and assaults on our rights and liberties — requires decisive action from our government. However, we are prevented from exercising democratic control over our society and economy by a corrupt two-party system that is fueled by corporate cash, and enabled by divisions among working people and increasing cynicism about democracy itself.

The corporate assault on the working class over the past four decades has taken its toll not only on our living standards, but also on our democracy. The big-business agenda of destroying unions, privatizing the public sector, and ending government regulation of rapacious corporate behavior has reduced the role of democratic debate and decision-making in our society. Instead, our economy, our government, and increasingly our social lives are now dominated by corporations — thoroughly undemocratic institutions which are dedicated solely to profiting off of our labor and every aspect of our lives.

This has coincided with the wholesale takeover of both major political parties by corporate forces. Both parties are now filled with career politicians who pay more attention to wealthy donors than to their constituents, use gerrymandering for partisan advantage, and refuse to address the basic economic issues facing working people.

In the 1980s and 90s, the Democratic Leadership Council led by Bill Clinton and Al Gore moved the Democratic Party away from its base in labor, working-class communities and communities of color into an embrace of free trade, media and technology capital, and the prison-industrial complex, as demonstrated by the Clinton administration’s signature “accomplishments”: NAFTA, welfare reform, the 1996 Telecommunications Bill and the 1994 Crime Bill. This trend only intensified during the Obama administration.

Meanwhile the Republican Party, always more friendly to the wealthy and corporations than to workers and unions, has ruthlessly eliminated what vestiges of pro-worker sentiment used to exist within the party and, when in power, has weakened government regulations which protect working people, passed legislation to undermine unions, and given massive amounts of public wealth away to corporations and the rich through tax cuts.

Not surprisingly, working people’s trust in political institutions — both government and parties — has steadily collapsed.

The 2016 presidential election, which initially looked like it would be a coronation of Hillary Clinton, was instead dominated by two political outsiders who shook up the political establishment by attracting votes from working people — Donald Trump and Bernie Sanders. Trump, of course, won the Republican primary handily, while in the Democratic Party the entire weight of the party establishment was successfully thrown against Bernie.

Following his surprise victory, the Republican Party establishment made its peace with Trump, and he delivered on two key parts of their pro-corporate, anti-worker agenda: tax giveaways to corporations and the wealthy, and appointing right-wing judges to the Supreme Court who would undermine any government attempts to regulate corporate behavior. Indeed, Trump’s culture-war divisiveness has proved a disappointingly effective means of covering up the Republican’s extreme (and unpopular) pro-corporate economic agenda, winning votes from working people who are being materially harmed by Republican policies.

The Democratic Party establishment, on the other hand, has proved itself willing to go to any length to defeat Bernie and the wave of progressive political leaders who were energized by his 2016 campaign and have used the Democratic ballot line to win office and advance pro-worker policies. In May of this year, millions of dollars poured into southwest Pennsylvania in an ultimately failed bid to prevent Summer Lee, a strong UE ally, from winning the Democratic nomination for Congress — even though her opponent was a union-busting lawyer. In many other races, however, corporate money and the intervention of powerful establishment Democrats were successful in defeating pro-worker candidates. In a particularly appalling example, top Congressional Democrats Nancy Pelosi and James Clyburn pulled out all the stops to prevent Texas Congressman Henry Cuellar, one of the most anti-worker Democrats in Congress, from being unseated by progressive challenger Jennifer Cisneros.

Where does this leave working people? What actions must we take to defend our interests?

First and foremost, we must remember that our real power lies in our workplaces and in the streets. Withholding our labor, picketing, marching and, when necessary, engaging in civil disobedience, have always been essential to any progress made by working people. We must also, as UE policy states, do the long and difficult work of building “our own political party for the workers, by the workers.”

While direct action and forming our own political party are the only long-term solutions for working people, we cannot ignore electoral politics in the short term, including the federal, state and local elections taking place this November. While we are fighting on unfavorable terrain, we cannot abandon the field, or give up on the hope that united, collective action by working people can improve our living and working conditions. To do so would be to abandon our country to an unrestrained corporate dictatorship that will squeeze every penny it can from our labor, while subjecting our private lives to intrusive government regulation.

We must recognize that the Republican Party is moving further and further down the path of extremism and blatant contempt for democracy. Virtually all sectors of the party continue to embrace the “big lie” that the 2020 election was somehow “stolen,” and the worst elements of the party are making a conscious effort to grab control of state electoral mechanisms, running extremist candidates for positions like secretary of state to which few voters pay attention but which could have enormous consequences for the future of democracy.

The Republican playbook for imposing their agenda is clear: suppressing the participation of working people and communities of color in elections, legislating themselves into permanent dominance through gerrymandering, stacking the courts with right-wing ideologues — and doing their best to wipe out the labor movement through anti-worker laws and court decisions. If they are allowed to succeed, working people will have virtually no recourse for improving our conditions.

As distasteful as it is to vote for corporate Democrats, in many if not most races they are the only viable candidates opposing extremist Republicans. Two states with significant numbers of UE members, Pennsylvania and Wisconsin, provide a good example. In each of them, a strong pro-labor Democrat is running for U.S. Senate and deserves the support of UE members. Yet it will also be important for working people to keep the governor’s office (and in Wisconsin, the state supreme court) out of the hands of reactionary Republicans who are willing to trample on the democratic process in their zeal to enact a corporate agenda, even if the Democrats in those races are, at best, lukewarm supporters of labor.

In effect, democracy itself is on the ballot in November, and working people must show up at the polls to defend it.