Through “pro-labor” conservatives like Oren Cass, the populist right is offering an updated fantasy that Republicans are champions of the working class. They aren’t and never will be. 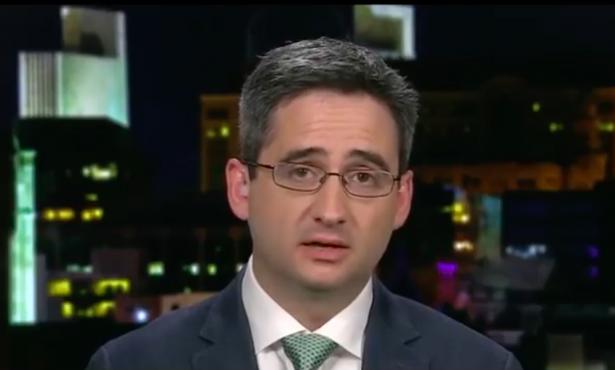 Still from an interview with Oren Cass on Fox News.,(The Next Revolution with Steve Hilton / Facebook)

In a recent interview with New York magazine’s Eric Levitz, American Compass think tank head Oren Cass advocates for a pro-labor conservative agenda in the United States. Cass, a former advisor to Mitt Romney’s presidential campaigns — yes, the same Mitt Romney who famously hates the non-rich — argues that “unions perform many of the exact functions” which conservatives “believe are missing from this society.” Where conservatives decry today’s “social dysfunction,” Cass offers organized labor as a force for combating isolation and forging community.

Cass advocates for sectoral bargaining, which is the collective bargaining of contracts — including such issues as pay scales and working conditions — at the industry level, setting a floor that includes most or all workers in a given sector of the economy. He sees it as a means to “get adversarial bargaining out of the individual workplace” and decrease employers’ reasons to fight unionization.

He’s also taken with labor-management cooperation, arguing that conservatives should support initiatives that give “workers and management the opportunity to interact and collaborate and share information, and, in some instances, give workers an actual say over decision-making.” (It is a sign of how far organized labor has fallen from the heights of its militancy that Cass can imagine unions as a potential ally, rather than an enemy, of his broader conservative goals.)

Cass is appealing to the leaders of the conservative movement, the ultra-wealthy and their avatars in elected office. His emphasis on reducing conflict in the workplace makes that clear, as does his opposition to a generous welfare state. (When Levitz pushes back on his argument that social programs discourage people from working, noting that countries with generous welfare states have higher labor-force participation rates than the United States — think Sweden — Cass is stumped, proclaiming that he’s “not an expert on the sociology of those other countries.”)

This approach to labor won’t deliver for working-class people. Unions are a means to push back on the atomizing, alienating present; Cass is right about that. But the forces of conservatism and its project of completely unfettered capitalism are responsible for getting us to our atomized, alienated present.

Unions rely on solidarity, and that’s the last thing conservatives can countenance. Divide-and-conquer has always been their strategy, pitting workers against one another while clawing back the foundations of a decent life for working-class people. And they use that strategy to prevent workers from gaining power or winning a better standard of living.

Many on the labor-left back sectoral bargaining: Service Employees International Union (SEIU) president Mary Kay Henry supports the policy, and it’s an item on the “Clean Slate for Worker Power” agenda, something of a policy wish list for the labor movement. It’s not sectoral bargaining that’s the problem; it’s the belief that conservatism can be an ally of labor.

But these contradictions don’t mean Cass can’t succeed. The GOP doesn’t need to actually deliver material benefits for workers in order to win more of them to the party.

From Class to Culture War

The majority of the union vote still goes to Democrats. Barack Obama won the vote among union members by thirty-four points. While that lead was cut in half in 2016, Hillary Clinton still carried the demographic by a comfortable margin. But projects like Cass’s seek to change that. If one of the stories of the past few decades is that the Democratic Party abandoned workers (who, it can’t be emphasized enough, are the majority of the population) and treats unions simply as cash cows, another is about the Republican Party’s response.

Since at least Ronald Reagan, the party has transmuted class war into culture war, papering over the conflict between capitalists and workers by harping on so-called social issues like abortion even as it wages an all-out offensive against working-class people.

The strategy seems to have some legs: as affluent and highly educated voters defect to the Democratic Party, the Republican Party’s voter base is becoming more working-class. While the post-2016 discussion overstated the degree to which Trump’s base is working-class — in reality, it’s the “beautiful boaters” and others in the same tax bracket who are his central supporters — he won 43 percent of the vote among union households, close to the share Reagan received. According to Nate Silver, this shift among union voters was enough to swing the election.

There are limits to how far this strategy can go: Trump’s xenophobic, nationalist nostalgia is aimed at white men, a group that constitutes a shrinking segment of the working class. The rank and file in the unions that Trump most directly courts, North America’s Building Trades Unions (NABTU), are divided, with an internal NABTU poll finding “a dead heat in six swing states, with Biden receiving 48 percent of the vote and Trump 47 percent,” according to Politico. Union leaders are overwhelmingly on Team Biden, and many of the country’s biggest unions are backing the Democratic candidate.

But the Republicans can still do some damage. The ultra-rich are as in control of the GOP as ever, but they’ve managed to bring along rising numbers of workers for the ride.

The populist right will continue dining out on Democrats’ failure to fight for the working class. Joe Biden did back NAFTA and the Trans-Pacific Partnership (TPP), and Obama did burn unions on the Employee Free Choice Act. At the state level, Virginia Democrats refused to repeal right-to-work despite gaining unified control of the state government last year, with Virginia Democratic governor Ralph Northam reassuring business leaders he does not support such action.

Pro-worker rhetoric and even the occasional good policy, such as the Protecting the Right to Organize (PRO) Act, a labor law reform bill introduced by Rep. Bobby Scott (D-VA) and Senator Patty Murray (D-WA) that would increase protections for labor organizing and collective bargaining, and effectively prohibit state right-to-work laws, isn’t enough to convince many working-class people that the Democrats will ever fight for them.

And rightfully so: the Democrats still seem to be tacking to the suburbs and prioritizing wealthy donors. Even as the Republican Party currently has no platform, Democrats haven’t figured out how to take advantage of their opponents’ incoherence — in part because they refuse to embrace a robust working-class agenda. Figures like Cass emerge from such a vacuum.

Meanwhile, the Republican Party remains unwavering in its commitment to tax cuts for the rich and deregulation. Even in the midst of a pandemic, the GOP is fighting to keep workers’ backs against the wall. What is true now more than ever is that this upwardly redistributive program is accompanied by a culture war that shields donors from criticism while positioning city dwellers and immigrants as the enemy.

The Party of Owning the Libs

Such a single-minded agenda was illustrated in a recent Politico article. Brendan Buck, who the publication describes as “a longtime senior congressional aide and imperturbable party veteran if ever there was one,” characterizes the GOP’s agenda as “owning the libs and pissing off the media.”

This focus on the most superficial sort of culture war energizes Trump’s base. But behind the bloviation, conservative leaders know the party’s tank is running low, and they’re casting around for new ideas.

Take David Brooks, a “never-Trump” Republican. In an August 2020 column, he details one path forward, discussing four senators: Marco Rubio, Josh Hawley, Tom Cotton, and Ben Sasse. In Brooks’s estimation, these men share “certain Trumpian principles”: everything is not OK, economic libertarianism is not the answer, the working class is the heart of the Republican Party, China changes everything, the managerial class betrays America.

The four youngish senators diverge from there, but the milieu he identifies is real. His interest in their ideas is further evidence of the churning happening backstage. And here again, Cass is waiting in the wings, first on Brooks’s list of “policy wonks and commentators supporting a new Working-Class Republicanism.”

Rubio, who signed a recent American Compass proposal, released on Labor Day and calling for the “reform and reinvigoration of the laws that govern organizing and collective bargaining,” is a fraudulent advocate for workers. Sure, he’s written op-eds that wax nostalgic about “restoring the dignity of work,” complete with remembrances of walking the picket line with the Culinary Workers Union in Las Vegas. But the AFL-CIO gives him an 8 percent lifetime score.

Hawley, a Republican Missouri senator Cass collaborates with and praises, is just as phony. He often refers to the “great American middle,” those unsung Americans being sold out by the “cosmopolitan elite.” Yet he’s funded by the Koch brothers and the Compass Group, supported right-to-work in his home state (losing to a campaign that defeated the measure in a 2018 referendum), and opposed efforts to raise the minimum wage.

If only hypocrisy and insincerity mattered. But they don’t.

Desperately Seeking a Program After Trump

Owning the libs may well be enough to win Trump the White House again this year, but it won’t motivate voters forever. Conservatives like Brooks are looking for a post-Trump program, and the likes of Cass, Rubio, Hawley, and, of course, Tucker Carlson offer one possible future. I can’t predict whether their ideas will be taken up by Brooks types, or the GOP’s Bannonite wing, or neither — there are certainly parts of the Right with no interest in their ideas. But given organized labor’s immense weakness, and Democrats’ failure to seize the moment at a time of complete ideological bankruptcy within the Republican Party, “pro-labor” conservatives won’t be going away anytime soon.

Cass’s project is a contradiction, requiring him to ignore the reality of the GOP as the country’s most enthusiastic party of capital. Either the Left or the Right will determine what follows the discrediting of neoliberalism. On the Left, the nascent socialist movement offers one vision of what the future could look like. The populist right is offering something different: a fantasy that Republicans are champions of the working class.

Alex N. Press is an assistant editor at Jacobin. Her writing has appeared in the Washington Post, Vox, the Nation, and n+1, among other places.