A package of bills to improve antitrust enforcement passes the House. 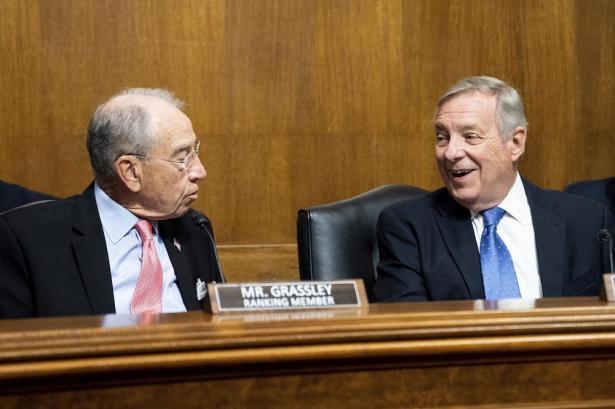 Sens. Dick Durbin (D-IL) and Chuck Grassley (R-IA) speak at a hearing of the Senate Judiciary Committee on September 7, 2022. The two have recently collaborated on an antitrust bill that is likely to become law.,Michael Brochstein / SIPA USA

The House of Representatives took an uncharted step yesterday, passing a package of three bills that would update America’s antitrust laws for the first time in decades. It wasn’t the antitrust bill that most people have been talking about, the one that would end Big Tech platforms promoting their own products ahead of rivals. Chuck Schumer hasn’t even brought that to the Senate for a vote. But this more modest set of actions reveals the coalition that could push that bill over the line soon. More importantly, it asserts Congress’ role in antitrust, which for decades has been twisted and manipulated by the courts.

The first of the three bills is the Merger Filing Fee Modernization Act, which will give the Justice Department’s antitrust division more funding to pursue cases by increasing merger filing fees on large companies and reducing them for small and medium-sized ones. Second is the State Antitrust Enforcement Venue Act, which passed the Senate unanimously in June, and would end the practice of state antitrust suits getting merged with private suits and put into the Multidistrict Litigation process, moving them away from where they were filed (often to venues friendly to monopolists, like when Big Tech cases are consolidated in the Northern District of California). This will not only enhance state-level antitrust enforcement but speed up the cases as well.

Finally, there’s the Foreign Merger Subsidy Disclosure Act, which would force any merging entities to disclose subsidies received from the Chinese government. This is an odd choice for inclusion in this package, but Sen. Tom Cotton (R-AR) wrote it, and so it will likely grab his vote should this get to the Senate.

The three bills got merged into a package that passed 242-184, and the makeup of that vote is interesting. There were 39 Republican yes votes and 16 Democratic no votes. Eleven of those 16 Democrats were from California, following the lead of Zoe Lofgren, who represents Silicon Valley and whose daughter works on Google’s legal team.

Lofgren spoke on the House floor yesterday, making the absurd yet predictable argument that the bill bans content moderation, a go-to claim for opponents of stronger antitrust laws that attempts to split the left-right coalition. It didn’t work here because it’s ridiculous to think that a bill increasing filing fees and changing venues for antitrust cases would somehow ban content moderation. The way she instinctively reached for that argument as an all-purpose debate ender exposes the hollowness of it when applied to other bills.

On the Republican side there were 39 yes votes, reflecting a kind of power struggle within the GOP. There’s a staunchly pro-business side that only wants to use opposition to monopolies, mostly Big Tech, as a way to work the refs and get better treatment on social media. Rep. Jim Jordan (R-OH) leads this crew. And then there’s the side that looks at these issues more in the manner of actual populism, recognizing that capitalism needs competition to survive. Based on these numbers, that includes one-fifth of the House GOP caucus, which isn’t much but enough to carry bills to victory under the current partisan configuration.

This bill should have a relatively easy time passing the Senate in the lame duck session. One of its main components already passed the Senate unanimously, another was written by a Republican, and the filing fee piece is a bipartisan Durbin-Grassley bill. It certainly doesn’t go as far as the Big Tech self-preferencing bill; it doesn’t address specific industries. But it would quietly, slowly, make antitrust enforcement better, and in a small way discourage the urge to concentrate among the biggest corporations. It’s worth celebrating Congress’s return to the stage in setting the competition rules.

Become A Member. Pledge to support fearlessly independent journalism by joining the Prospect as a member today.