Celebrity chef José Andrés, owner of 31 restaurants, has made a name for himself as a philanthropic restaurateur. But while he generates headlines with displays of generosity, his company is quietly trying to block restaurant workers from receiving better pay. 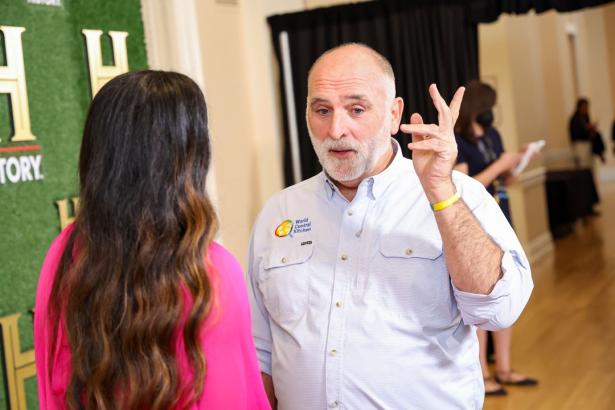 etween hobnobbing at the Time 100 Gala, clashing with former president Donald Trump, promoting his book on MSNBC’s Morning Joe, starring in a Ron Howard documentary, dishing out meals to refugees at the Ukrainian border, and cinching a nomination for the Nobel Peace Prize, celebrity chef José Andrés has made a name for himself as a philanthropic restaurateur with an altruistic vision for his business empire.

Yet back in his home base of Washington, DC, Andrés’s company is trying to block restaurant workers from receiving better pay. Campaign finance records show Andrés’s firm is helping fund opposition to a ballot initiative that would phase out the lower minimum wage for the city’s tipped workers — despite Andrés’s calls to eliminate the subminimum tipped wage in New York. Andrés previously opposed a similar DC tipped wage initiative, which voters overwhelmingly passed in 2018 before the DC council blocked it.

The episode highlights the contradiction between the saintly image Andrés has carefully cultivated and his Washington-based restaurant empire’s focus on the bottom line: while Andrés generates headlines with displays of generosity, he’s working to deny a steady, living wage to his own employees and tens of thousands of other DC workers.

Andrés — who owns thirty-one restaurants, including Michelin-starred minibar in Washington and Hudson Yards anchor Mercado Little Spain in New York — is part of a group of restaurant owners who together have spent more than $350,000 opposing the DC initiative. While restaurant industry representatives say they are doing so to keep their operations afloat and staff employed, advocates for the ballot measure say restaurant owners are simply trying to crack down on worker organizing and demands for better working conditions inspired by the turmoil of the COVID-19 pandemic.

“People love and respect this man so much for the humanitarian work he does, as they should,” said a server at a Andrés restaurant in DC, who spoke on the condition of anonymity for fear of retaliation. “The idea that he is so in favor of helping refugees and immigrants, how can you be that pro-immigrant and be opposed to raising wages for the many, many immigrants that work for your company? It doesn’t add up.”

The District of Columbia Tip Credit Elimination Act of 2021 — Initiative 82 — is on the ballot for DC voters in November. If passed, the measure would gradually increase tipped workers’ base pay to meet the higher minimum wage for all workers by 2027. The tipped wage in Washington is currently $5.35 per hour, compared to $16.10 for other workers.

District restaurateurs including Andrés — the bulk of whose business is in DC — have put together hundreds of thousands of dollars to oppose the initiative. A recent campaign finance report revealed that Andrés’s restaurant group ThinkFoodGroup LLC contributed $10,000 to the No to I-82 campaign on September 1. According to the report, No to I-82 had spent $80,952 in a two-month period over the second half of the summer, with $52,248 in cash on hand at the end of the period. The DC Committee to Build a Better Restaurant Industry (Yes on I-82) spent $3,039 and retained $5,487 at the end of the same period.

When asked to provide comment, Andrés’s public relations representative said in late September that he was not available because he had limited internet access during his humanitarian mission to Puerto Rico in the aftermath of Hurricane Fiona. Later that week, Andrés delivered a keynote address at the White House Conference on Hunger, Nutrition, and Health, making a point to thank his “fellow food fighters.” Earlier this week, when we again requested comment, his spokesperson said it was still unlikely, despite Andrés no longer being in Puerto Rico.

Initiative 82 comes four years after a previous incarnation of the ballot measure, Initiative 77, passed by a 10 percent margin but was overturned by the DC Council. Congress has thirty days to review all legislation passed in DC as a condition of the district’s home rule, a provision that allowed then representative Mark Meadows (R-NC) to introduce an amendment to prevent its enactment. The council beat him to it, with eight of its thirteen members voting to repeal the measure.

Chef Andrés opposed Initiative 77 in 2018, with his company warning voters that ending the subminimum wage for tipped workers would result in price hikes and thus lower tips, prompting job cuts. This slippery slope argument — while commonly deployed by restaurant industry lobbyists and elite newspaper opinion sections — has no basis in reality. Data show restaurant workers in states without a lower tipped wage generally make out as well or better than workers who receive a subminimum tipped wage.

In 2020, Andrés went on to sign a letter urging then New York governor Andrew Cuomo to eliminate the tipped wage. Andrés was quoted saying, “Life is complicated and nuances are important. I’m supporting this because I have big restaurants in New York and a lot of restaurants in DC. This new proposal in New York is a much more forward-thinking pragmatic response.”

The New York letter additionally called for greater tip sharing and payroll tax relief for restaurants emerging from the COVID-19 pandemic shutdown, arguing this would result in greater racial pay equity while jump-starting the industry’s recovery.

Leading the Charge for Worker Protection

Kathy Hollinger, president and chief executive of the Restaurant Association of Metropolitan Washington (RAMW), a regional trade group that lobbies on behalf of restaurant owners, said in a written statement to us that the DC initiative is “not good for our market. . . . Restaurant operators and tipped employees are standing together to oppose this measure to save the vibrancy of our restaurant industry.”

Greg Casten — an RAMW board member and proprietor of waterfront seafood strongholds Tony and Joe’s, Nick’s Riverside Grill, and The Point, as well as Ivy City Smokehouse — told us in an interview that after forty-five years in the restaurant industry, he fears that the DC area has become unfriendly to businesses like his and worries for up-and-coming entrepreneurs.

According to Casten, the government, not business owners, stands to profit the most from Initiative 82, by increasing the amount of taxable payroll.

“The good waiters will go where they can make more money,” Casten said.

He fears that in the aftermath of Initiative 82 — which he conceded will likely pass — service standards will fall, chalking it up to the “casualization of the eating process, with robots delivering orders.” Right now, says Casten, “When [servers] look at the table and say, ‘Boy, that guy is paying my salary,’ you’re going to be more attentive.”

Initiative 82 proposer and longtime DC server Ryan O’Leary said that this dynamic is part of the problem in the first place, and it has created the conditions for tipped workers to feel unsafe and powerless in the workplace. “As a queer guy, I’ve experienced harassment from both men and women customers, and I’ve never felt comfortable pushing back or standing up for myself because I’m worried if they’re my only table, they might be my hourly wage for that hour,” O’Leary told us. “Even if it goes beyond words, to touching.”

O’Leary added, “In states without a subminimum wage, the rate of harassment in the workplace is half,” citing a study commissioned by his former employer, One Fair Wage, an organization working to eliminate the subminimum wage nationally.

Such experiences inspired O’Leary to start a Facebook group for tipped front-of-house workers at the Hamilton Hotel, a four-star hotel two blocks from the White House. O’Leary said it was a space where workers could share memes, pick up shifts, and post grievances. It was also through this Facebook page that O’Leary learned many of his colleagues didn’t realize they qualified for expanded pandemic unemployment benefits.

“Restaurants were decimated during the pandemic.” Still, O’Leary said, “[Much of Initiative 82 activism] stems a lot from employees realizing their worth [during the shutdown]. When we had extended benefits, it gave us the means to pursue certifications and GEDs. That’s why so many places are unionizing now.”

The anonymous Andrés server agreed that “the moment was ripe.”

“Wage increase will not just affect servers,” the server said:

It will also affect bussers and food runners who most people think make $20/hour, but they get tipped out and they make a lot less money than we do. They deserve to make more. They deserve to have more security in what they’re expected to make. . . . The executives and the office staff at TFG make great salaries. If you can afford to pay your executives six figure salaries, can you not afford to pay your workers $15 an hour?

Representative Bobby Scott (D-VA), who first proposed legislation in 2017 to increase the federal minimum wage to $15 and eliminate lower tipped wages for workers nationally, said in a statement to us, “We know that, when tipped workers are paid the full minimum wage, they have greater financial security and can provide for themselves and their families.”

He continued, “When workers earn decent wages, they strengthen their local economies. Simply put, by eliminating the subminimum wage for tipped workers, we can help ensure that hundreds of thousands of hardworking Americans can make ends meet and strengthen the economy.”

Progressives sought to include Scott’s Raise the Wage Act in President Joe Biden’s COVID-19 relief bill, but conservative Democratic senators quashed the effort. O’Leary, a supporter of Scott and his Raise the Wage legislation, thinks that if Congress won’t intervene to ensure a living wage for tipped workers, it falls on workers at the local level.

“It’s been thirty-one years since the subminimum wage was raised nationally,” O’Leary said. “If they continue to not address the needs of workers, then workers will continue to address their needs at the local level.”

Some states have already eliminated the tipped minimum wage and continue to attract new business. California, for example, currently has a $15 minimum wage for workers at companies with more than twenty-six employees.

Andrés announced in January 2022 that his restaurant company would be opening three new restaurants in Los Angeles.

John Besche is a freelance journalist.