This Is How To Put the Supreme Court in Its Place

There is no consensus for Court reform and there are not the votes for it in Congress. But circumstances do change, often unexpectedly. Should progressives gain the opportunity to make structural changes to the Supreme Court, they should take it. 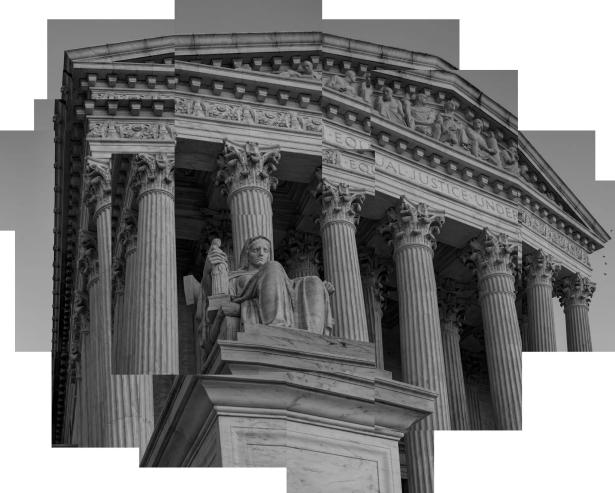 I have written before about the ways that Congress could restrain an overbearing and ideological Supreme Court, using its powers under the Constitution.

In short, Article III, Section 2 states that the Supreme Court shall have “original jurisdiction” in all cases affecting “Ambassadors, other public Ministers and Consuls, and those in which a State shall be Party.” And in all other cases, the court shall have “appellate Jurisdiction, both as to Law and Fact, with such Exceptions, and under such Regulations as the Congress shall make.”

The “exceptions” and “regulations” are key. Most of the business of the Supreme Court is appellate work. It hears cases that have already gone through the federal judicial process. Dobbs v. Jackson Women’s Health Organization, for example, began its life as a case before the U.S. District Court for the Southern District of Mississippi before going to the U.S. Court of Appeals for the Fifth Circuit, which holds appellate jurisdiction over Texas, Mississippi and Louisiana. If Congress can regulate the appellate jurisdiction of the Supreme Court, then it can determine which cases it can hear, the criteria for choosing those cases and even the basis on which the court can make a constitutional determination.

Congress could say, for instance, that the court needs more than a bare majority to overturn a federal statute. Even if you agree that the court has the mostly exclusive right to interpret the Constitution, it doesn’t therefore follow that five justices can essentially nullify the constitutional views of the legislators who passed a law, the president who signed it and the four other justices who affirmed it. Constitutional meaning, in other words, flows as much from the elected branches (and the people themselves) as it does from courts and legal elites.

In the same way that it takes a supermajority of Congress to propose a constitutional amendment, it should probably take a supermajority of the court to say what the Constitution means, especially when it relates to acts and actions of elected officials. If there is any place for mandatory consensus in our government, it should be in an area where any given decision can have broad and far-reaching consequences for the entire constitutional order.

Typically when I write about these issues it is all hypothetical, under the assumption that Congress hasn’t ever used its power to shape the court in this manner. But recently, while reading up on legal disputes during Reconstruction, I learned that at one point Congress attempted to do exactly what I’ve described: limit the court’s use of judicial review to overturn congressional statutes by raising the bar for a decision from a simple majority to a supermajority.

At issue was the Supreme Court’s decision in Ex parte Milligan. In 1864, Union Army officers arrested a group of Indiana Democrats who had been vocal critics of the Lincoln administration and its allies. A military commission authorized by President Abraham Lincoln under a previously issued executive order charged the men — including Lambdin P. Milligan, a leader in the “Order of American Knights,” a pro-slavery, secessionist group — with, among other things, inciting insurrection and conspiring against the U.S. government. Milligan and others were convicted and sentenced to death.

The following year, in May, lawyers for Milligan filed a petition for a writ of habeas corpus in the circuit court district of Indiana. Shortly thereafter, President Andrew Johnson — who took office the month before in the wake of Lincoln’s assassination — commuted Milligan’s sentence to life in prison. In the meantime, Justice David Davis — who rode circuit in Indiana, hearing cases along with a Federal District Court judge as they moved through the appeals process — reviewed Milligan’s petition. Davis did not think that a military commission was the appropriate way to try Milligan, a civilian in a state where there was no active rebellion. The other judge disagreed.

Their disagreement sent the case to the Supreme Court, which held oral arguments the next year, in 1866. Writing for five of the nine justices, Davis declared it unconstitutional to try civilians in military courts when civilian courts were still available. Chief Justice Salmon P. Chase, along with the remaining three justices, agreed that the use of military courts was inappropriate but disagreed that it was unconstitutional. The overall judgment on Milligan’s treatment was unanimous, but on the constitutional issue, there was a 5-4 split.

“For the chief justice,” Walter Stahr explains in “Salmon P. Chase: Lincoln’s Vital Rival,” “the Milligan case was only in part about events in Indiana in the recent past; it was also about the scope of federal authority in the violent present. Chase was well aware that, in many parts of the South, the state civilian courts provided no protections for blacks; only the federal military courts would punish whites for crimes against blacks.”

Republicans in Congress, still struggling with Johnson for control of Reconstruction policy, were outraged. The Chicago Tribune spoke for many Republicans when it said that this decision — along with another that concerned the ability of Congress and the states to require a loyalty or “test” oath for former Confederates who wished to serve in public capacity — showed a “deliberate purpose of the Supreme Court to thus usurp the legislative powers of the government to defeat the will of the loyal men of this nation in the interests of a rebellion crushed by military power.”

The remedy for this problem, The Tribune wrote, was simple: “We think the time has come for Congress to pass a law requiring the concurrence of three-fourths, or at least two-thirds of the whole bench, to pronounce authoritatively against the constitutionality of any act of Congress.”

Republicans took heed of the argument. In 1868, as Congress awaited the court’s decision in another case, Ex parte McCardle, that could undermine its military Reconstruction policies, the House of Representatives debated a bill that would require, according to The New York Herald, “a concurrence of two-thirds of all the members necessary to a decision adverse to the validity of any law of the United States.”

Democrats condemned the bill as one of the “very gravest” of “all the revolutionary measures brought before the last or present Congress tending to subvert and destroy the institutions of the country.” If Congress could override the “deliberate judgment of the Supreme Court of the United States,” declared Representative Samuel S. Marshall of Illinois, as recorded by The New York Times, “there would be established a despotism, not of one man, but an oligarchy or a mob, elected by the people, but usurping powers never given to it by the Constitution or the people.”

Representative John Bingham of Ohio, author of the 14th Amendment and a Republican, disagreed. “It would be a sad day for American institutions and for the sacred cause of Republican Governments if any tribunal in this land, created by the will of the people, was above and superior to the people’s power.” The Supreme Court, he continued, in a reference to its decision in Dred Scott v. Sandford, “had disgraced not only itself as a tribunal of justice, but it had disgraced humanity when it dared to mouth from its high seat of justice, the horrible blasphemy that there were human beings, either in this land, or in any land, whose rights white men were not bound to respect.”

The bill passed the House and Senate but it was never signed into law. President Johnson simply refused. In February, the House voted overwhelmingly to impeach Johnson, who was eventually acquitted in the Senate by a single vote. After this, as far as I can tell, Republicans in Congress made no further effort to force the issue.

In November, Republicans won the White House with Ulysses S. Grant at the top of the ticket. In 1869, a Republican Congress passed a law that set the size of the Supreme Court at nine justices (up from eight) and provided that any justice over 70 with sufficient experience could retire at full salary for the rest of his life. By mid-1870, Grant had appointed two associate justices of the Supreme Court, who would go on to affirm his policies. Republicans were content that the court was in their hands.

The point of all this is to say that disputes over the Supreme Court’s power of judicial review are not new. The reforms to curb it, likewise, are not novel. And even if you stipulate that the Republicans of 1868 were motivated by partisan concerns, it is also true that these Republicans — the lawmakers who wrote the Reconstruction amendments and reshaped our entire constitutional order — grasped a serious problem with the Supreme Court’s role in our ostensibly democratic political system. Their experience of the previous decade — of Dred Scott and the secession crisis and the war — had put court reform at top of mind, even if they ultimately only took minor steps to reshape the institution.

But this decision to spare the court the rod of discipline undermined the Republicans’ own political project, although they could not see this in the moment. Within 20 years, the Supreme Court would render much of the 13th and 14th Amendments a dead letter. And by the end of the century, the 15th would have almost no impact on life in the South.

Despite some of the more interesting ideas that came out of President Biden’s court reform commission, there is no chance at this time for serious court reform. There is no consensus for it within the Democratic Party and there are certainly not the votes for it in Congress. But circumstances do change, often unexpectedly. Should progressives gain the opportunity to make structural changes to the Supreme Court, they should take it. Democrats in the 21st century should not make the same mistake Republicans in the 19th century did.