Democrats ask ‘what’s the endgame,’ then withdraw the question (which nonetheless persists). 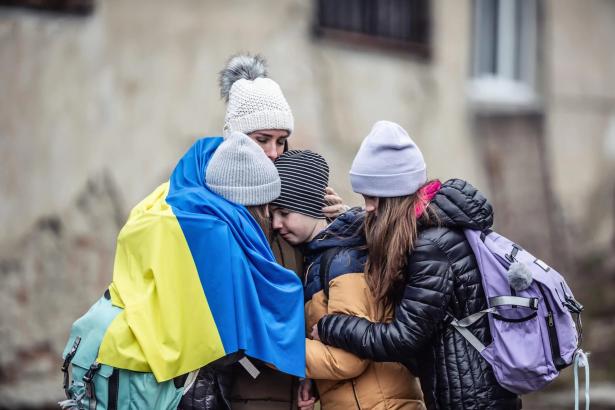 A Ukrainian family gathers across the border as they become refugees from the war tearing apart their country.,

Now you see it; now you don’t. This afternoon, roughly 24 hours after 30 House Democrats sent a letter to President Biden urging him to try to negotiate a settlement of the Ukraine War with Vladimir Putin, the signatories withdrew the letter. Turns out their signatures were gathered in early and midsummer, before Ukraine had begun some successful counteroffensives. At the time, Republicans had not yet been vowing to stop U.S. aid to Ukraine—a position the 30 Dems have made clear they oppose; they said they favored both negotiations and a continuation of aid. Within the past week, however, Kevin McCarthy (who inspires no confidence he could identify Ukraine on a map) has promised that a Republican House majority would end aid to Ukraine, which made yesterday’s letter look like a piling on against Biden administration policy and Ukraine.

Apparently, most of the signatories didn’t know the letter would be sent yesterday; some appear to have believed it was effectively dead. Now, it is—though the questions it raised and the critique it posed remain unanswered.

That critique was posed most succinctly by George Beebe of the Quincy Institute for Responsible Statecraft. Beebe was quoted, in The Washington Post’s story that broke the news about the letter, as saying, "The risk of the [administration’s] strategy is it has no conception of an endgame." That’s true enough, although the only parties that appear to have conceptions—albeit diametrically opposed ones—of an endgame are Russia and Ukraine.

Despite the ocean of uncertainty and contingency in which we all are bobbing around, there are, at least, a host of distinct, identifiable tendencies in how Americans and the West think about Putin’s war. To name just a few, there are, to begin, the simply wrong-headed, including:

Then there are those who support the U.S. support for Ukraine, in part or in whole. They include:

The 30 signatories to the now-withdrawn letter fall into both of those latter two categories—as, I suspect, do most liberals and progressives generally.

How long the American people will support our aid to Ukraine is anybody’s guess. The Republican base is now weaponizing the issue as part of its anti-Biden diatribes, but there’s no telling whether this opposition will overflow the base. Or, more accurately, when this opposition will overflow the base, as our support, however necessary and commendable, cannot be indefinite.

Used with the permission © The American Prospect, Prospect.org, 2022. All rights reserved.