film In ‘Armageddon Time,’ a White Director Avoids a Hollywood Ending About Racism

James Gray set out to make "the anti-nostalgia movie" about his relationship with a Black classmate and anti-Blackness in the '80s. 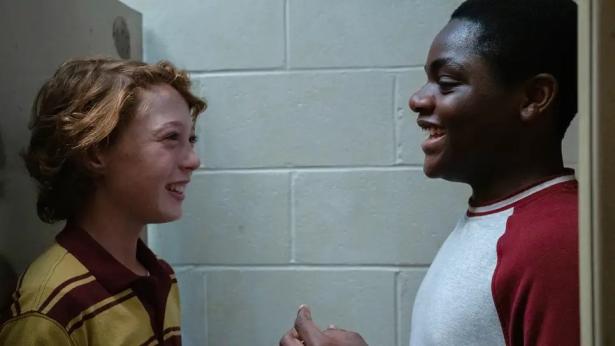 Director James Gray said he wrote his new movie, Armageddon Time, in 2019, but the endeavor feels very 2020. It is a reckoning. A portrait of Gray’s youth in Queens in the early ‘80s, it is, by Gray’s design, “the anti-nostalgia movie.” It concerns itself mostly with the negotiations his avatar Paul (Banks Repeta) makes with a Black classmate in sixth grade and his casually racist family. It admirably avoids valorizing Paul’s upstream swim—he’s an incompetent white savior, caving frequently to societal pressure and leaving his disadvantaged friend Johnny (Jaylin Webb) in the lurch. How much could be reasonably expected from a sixth grader in 1980 is another question, though, and there is an argument to be made that by merely presenting Paul’s ability to think outside what he’s being fed by his family, Gray stands to soak up some virtue. His character might not be admirable, but isn’t it admirable for Gray to admit as much in public?

The politics of Armageddon Time trap Gray in a catch-22: It’s beyond time that white directors start considering race and racism, especially as it pertained to their own lives and privilege, and yet because of said privilege, telling these stories risks pat, well-isn’t-that-a-shame conclusions that don’t move the needle but instead reaffirm privilege. They can take on the slimy appearance of sophisticated gloating.

To Gray’s credit, he keeps things as matter of fact as one can about the highly subjective experience of one’s formative years, and his story manages to be clear, yet layered. No rose-colored look back is this grainy, pea-green-and-brown depiction of the early ‘80s. Paul repeatedly witnesses the disparity in the way he and Johnny are treated by their miserable teacher Mr. Turkeltaub (Andrew Polk). He hears his Jewish family, many members of whom survived the Holocaust, use anti-Black language. His parents, Esther (Anne Hathaway, who’s such a pro that she makes magic out of a menial stock mom role with impeccable naturalism) and Irving (a similarly fantastic Jeremy Strong), insert race needlessly into conversations—“Your mother said you and some Black kid were smoking drugs in school,” hollers Irving after Paul and Johnny get caught smoking weed in the bathroom. This leads to a terrifying scene in which a raging Irving beats Paul with a belt, then enrolls Paul in a private school. There kids say the N-word and ask with disgust if a Black person has ever been in Paul’s house. The school is supported by Fred Trump, Donald’s father, and we watch Maryanne Trump (Jessica Chastain in a cameo) address the students.

The entire movie is set against the backdrop of the 1980 presidential election. In the background of one scene plays footage of Ronald Reagan predicting armageddon should the U.S. become another Sodom and Gomorrah.

The presence of Paul’s grandfather, Aaron (Anthony Hopkins), helps to detoxify the air—he encourages his grandson to be a “mensch” to people like Johnny that are otherwise mistreated within culture. (The warmth Hopkins exudes is diametrically opposed to his most famous performance as the cannibalistic sociopath Hannibal Lecter in the Silence of the Lambs movies.) When Johnny catches wind that he may be entered into foster care as a result of his caretaking grandmother’s illness, he starts staying in Paul’s small, open clubhouse in his backyard. (“Be careful, your father saw a Black boy sneaking around the alleyway, so make sure you lock everything up,” warns an unaware Esther.) Paul hatches a plan to steal a computer from his well-funded private school so that he and Johnny can pawn it and run away to Florida. His idealism and naïveté prevent him from understanding that the stakes in attempting such a heist are not at all equal for Paul and Johnny. Paul learns a lesson that was valuable enough so that, decades later, his real-life counterpart rendered it in cinema. Johnny, presumably, has what he already understood about the world affirmed.

The real life Johnny is dead, by the way—though Gray said that he “loved” his friend, they fell out of touch following a similar attempt at theft (though it was of Star Trek blueprints from Bloomingdales, decidedly less valuable than a computer). In the promo tour for Armageddon Time, Gray has come off as somewhat glib regarding his childhood friend. He said to Deadline:

I don’t know the exact year [of his death] because I only learned about it in the early ’90s, several years afterwards. He was killed in some drug deal in Jamaica, Queens. I don’t know the details, it would take a bunch of forensics to unearth it, but it can be found if I had the motivation.

What Gray says in his art is more sensitive and delicate, an indication of how useful medium can be to one’s message. Incidentally, during this press cycle at least, Gray has also exhibited the habit of calling himself an artist while apologizing for it. To Indiewire: “I think the job of the artist—if I can use that word—is to find what’s wrong with the world through what’s most vulnerable about us, and then reveal that to you.” To the Los Angeles Times: “What is it that’s important to you, if I can use this word, as an artist?” To Variety: “To me it’s the responsibility of the artist—if I can use that big, fancy word—to remove the wall that is naturally constructed between artist and the work, actor and character, director and actor, director and script, to try and be as honest as I can about myself and get more directly at what my definition of good art is.”

Ultimately, Armageddon Time is riveting because it is, as these quotes suggest, messy and resistant to the kind of Hollywood ending that might make this material easier to swallow. Paul learns that life is not fair, though breaking with the convention of how such lessons are generally taught in art, he learns that he’s the beneficiary of that unfairness. As his father tells him: “Sometimes some people get a raw deal, and I hate that. It’s the worst thing in the world, but you have to survive. So all you can do now is you make the most of your break and do not look back.” The movie lets that sink in. Some viewers will see it as a revelation; others who are all too familiar with witnessing disparity from the other side of the tracks will just find it redundant.