This is a story about industrial corruption and the control of workers in that time… the late 19th century was an extraordinary period for the birth of the Union Movement and of people standing up for their rights. 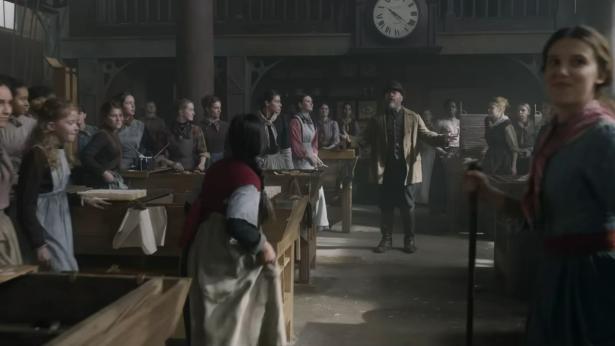 Enola Holmes is back in the game for her second film, which is now streaming on Netflix. The super sleuth’s rise as a clever fixer in her own right takes an interesting turn this time around. While the first film leans into the first Enola Holmes book Enola Holmes 2 centers around Sarah Chapman, a match factory worker who is missing, and the girls around her. The Match Girls’ strike is a story director Harry Bradbeer couldn’t wait to explore. “The first [film] was about constitutional change,” he told Nerdist in a recent interview. “Let’s make this about industrial corruption and the control of workers in that time… the late 19th century was an extraordinary period for the birth of the Union Movement and of people standing up for their rights.”

Enola discovers that Chapman’s case is far bigger than she could imagine. However, Holmes takes it on to solidify her name among detective greats. Enola Holmes 2 is quite the thrill ride and will leave many wondering if Sarah Chapman and the Match Girls’ Strike is a real-life event or not. While there are some creative liberties taken for entertainment, Chapman, the Match Girls, and the big strike are indeed a part of British history. Here’s what the Match Girls’ Strike looked like in real life.

Who Is the Real Sarah Chapman, and What Role Does She Play in Enola Holmes 2?

In Enola Holmes 2, Sarah Chapman is a dancer and matchstick worker, also known as Match Girl, who is missing. Her found sister Bessie is worried about her and asks Enola to help find her. And boy, is Bessie right on time because poor Enola is two seconds from abandoning her detective agency. As the film unwinds, Sarah Chapman reveals herself to be quite the investigator, mistress of disguise, and collector of evidence. Her intentions are to expose a cover-up of the unsafe (and often deadly) working conditions for herself and the other Match Girls in her factory. Sarah gathers a swath of information to prove her case and gain justice for the girls who have died. This culminates in Enola Holmes 2‘s version of the Match Girls’ Strike. If Enola ever wanted to team up with another girl to solve mysteries, Sarah Chapman would be a great choice.

The real Sarah Chapman (born in 1862) worked at Bryant & May, a London-based matchstick-making company formed in 1843 as a matchmaking machinist. By 1888, Chapman was a long-time employee making pretty good money. However, poor treatment of workers and terrible working conditions led to a boycott. (More on that later.) Annie Besant, a writer, and advocate for social reform, met with workers to discuss their frustrations. Besant published an article about those experiences in June 1888. Soon after, Bryant & May fired a worker after her refusal to sign a management statement countering reports about abusive working conditions. The day after Independence Day, around 1,400 girls and women walked out on strike, including Chapman. This strike became known as the Match Girls’ Strike. The next day, Chapman got together with two other women and petitioned Besant to help form a strike committee.

Through this committee, they held meetings and made their case further known to the public, gaining support along the way. The Match Girls’ Strike and this committee led to a meeting with Bryant & May’s management to discuss their demands, which the company later met. Sarah Chapman was also vital in establishing the Union of Women Match Makers. She served as its first representative to the Trades Union Congress.

While we don’t know many details about her later life, we do know she married Charles Dearman, a cabinet maker. Together they had six children. Sarah Chapman died on November 27, 1945, and was buried in an unmarked grave, which later became a point of contention when plans were made to mound over it. (Thankfully, this did not happen.) In 2022, the Match Girls’ Strike got a commemorative blue plaque at the site where Bryant & May used to stand. Chapman’s great-granddaughter Sam Johnson is a trustee of The Match Girls Memorial, the collective that lobbied for the plaque.

A Brief History of Match Stick Girls in London

Not surprisingly, women and girls in 19th-century London didn’t have a ton of work options. Those who didn’t have the benefits of financial and social privilege often worked in factories for small wages in hopes of providing for their families. Or in some cases, young girls did not have a family and were trying to survive.

Some of these factories made matches, hence the name Match Girls. Sulfur and other dangerous chemicals like white phosphorus and potassium chloride were chief matchmaking ingredients. (Red phosphorus also came into the mix as a more stable ingredient over sulfur. But importing it drove up overall costs.) Male factory workers were overwhelmingly the ones involved in that part of the process. As we saw in Enola Holmes 2’s accurate assembly depiction of Match Girls’ lives, the women and girls would gather finished matchsticks with bare hands and place them into boxes. 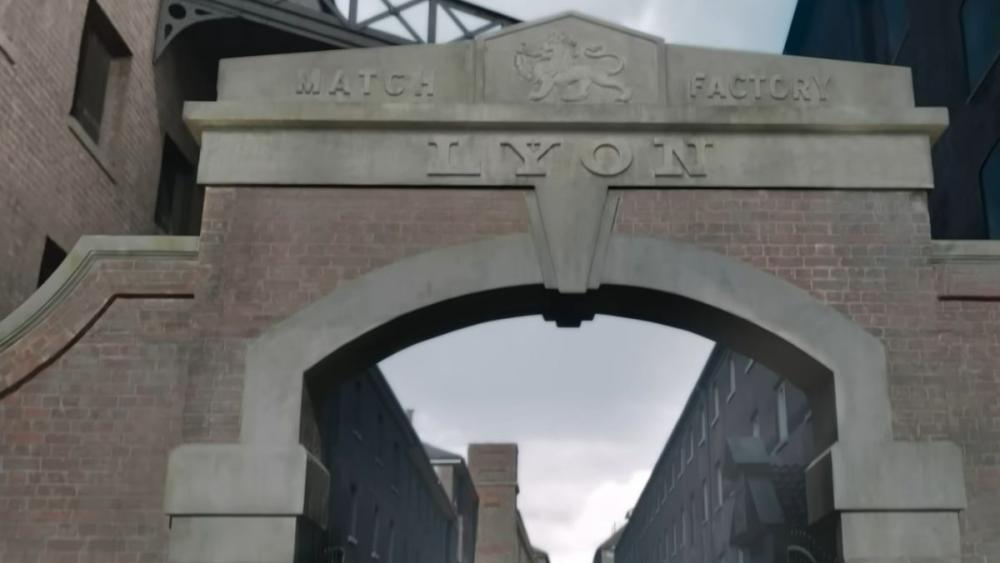 Of course, working closely with chemicals led to some nasty side effects and diseases tied directly to this occupation. In the film, Enola goes undercover at the factory and discovers that there is a mouth check for typhus, an infectious disease. She notices one woman walking by her with a swollen jaw. It’s the briefest scene in Enola Holmes 2 but, in reality, a reason why the Match Girls’ Strike began.

Phossy jaw was a disease stemming from white phosphorus exposure with initial flu-like symptoms and mouth/toothaches. These symptoms are not uncommon for typhus fever, which could be deadly. Death by typhus became a scapegoat for Lord McIntyre and company to cover up the Match Girls’ deaths at the factory. As phossy jaw manifests, it leads to a swelling of the gums and jaw area. Facial disfigurement and even fatal brain damage were often the results of this occupational disease.

The Match Girls’ Strike From Enola Holmes 2 in Real Life

Unfortunately, factories like Bryant & May swept these serious health concerns under the rug. According to workers’ accounts, either you fixed the problem on your own (removing teeth, etc.) or you would be out of a job. There were also frequent complaints about foremen docking pay from the Match Girls for minor infractions like talking, dropping matches, and a “dirty” workspace. Combining the health hazards with strict environments and fourteen-hour workdays, things came to a head in 1888 with women having enough. And, this resulted in the events of the Match Girls’ Strike—an unprecedented event led by women—and the work of Sarah Chapman. 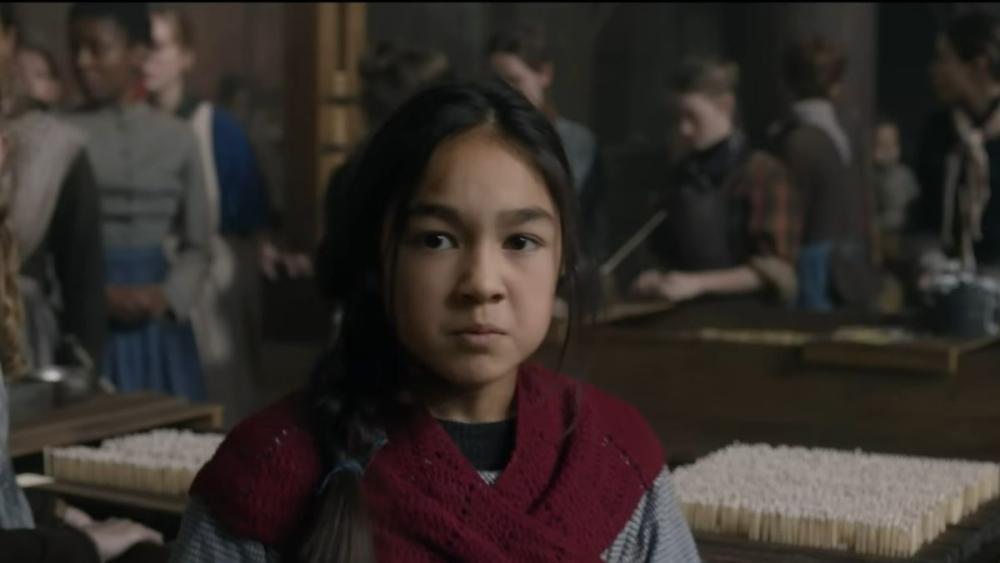 We get a fictional depiction of this triumphant moment towards the end of Enola Holmes 2. Sarah Chapman, Bessie, and Enola rally the girls to advocate for themselves and walk out. And so, we see the fictional take on the Match Girls’ Strike in Enola Holmes 2. In reality, meanwhile, the workers’ actions would lead to the ban of white phosphorus in the manufacture of matches. This ban began in the UK and spread throughout the western world in subsequent years. It sparked people in other industries to use their collective voices to push for more humane working conditions.

In 1901, Bryant & May stopped using white phosphorus, but it proved to be an expensive venture for them. After a series of mergers to keep a foothold in the industry, the original factory in Bow shut down in 1979 with less than 300 workers at the time.

Enola Holmes 2 bringing the history of the Match Girls’ Strike and Sarah Chapman into the fold while maintaining the wit and cleverness we expect in this franchise is a brilliant marriage. And, in a world where many are still binding together, whether through unions or protests, to fight for their rights, it reminds us that we are stronger together as a collective. Even if we have the brilliance of Enola Holmes.

Editor’s Note: Nerdist is a subsidiary of Legendary Digital Networks.

Tai Gooden is currently the Features Editor for Nerdist, covering a wide range of geek culture including Doctor Who, The Walking Dead, and the American Horror Story universe. When she's not writing, she can be found on Twitter (@taigooden) or waiting for the TARDIS to take her away.

Are you deeply passionate about weirdly specific things, like Avengers fan theories, a hard-hitting analysis of the basketball game in High School Musical, the science of how Kylo Ren’s lightsaber really works, or deep dives into the history of Game of Thrones?

Do you find yourself prone to overthinking it when it comes to the rules of fictional worlds?

When it comes to pop-cultural discourse, do you long for a community that is inclusive, intelligent, irreverent, and thoughtful, but also full of cat GIFs?

Then you’re in the right place. Welcome to Nerdist.

Since 2012, Nerdist has been an oasis in the digital desert, a beacon of positivity amidst a sea of cynicism, and a welcoming space to geek out about the many things that we love. With a community of millions of passionate people from all over the world, Nerdist comes together to celebrate our shared love of pop culture. We seek to create honest, thought-provoking discourse that is critical without being cruel, specific without being pedantic, and most importantly fun.

Featuring a diverse array of voices from around the country, Nerdist is your one-stop shop for all things nerd. Whether you want to stay up to date on the latest superhero movie news, laugh your entire butt off at a hilarious trailer mash-up, devise new strategies to conquer your foes in your favorite tabletop games, educate yourself on the real science behind the Marvel Cinematic Universe, or treat your brain to an all-you-can-eat buffet of insightful commentary on the things we all love, Nerdist has something for you.

So whether this is your first visit or your thousandth, welcome to Nerdist. We’re so glad that you’re here.

Want to write for Nerdist? We want to hear from you! Send us your pitches here.