film Once Again, Colonialism Is the Real Enemy in ‘Black Panther: Wakanda Forever’

More than all the various super beings out there, it's the ongoing forces of colonialist exploitation and violence that inform the conflict at the heart of this most recent story. 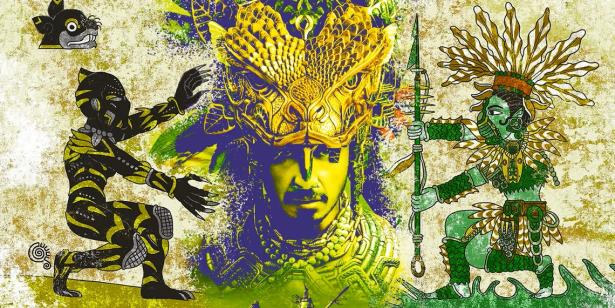 In the world of writer-director Ryan Coogler’s Black Panther: Wakanda Forever, as well as the Marvel Cinematic Universe more broadly, there are plenty of enemies threatening these characters. There are those like the menancing Thanos that are able to snap millions out of existence or the evil Ego who consumes entire planets. However, the greatest threat facing the world of Wakanda we already knew from films prior and the newly introduced undersea kingdom Talokan is a force that is historical in its origins though painfully present in its impacts. More than all the various super beings out there, it's the ongoing forces of colonialist exploitation and violence that inform the conflict at the heart of this most recent story.

This is nothing new for Coogler as the first film, Black Panther, was explicitly about how Wakanda itself had managed to remain unscathed from the brutality around them by keeping hidden. However, the internal conflict was about whether this was something that should change so that Wakanda could help those around the world who weren’t lucky enough to be born in an invisible kingdom. The entire perspective of the riveting Killmonger (Michael B. Jordan) was that Wakanda had been selfish in its isolation and left too many to suffer while they thrived. He was an antagonist in that film as he sought to take the kingdom to war against the rest of the world, but his perspective still resonated in how justified it was. He would end up giving his life for his cause and this left an impact on T’Challa (Chadwick Boseman) who tried to do everything he could to right some of the many wrongs plaguing the world by bringing Wakanda out into the open. Alas, this has now made Wakanda a prime target for various world powers who are now seeking to make up for lost time by exploiting the Wakandans however they can.

This is seen early on in Black Panther: Wakanda Forever where, after the tragic loss of T’Challa, his mother Queen Ramonda (Angela Bassett) goes before the United Nations. She isn’t there alone as she brings along captured French soldiers that had attacked one of Wakanda's outposts in order to obtain vibranium. It is a humorous show of force that demonstrates, while Wakanda is not the aggressor, they will defend themselves. Later, the CIA takes a crack at the classic resource extraction game by going into the ocean with a machine designed to find vibranium. In doing so, they cross into the domain of Namor (Tenoch Huerta Mejía) who is acutely aware of where this encroachment leads. Through flashback, we see how he witnessed at a young age the horrifying degradation that can befall the people who find themselves in the crosshairs of colonial powers. In this case, it was the Spanish that decimated everything they came into contact with. There is a hunger to colonialism that will never be satiated and will consume all it can for as long as it can. The film grounds itself in the characters’ attempts to interrupt this tragic trajectory as Namor tries to form an alliance with Wakanda in the hopes that they will be able to protect each other from the outside forces. For all they have in common, Namor remains more attuned to what has happened in history and the fate that awaits both nations in their future.

As we get to observe the vibrant worlds of both Wakanda and Talokan, we see societies that have been able to flourish precisely because they have been protected from the colonialism of the past. While the story frequently shies away from grappling with the full narrative and thematic scope of this element of the story, it is also baked into every frame. It is seen in Namor’s elaborate paintings of Talokan history and the joyous yet tragic funeral ceremony in Wakanda. This freedom for culture and community to operate is antithetical to the goals of colonial powers that seek to impose all-encompassing subjugation. Though the scenes between Everett Ross (Martin Freeman) and Valentina Allegra de Fontaine (Julia Louis-Dreyfus) are often a distraction from the emotional core of the story, there is one conversation that makes clear just how cruel the forces of colonialism are. Everett, who believes he has been secretly providing information to the Wakandans, defends his friends when confronted by Valentina who was aware of his deception the whole time. It rightly makes clear that the United States, the colonial power in this case, would likely not have shown restraint had they had access to the powerful vibranium yet will now justify Wakanda having it to threaten and attack them. It is a looming conflict in a fictional story made busy by MCU excesses, yes, but it also manages to tap into something far more significant.

When you peel back all the spectacle that plays out, there is a more honest undercurrent to Black Panther: Wakanda Forever's worldbuilding that often proves to be sharp in identifying what it is that is behind the threats that face down the characters. Unfortunately, many of these intriguing ideas don’t get as explored as deeply as one would have hoped. In many instances, it feels like the film is just about to arrive at something more incisive before we get thrown back into the frequently clunky machinations of the plot. Obviously, it would be unlikely for a movie like this to abandon the recurring blockbuster trappings to solely focus on a sociopolitical storyline. Still, one had hoped it could do so a little more thoroughly especially as the original had managed to tease out some surprisingly complex storylines while also being a thrilling superhero film. This doesn’t quite come together as well it did there as this film frequently has to juggle a multitude of moving parts. With that being said, even as it requires looking a little bit harder than the prior iteration, the way Coogler is able to give glimpses of wondrous worlds as a way of establishing what is lost when colonialism takes hold reveals how there is a lot more going on in the background. No matter how many CGI battles against fantastical forces populate these stories, the more they grapple with these deeper ideas the better they'll be.