New Jersey’s teachers are now required to teach climate change beginning in kindergarten, and across most subjects, including art, social studies, world languages and PE. Supporters hope the lessons will spread 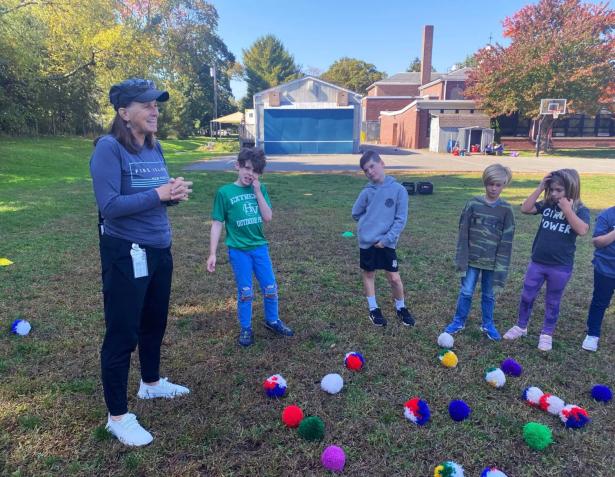 PENNINGTON, N.J. — There was one minute left on Suzanne Horsley’s stopwatch and the atmosphere remained thick with carbon dioxide, despite the energetic efforts of her class of third graders to clear the air.

Horsley, a wellness teacher at Toll Gate Grammar School, in Pennington, New Jersey, had tasked the kids with tossing balls of yarn representing carbon dioxide molecules to their peers stationed at plastic disks representing forests. The first round of the game was set in the 1700s, and the kids had cleared the field in under four minutes. But this third round took place in the present day, after the advent of cars, factories and electricity, and massive deforestation. With fewer forests to catch the balls, and longer distances to throw, the kids couldn’t keep up.

“That was hard,” said Horsley after the round ended. “In this time period versus the 1700s, way more challenging right?

“Yeah,” the students chimed in.

“In 2022, we got a lot of carbon dioxide in the atmosphere,” said Horsley. “What’s the problem with it, what is it causing?”

Two years ago, New Jersey became the first state in the country to adopt learning standards obligating teachers to instruct kids about climate change across grade levels and subjects. The standards, which went into effect this fall, introduce students as young as kindergarteners to the subject, not just in science class but in the arts, world languages, social studies and physical education. Supporters say the instruction is necessary to prepare younger generations for a world — and labor market — increasingly reshaped by climate change.

“There’s no way we can expect our children to have the solutions and the innovations to these challenges if we’re not giving them the tools and resources needed here and now,” said Tammy Murphy, the wife of New Jersey Gov. Phil Murphy and a founding member of former Vice President Al Gore’s Climate Reality Action Fund, who pushed to get the standards into schools. Just as students must be able to add and subtract before learning calculus, she said, kids need to understand the basics of climate change — the vocabulary, the logic behind it — before they can tackle the climate crisis.

Historically, climate change has not been comprehensively taught in U.S. schools, largely because of the partisanship surrounding climate change and many teachers’ limited grasp of the science behind it. That started to change in 2013, with the release of new national science standards, which instructed science teachers to introduce students to climate change and its human causes starting in middle school. Still, only 20 states have adopted the standards. A 2020 report from the National Center for Science Education and Texas Freedom Network Education Fund found that many states that didn’t follow the new guidance weren’t explicit in their standards about the human causes of climate change, and a few even promoted falsehoods about its causes and degree of seriousness. Meanwhile, discussion of climate change outside of science class remains relatively rare, educators and experts say.

New Jersey is trying to change that, but it’s not a simple task. Like teachers around the country, educators here are exhausted after years of Covid disruptions, and, as elsewhere, some schools face dire teacher shortages. On top of this, many educators don’t feel prepared to teach climate change: A 2021 survey of 164 New Jersey teachers found that many lacked confidence in their knowledge of the subject, and some held misconceptions about it, confusing the problem with other environmental issues such as plastic pollution.

For now, the climate instruction requirements haven’t faced much pushback from climate deniers and conservatives, who’ve trained their attacks instead on the state’s new sex-education standards. But state officials anticipate some criticism as the lessons begin to roll out in classrooms.

A more pressing concern — and one that plagues any education initiative because of local control of schools — is that the lessons are rolling out unevenly across the state. Schools in affluent towns like Pennington tend to have more time and resources to introduce new instruction; schools in poorer communities, like Camden, that are often the most vulnerable to climate disasters, may lack the resources to do so.

New Jersey is making some effort to help teachers adopt the standards, setting aside $5 million for lesson plans and professional development, and enlisting teachers like Horsley, who holds a master’s degree in outdoor education and has a passion for the environment, to develop model lessons.

Supporters are trying to ensure that teachers have plenty of examples for teaching the standards in age-appropriate ways, with racial and environmental justice as one of the key features of the instruction.

“It’s not like we’re asking kindergarteners to look at the Keeling Curve,” said Lauren Madden, a professor of education at the College of New Jersey who prepared a report on the standards, referring to a graph showing daily carbon dioxide concentrations. “We’re trying to point out areas where we can build some of those foundational blocks so that by the time students are in upper elementary or middle school, they really have that solid foundation.”

The hallway outside Cari Gallagher’s third grade classroom at Lawrenceville Elementary School is decorated with messages from students about what they can do to fight climate change. Credit: Caroline Preston/The Hechinger Report

On a recent weekday, Cari Gallagher, a third grade teacher at Lawrenceville Elementary School in central New Jersey, was reading to her students the book “No Sand in the House!” which tells the story of a grandfather whose Jersey Shore home is devastated by Hurricane Sandy. Later, the students sat down to write about what they’d heard, drawing connections between the book and their own lives, world events or other books they’d read.

After the writing exercise, Gallagher directed the students to split into small groups to build structures that would help provide protection against climate change calamities. The kids used Legos, blocks, Play-Doh and straws to create carports, walls and other barriers.

That same morning, a kindergarten class at the elementary school listened as their teacher, Jeffrey Berry, held up a globe and discussed how different parts of the world have different climates.

At Hopewell Valley Central High School, in Pennington, art teacher Carolyn McGrath piloted a lesson on climate change this summer with a handful of students. The results of the class — four paintings featuring climate activists — sat on the windowsill of her classroom.

“It felt empowering to see people like me, who reflect me and my identities,” said Mackenzie Harsell, an 11th grader who’d created a portrait of 24-year-old climate activist Daphne Frias, who, like Mackenzie, is young, and is disabled. “This project told me I could do anything.”

Research suggests education does have an impact on how people understand climate change and their willingness to take action to stop it. One study found that college students who took a class that discussed reducing their carbon footprint tended to adopt environment-friendly practices and stick with them over many years. Another found that educating middle schoolers about climate change resulted in their parents expressing greater concern about the problem.

“Education is certainly a way that we could have perhaps slowed down where we are right now in terms of the climate crisis,” said Margaret Wang, chief operating officer with SubjectToClimate, a nonprofit that is helping teachers develop and share climate lessons. More jobs related to climate change are already opening up, said Wang, and kids will need skills not just to discover scientific innovations but to tell stories, advocate, inspire and make public policy.

Back at Toll Gate elementary, Horsley, the wellness teacher, was getting ready to hand off the third graders to their classroom teacher. Before filing back into the school, a handsome brick building that suffered flooding last year during Hurricane Ida, students reflected on the lesson.

Ayla, a third grader dressed in jeans and tie-dye sneakers, said it made her want to “do something” about climate change because “I don’t want it to get so hot.”

Wes, another third grader, said adults could have done more to protect the environment. “I think they’ve done a medium job because they’re still producing a lot of carbon dioxide and a lot of people are littering still.”

“We know about it,” said Abby, who was wearing a shirt emblazoned with the words “Girl Power.” She said it was up to humans to drive less and recycle and protect other species from climate disaster.

“When I first found out we were going to learn about climate change in gym, I was like, that’s surprising, because normally we learn that in class,” Abby added. “But I’m glad we did it in gym,” she continued. “It was really fun.”

Caroline Preston is a deputy managing editor who helps oversee Hechinger's K-12 and higher ed coverage. She previously worked as a features editor with Al Jazeera America’s digital team and a senior reporter with The Chronicle of Philanthropy. Her writing has appeared in publications including NBC News, The New York Times, The Washington Post and Wired.com, while stories she has edited or written have been honored by the Data Journalism Awards, the Education Writers Association, the Online News Association and others.

This story about climate change education was produced by The Hechinger Report, a nonprofit, independent news organization focused on inequality and innovation in education. Sign up for the Hechinger newsletter.