At COP 27 Demands for Loss and Damage Compensation Grow Louder

At COP27, nations in the Global South have been increasingly focused on securing the means to address the impacts of climate change that are already here. 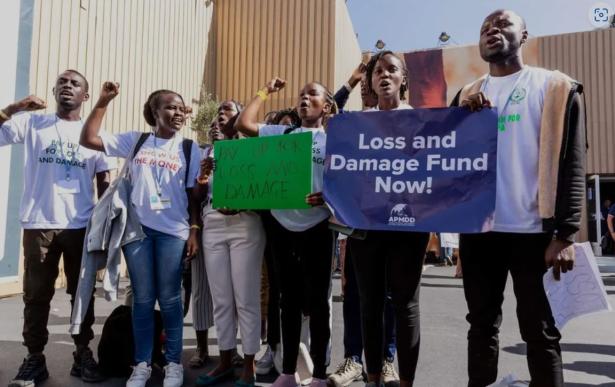 Young activists demand a Loss and Damage Fund to compensate developing countries for the impacts of climate change at the COP27 UN Climate Change Conference in Sharm El-Sheikh, Egypt.,Dominika Zarzycka / NurPhoto // The Nation

On Sunday, November 6, the annual two-week UN climate negotiations kicked off in Sharm el-Sheikh, Egypt, with over 35,000 delegates, NGO workers, journalists, and activists from around the world in attendance. One hundred and twenty heads of state will join, including President Biden, who attended briefly on Friday and will attend again after the G20 for the final days.

The climate talks focus, as usual, on nations’ commitments to reducing greenhouse gas emissions and on transferring funding and technology from developed to developing countries. But this year’s climate conference, also known as the Conference of the Parties or COP 27, addresses two additional issues: compensation from developed to developing countries for loss and damages incurred due to climate change; and human rights violations in Egypt under the current authoritarian regime.

According to the Paris Agreement, which was adopted in 2015, nations from around the world will work to reduce greenhouse gas emissions (ghgs) to limit global warming to 1.5 Celsius (2.7 Fahrenheit), a commitment that was renewed at last year’s COP 26 in Glasgow. The ghg reductions to achieve that goal are known as “Nationally Determined Contributions” (NDCs), which are then tallied by the UN to ascertain the collective reduction. The climate accord stipulated that nations must provide details about how much they will reduce their ghgs and by when.

Initially, nations were to put forward these NDCs by 2020 and then submit new NDCs every five years. But at last year’s COP 26, it was proposed that the NDCs be submitted annually, both to keep nations on track with their commitments and to increase the pressure to ratchet up commitments more frequently, given that action must be taken by 2030 to avoid the irreversible impacts of climate change. As COP 27 kicked off, only 24 of almost 200 nations have submitted new or updated climate plans. Last month, the UN Environment Programme’s “Emissions Gap Report 2022” showed that the current commitments to ghg reductions were insufficient, currently putting the world on a path of 2.8 C by the century’s end.

At the UN climate conferences, nations of the Global North and of the Global South often clash, since the former have historically benefited and continue to benefit from, among other things, the burning of fossil fuels, while nations from the Global South have already been disproportionately experiencing the impacts of the climate crisis, ranging from floods to heat waves to drought, though they have contributed the least to CO2 emissions. In 2009, Global North nations agreed to pay $200 billion per year by 2020 for mitigation technologies (to help reduce emissions) and adaptation programs (to address the impacts of climate change; for example, protecting existing and restoring mangroves and coral and oyster reefs, or managed retreat), but the Global North has failed on this commitment.

A 100-page UN report, Finance for Climate Action, released on November 8, 2022, stated that $1 trillion per year is now needed by 2030 to help nations in the Global South address climate change. These moneys would come from a variety of sources, so this report is not demanding that sum from the UN alone. But it does point out that the issue of climate justice must address historical and present-day inequities.

Meanwhile, the impacts of climate change have continued unabated, so nations in the Global South have been increasingly focused on demanding compensation to address those impacts, pointing out that they have already been suffering. At least year’s COP 26, they pushed for a mechanism for compensation to be created. In what was a first, a draft of the agreement included language acknowledging “loss and damages,” but this, to the outrage of nations from the Global South, was struck from the final agreement. And the opening of this year’s UN climate conference was delayed in large part because of the insistence that loss and damages remains a topic. It is now on the agenda.

Nations from the Global North are concerned about establishing a fund for loss and damages, since they would become legally liable for climate crisis damages, which the majority of the globe is already experiencing and which will only increase. The demand for compensation for loss and damages pushes the legacy of colonialism and resulting global economic inequalities to the forefront. Although no major agreement is expected t0 come out of this year’s COP, the issue is sure to dominate the negotiations.

At this year’s COP 27, attention is also focused on human rights violations of the authoritarian regime of Abdel Fattah el-Sisi. In 2013, then-Gen. El-Sisi toppled Mohamed Morsi, Egypt’s first democratically elected leader, who came into office after the Arab Spring forced Hosni Mubarak to resign in 2011. El Sisi, who has been president since 2014, has banned protests and free speech. In 2019, a law came into effect restricting both. Organizations such as Amnesty International and Human Rights Watch have for years been calling out the crackdowns. To date, over 60,000 dissidents have been arrested and imprisoned. This explosion of arrests of dissidents has prompted a spree in the construction of prisons; one-third of Egypt’s prisons have been built during El-Sisi’s regime.

Alaa Abd El Fattah, a pro-democracy British-Egyptian activist who has been in prison for nine years for speaking up about human rights violations and who has been on a hunger strike for over 200 days, which he escalated to drinking no water as COP 27 began. He is protesting his prison conditions and demanding his release as well as the release of other political prisoners. Fifteen Nobel Laureates have called for El Fattah to be freed.

According to the Egyptian-based media organization Mada Masr, as of October, hundreds have been arrested in Egypt in their homes and workplaces and on the street. They are being held in pretrial detention, accused of “spreading false news and joining a banned group.”

And environmental activists are at great risk in authoritarian-led nations. According to a report published by Global Witness in September, over 1,700 environmental activists have been killed over the past decade, with the largest numbers in Brazil, Colombia, the Philippines, Mexico, and Honduras. Activists from Indigenous communities are disproportionately impacted, making up 39 percent of those killed, though they are only 5 percent of the global population. At COP 27, both human rights and environmental justice will remain at the forefront.

[Tina Gerhardt is an environmental journalist who covers international climate change negotiations, domestic energy policy and sea level rise. She is author of Sea Change: An Atlas of Islands in a Rising Ocean (University of California Press, 2023). Her writing has been published in Grist, The Nation, The Progressive, Sierra Magazine, and Washington Monthly. You can follow her on Twitter @TinaGerhardtEJ.]