A New Republican Civil War Is About To Begin

The GOP’s old guard is pinning their hopes on a Ron DeSantis renaissance. But Donald Trump’s counterestablishment has beaten them once before. 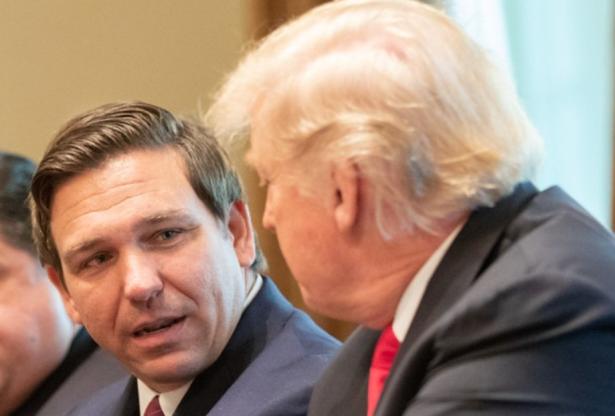 On Wednesday, the Republican establishment—or at least what’s left of it—finally made its move against Donald Trump. The disappointing midterm results, in which many of Trump’s handpicked candidates flopped—largely because they were 2020 election truthers running in swing states—opened opportunity up. The Murdoch empire struck hard and fast, anointing Florida Governor Ron DeSantis—who mimics Trump in both style and substance but is seen as being more palatable and less erratic—as the former president’s natural successor.

Trump, meanwhile, took a battering from others in the party. “Republicans have followed Donald Trump off the side of a cliff,” former adviser David Urban told The New York Times. The anti-anti-Trump National Review has posted a series of articles calling for an alternative and one in which it offered Republicans a stark choice: Pick Donald Trump or pick winning elections. “Almost every one of these Trump-endorsed candidates that you see in competitive states has lost,” former New Jersey governor and Trump frenemy Chris Christie said on ABC after the election. “It’s a huge loss for Trump. And, again, it shows that his political instincts are not about the party, they’re not about the country—they’re about him.” That just about summed up the conventional wisdom—at least among Trump’s opponents.

Trump, meanwhile, has spent the days after the election seething, blaming his wife and other allies for failed endorsements like Dr. Oz, who lost in Pennsylvania’s Senate race. He has also been posting about potential 2024 primary opponents, like DeSantis and Virginia Governor Glenn Youngkin, on his dreary platform Truth Social, where he has strained to regain his 2016 form.

But Trump has also started throwing his weight around. On Thursday, Representative Elise Stefanik, an upstate New York Republican who was a moderate—at least by recent GOP standards—before remaking herself as a Trumpist to rise within the House leadership, endorsed him for president, despite the fact that he is at least five days away from announcing that he will run.

“I am proud to endorse Donald Trump for president in 2024,” Stefanik said in a statement. “It is time for Republicans to unite around the most popular Republican in America who has a proven track record of conservative governance.” J.D. Vance, an anti Trumper turned sycophant who won Ohio’s senate race on Tuesday thanks in part to Trump’s endorsement during the primary, was similarly effusive. “Every year, the media writes Donald Trump’s political obituary. And every year, we’re quickly reminded that Trump remains the most popular figure in the Republican Party,” he said. And on Friday Trump began to meddle in the Republican House leadership race, suggesting that he would only back current Minority Leader Kevin McCarthy’s bid to become speaker if he kissed the ring (again): Appearing on Steve Bannon’s podcast, Trump ally Jason Miller said that McCarthy “must be much more declarative that he supports President Trump in 2024” if he wants to win.

It marked the beginning of what looks to be the GOP’s second civil war in six years.

In 2016, the Republican establishment took on Donald Trump and lost badly. That was partly because it didn’t ever really have a Trump alternative and instead hopscotched between flawed, smarmy candidates like Jeb Bush and Ted Cruz. In 2022, it has seemingly learned some important lessons. For one, it has anointed a successor who is Trump-like, in many ways: DeSantis is an ardent culture warrior who first rose to prominence by opening his state up during the Covid-19 pandemic, has sparred with Disney about wokeness, and recently flew a bunch of helpless migrants to Martha’s Vineyard as part of a sociopathic, Trump-like political stunt.

The establishment has another benefit: Trump is not the candidate he was in 2016. He is increasingly myopic and erratic, even by his own standards. His political program has contracted significantly and now revolves ever more around the personage of Donald Trump, the legitimacy of the 2020 presidential election, and increasingly baroque loyalty tests. Trump is a diminished figure. Unlike in 2016, when he effortlessly cast aside a host of goons, he also appears to be genuinely rattled by DeSantis. He should still be considered the favorite for the Republican presidential nomination, but it is, for the first time in six years, possible to imagine other scenarios. He seems beatable.

But Trump has one asset that he didn’t in 2016. Over the last six years he has built his own political establishment and situated himself as the Republican Party’s most important power broker. Stefanik’s endorsement is a case in point. Fifteen years ago, Stefanik would have made a career as a moderate Republican; in 2018, she saw the writing on the wall, and became one of Trump’s most vociferous backers. She is far from the only one.

Trump has allies in leadership positions throughout the Republican Party: from local and state level organizations to the Republican National Committee. The most important test for Trump as he has built this network is loyalty. Over the coming weeks and month, he will force his allies to bend the knee, or at least try to. He will also use them to attempt to create a firewall between himself and DeSantis, and to make him appear to be the party’s inevitable 2024 nominee. The GOP has been Trump’s party for a long time but, even after Tuesday’s defeats, he has more allies in powerful positions than ever.

If 2016 looked like one man against the remnants of a party, 2022 is far different. The older Republican establishment is working to anoint DeSantis. But it has less power than it did six years ago, when Trump easily brushed it aside. Trump is a broken, erratic figure, but he has more institutional power than ever—the question is whether he knows how to use it.

Alex Shephard @alex_shephard is a staff writer at The New Republic.