Hugo Blick’s revelatory series is a gorgeous, glorious new take on the old west – a lawless land where no one can hear you, or anyone in your way, scream. What matters is that the dehumanization and massacres of the Native Americans, upon whose suffering the New World was built, is not forgotten but ever present. 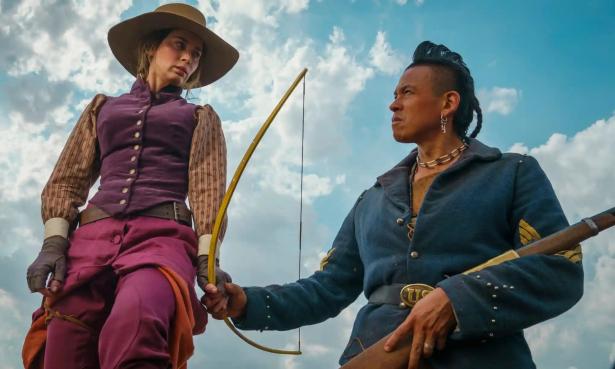 irst and foremost – don’t let the moony opening of The English (“It was in the stars … And we believed in the stars, you and I”) put you off. It is completely unrepresentative of the six hours that follow and I want you to follow them.

The English (BBC Two), written and directed by Hugo Blick, is a revisionist western further revised. We are in 1890, the last days of settlement of the old west and our all-but-silent hero is Eli Whipp (Chaske Spencer), a Pawnee native and former scout for the US army cavalry – doubly displaced by the settlers’ theft of his homeland and what his people see as his betrayal of it. He is on his way to Nebraska to stake a claim to the acres he is owed for his army service, despite warnings that the white men in charge will never honour their debt.

Our heroine is Lady Cornelia Locke (Emily Blunt), who arrives at a remote hostelry in Kansas from England, on the trail of the man she holds responsible for her son’s death. There she finds the manager, Mr Watts (Ciarán Hinds, in the most terrifying of all his terrifying modes), in the process of torturing Eli. She tries to buy his safety but is beaten for her trouble. It becomes clear that news of her vengeful intentions has gone before her and that Watts is under instructions to kill her. The murder will be pinned on Eli.

One semi-mutual rescue and at least four bloody deaths later, their fates – along with his quest and her revenge narrative – have become firmly intertwined. As they cross the plains in search of their different ideas of peace, the relationship between these two lost and harrowed souls becomes deeper and more tender in a way that avoids and transcends mere romance. By the end it is infused with yearning, that rare and vanishing sensation in a world where nothing is forbidden any longer, which helps give the series the edge of grandeur the genre always seeks.

The plot surrounding the emotional core is convoluted. I have faith that were I to map all its parts it would make perfect sense but I would genuinely need to sit down with a paper and pencil, and possibly a cartographer, to do so.

But it doesn’t really matter. What matters is that along the way we meet a plethora of picaresque characters (special mention to Nichola McAuliffe as the murderous Black Eyed Mog) who evoke the pitilessness of the old west and illustrate Blick’s consideration of how many of us would remain sane, and morally sound, in a lawless land where – for hundreds of miles at a time – no one could hear you, or anyone who got in your way, scream.

What matters is that the dehumanisation and massacres of the Native Americans, upon whose suffering the New World was built, is not forgotten but ever present, in Eli’s story, in the charred remains of encampments, in the cruelty of old soldiers they meet, in the stories of the people they seek shelter with. It’s not the wholesale corrective some will want, but you could say the frontier is being moved.

What matters is that although you might lose track of the details, the plot never becomes impenetrable or the performances less than compelling. Spencer, best known for playing the werewolf Sam Uley in the Twilight movies, is a revelation – strong and silent, but also seething with frustration, intelligence, grief and the rage of a good man forced into terrible compromises. Blunt is at her best yet, giving us a woman made brave and undauntable by resolve, powered by a secret whose late reveal ties much of what was beginning to feel like sprawl back tightly together again.

And then there’s Rafe Spall as David Melmont, with a performance just this side of demented, and quite perfect as a truly diabolic villain – the kind who can reach across the open plains to master the lesser fiends, the willing weak and the good men with no choice and cast the net around an approaching nemesis and bring her down.

Blick’s script is as spare and gorgeous as the landscape. If he could have spent some of the time afforded the plot machinations on interrogating more intensively the myths of the Old West, the colonial impulse, the difference between retribution and justice and the other questions his western raises, the ambition that is everywhere in it would have been even more gloriously realised. But it remains a sweepingly wonderful thing.