World Still ‘On Brink of Climate Catastrophe’ After Cop27 Deal 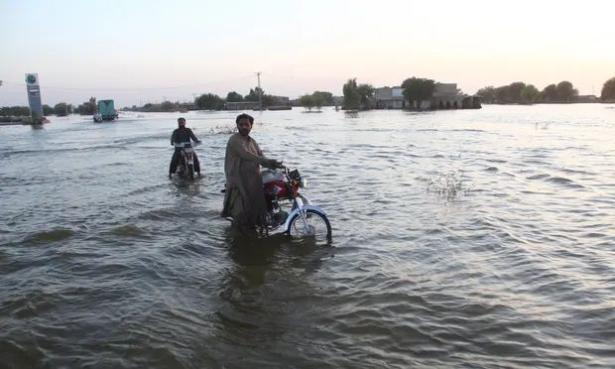 More than 33 million people in Pakistan have been affected by this year’s floods, according to the country’s climate change minister.,Nadeem Khawar/EPA

The world still stands “on the brink of climate catastrophe” after the deal reached at the Cop27 UN climate summit on Sunday, and the biggest economies must make fresh commitments to cut greenhouse gas emissions, climate experts and campaigners have warned.

The agreement reached in Sharm el-Sheikh early on Sunday morning, after a marathon final negotiating session that ran 40 hours beyond its deadline, was hailed for providing poor countries for the first time with financial assistance known as loss and damage. A fund will be set up by rich governments for the rescue and rebuilding of vulnerable areas stricken by climate disaster, a key demand of developing nations for the last 30 years of climate talks.

But the outcome was widely judged a failure on efforts to cut carbon dioxide, after oil-producing countries and high emitters weakened and removed key commitments on greenhouse gases and phasing out fossil fuels.

Mary Robinson, chair of the Elders Group of former world leaders, ex-president of Ireland and twice a UN climate envoy, said: “The world remains on the brink of climate catastrophe. Progress made on [cutting emissions] has been too slow. We are on the cusp of a clean energy world, but only if G20 leaders live up to their responsibilities, keep their word and strengthen their will. The onus is on them.”

António Guterres, secretary general of the UN, warned: “Our planet is still in the emergency room. We need to drastically reduce emissions now – and this is an issue this Cop did not address. The world still needs a giant leap on climate ambition.”

Oil-producing countries had thwarted attempts to strengthen the deal, said Laurence Tubiana, one of the architects of the 2015 Paris climate agreement, now chief executive of the European Climate Foundation. “The influence of the fossil fuel industry was found across the board,” she said. “This Cop has weakened requirements around countries making new and more ambitious commitments [on cutting emissions]. The text [of the deal] makes no mention of phasing out fossil fuels, and scant reference to the 1.5C target.”

She blamed the host country, Egypt, for allowing its regional alliances to sway the final decision, a claim hotly denied by the hosts. Next year’s conference of the parties under the UN Framework Convention on Climate Change (Cop) will take place in Dubai, hosted by the United Arab Emirates, one of the world’s biggest oil exporters.

Tubiana warned: “The Egyptian presidency produced a text that clearly protects oil and gas petro-states and the fossil fuel industries. This trend cannot continue in the UAE next year.”

At the talks, nearly 200 countries agreed that a fund for loss and damage, which would pay out to rescue and rebuild the physical and social infrastructure of countries ravaged by extreme weather events, should be set up within the next year.

However, there is no agreement yet on how much money should be paid in, by whom, and on what basis. A key aim for the EU at the talks was to ensure that countries classed as developing in 1992 when the UNFCCC was signed – and thus given no obligations to act on emissions or provide funds to help others – are considered potential donors. These could include China, Saudi Arabia and other Gulf states, and Russia.

Under the final agreement, such countries can contribute on a voluntary basis.

John Kerry, the US special presidential envoy for climate, who tested positive for Covid on Friday night and spent the rest of the summit self-isolating in his hotel, fixed China in his sights in a statement after the conference concluded.

“Reducing emissions in time is about maths, not ideology. That’s why all nations have a stake in the choices China makes in this critical decade,” he said. China is the world’s biggest emitter of greenhouse gases, as well as the world’s second biggest economy, and comes second only to the US in cumulative historical emissions since the industrial revolution.

“The US and China should be able to accelerate progress together, not only for our sake, but for future generations. And we are all hopeful that China will live up to its global responsibility.”

Paul Bledsoe, a former Clinton White House climate adviser, now with the Progressive Policy Institute in Washington DC, said: “It’s time for the US to work with developing nations to put pressure on China, or climate protection will become impossible. China should be a climate outcast, along with Russia.”

Several key commitments championed by the UK, which hosted last year’s Cop26 climate summit in Glasgow, were dropped from the final deal, at the behest mainly of Saudi Arabia and other petro-states, though the Guardian understands that China, Russia and Brazil also played a role in weakening some aspects.

These included a target for global emissions to peak by 2025, in line with the goal of limiting temperature rises to 1.5C above pre-industrial levels, the threshold of safety that was the focus of the Glasgow Climate Pact signed last year at Cop26.

Although the final text did include the commitment to limiting temperature rises to 1.5C, the language was regarded as weak and marking no progress on the outcome of Cop26 a year ago.

Alok Sharma, the UK’s Cop26 president, sacked as a minister by Rishi Sunak, was visibly angry at the close of the conference. “Those of us who came to Egypt to keep 1.5C alive, and to respect what every single one of us agreed to in Glasgow, have had to fight relentlessly to hold the line. We have had to battle to build on one of the key achievements of Glasgow, the call on parties to revisit and strengthen their [national plans on emissions].”

Sharma listed commitments weakened or lost, hitting the table for emphasis: “We joined with many parties to propose a number of measures that would have contributed to this. Emissions peaking before 2025, as the science tells us is necessary. Not in this text. Clear follow-through on the phase down of coal. Not in this text. A commitment to phase out all fossil fuels. Not in this text. And the energy text, weakened in the final minutes [to endorse “low-emissions energy”, which can be interpreted as a reference to gas].”

In the end the responsibility will lie with everyone, as Meena Raman of Third World Network, an adviser to developing countries, points out. “Since the EU and Alok Sharma are disappointed that fossil fuel phase-out is not in the text, we would like them to take leadership and revise their NDCs [nationally determined contributions] and put into plans their fossil fuel phase-out urgently and stop expansion of fossil fuels including oil and gas. [It’s] not enough to play to the gallery but act if they really want to save the planet and not hide behind 2050 net zero targets, which will bust the remaining carbon budget for 1.5C.”

Sharma concluded: “I said in Glasgow that the pulse of 1.5C was weak. Unfortunately, it remains on life support.”

There can be no more hiding, and no more denying. Global heating is supercharging extreme weather at an astonishing speed. Guardian analysis recently revealed how human-caused climate breakdown is accelerating the toll of extreme weather across the planet. People across the world are losing their lives and livelihoods due to more deadly and more frequent heatwaves, floods, wildfires and droughts triggered by the climate crisis.

At the Guardian, we will not stop giving this life-altering issue the urgency and attention it demands. We have a huge global team of climate writers around the world and have recently appointed an extreme weather correspondent.

Our editorial independence means we are free to write and publish journalism which prioritises the crisis. We can highlight the climate policy successes and failings of those who lead us in these challenging times. We have no shareholders and no billionaire owner, just the determination and passion to deliver high-impact global reporting, free from commercial or political influence.

Whether you give a little or a lot, your funding will power our reporting for the years to come. Support the Guardian from as little as $1 – it only takes a minute. If you can, please consider supporting us with a regular amount each month. Thank you.