We held a massive pacifist rally for a diplomatic solution in Europe, where warmongering rages among the ruling classes. With radical rightists in government and a dismal centre-left, it is a movement to prevent catastrophe and give us back dignity. 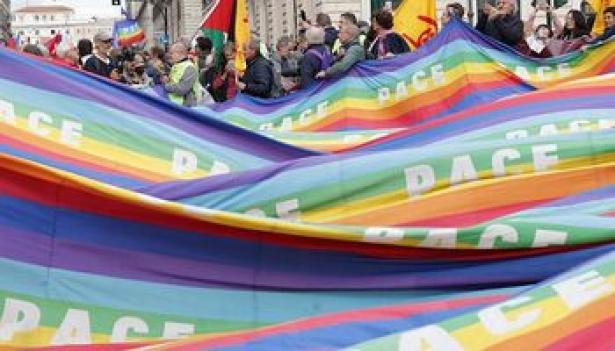 On 5 November, a protest march organised by trade unions, left movements, Catholic groups, and other civil society actors took place in Rome. The giant demonstration for peace with more than a hundred thousand people is an event of enormous importance.

This act of protest is significant not only for Italy, where an enormous popular reaction is emerging in the face of a far-right government and a defeated, divided, and discredited centre-left government, but also for Europe, where the European Commission and governments have failed in their role as mediators in the Russia-Ukraine war and have submitted to NATO, with the ambition to assume a military leadership role alongside the USA.

The social composition of the rally

The demonstration in Rome had a diverse social composition around the idea that the key point is to insist on what the powerful, Putin and NATO in the first place, do not want, that is, a ceasefire and negotiations.

Negotiations that, as a document signed by many prestigious former diplomats, would start from a negotiating table and lead to a ceasefire, that provides for troop withdrawal, and an end to sanctions, a peace and security conference for the area, letting the populations of the Donbass decide on their own future. All this under the supervision of the UN.

The platform for the demonstration was broad but resolute on the issue of peace, ceasefire, and dialogue.

Parliamentary positions on the war

For those used to the classic parliamentary bipolarity of government/opposition it is not easy to understand how the how the parliamentary groups are articulating their positions.

If we look at the measures adopted up to now in parliament, all parties, excluding the parliamentarians of the left (Manifesta and Sinistra Italiana) have voted to send weapons and support the war in Ukraine. Even the 5-Star Movement, which also took part in the demonstration, has done so repeatedly, not to mention the PD (Democratic Party) which has set itself up as the standard-bearer of European warfare and today is trying to compromise between war and peace.

In the opposition camp, the most determined support for the war comes from the new centrist liveralist group, Azione, formed by the former secretary of the PD and now leader of Italia Viva, Matteo Renzi, and Carlo Calenda.

The idea of a counter-demonstration in Milan for victory in Ukraine came from Renzi and Calenda – which turned out to be a fiasco with a few hundred people. The PD’s postion was embarrassing and lacked any credibility, as it was present in both demonstrations.

The right-wing representatives stayed home. But behind their ultra-Atlanticism that defends North American power, their ongoing contradictions continue, occasionally coming to the surface due to the ‘friendly’ relations that both Berlusconi (Forza Italia) and Salvini (Lega Nord) have, in the past, maintained with Putin.

Voices from the streets

The political narrative of the mass media on the day of 5 November is more absurd and annoying than anything else. Attempts are made to attribute the mobilisation to this or that political figure.

The big demo in Rome was not the property of M5S leader and former Prime Minister Giuseppe Conte, who at least had the merit of immediately announcing his participation. Much less was it the demo of Enrico Letta, PD secretary and former Prime Minister, who, contested as he tried to participate, appeared pathetic. Nor even can the demo be credited to those who, like Unione Popolare, have always been against the war and arms shipments from the beginning. Nor can it be claimed by those who, in a joint list with the Greens who at the European level are among the biggest supporters of the war in Ukraine are trying to maintain Sinistra Italiana’s and Italian Greens’ pacifist position. If anything, Pope Francis can rightly claim some credit – there were many associations of the Catholic world present in the streets.

But "the street" belonged mainly to the movements that sought and built the demo, drawing on a precious heritage that comes from afar and can still save us, tapping into a popular sentiment that still today, despite a relentless propaganda campaign, sees over 60% of Italian citizens opposed to sending weapons and increasing military spending.

It was a manifestation that demanded an end to war through negotiations, a protest against those who still rely on arms and armed confrontation as a solution to international conflicts, a demonstration by those who demand that ‘war be banished from history’ in a Europe that stretches from the Atlantic to the Urals. They demanded social justice and opposed the misappropriation of economic resources for military spending, with the sloagan ‘weapons down, wages up’, chanted by ordinary people who have always known that in war there are those who die (the poor) and those who make money (the arms dealers). The demonstrators were equally against Putin, NATO, and all those who dominate by military means – and for all those who suffer from war and injustice - Ukrainians, Russians, Palestinians, Kurds, and Cubans.

On 5 November, we took back the political space in Italy that for decades had served the Italian cause for decades. We held the largest pacifist rally for a diplomatic solution in all of Europe, where the most inane warmongering rages among the self-proclaimed ruling classes. In a country with radical rightists in government and a dismal centre-left, it is the re-emergence of that movement which from Comiso to Genoa, from Yugoslavia to Iraq, Afghanistan, and Ukraine, has tried and is still trying to prevent a catastrophe and to give us back our dignity.

Roberto Morea is member of transform!italia and member of the transform! europe Managing Board. He is a long-time Italian activist in the world of the Commons. From 2007 to 2008 he worked as a Councillor for Social Services in the first municipality of Rome. In 2014, he was among the promoters of the European list L‘Altra Europa con Tsipras.

Roberto Musacchio is an Italian politician and former Member of the European Parliament (Partito della Rifondazione Comunista, PRC) and of its Committee on Employment and Social Affairs and Committee on the Environment, Public Health and Food Safety, and Vice-Chair of the Temporary Committee on Climate Change.

transform! europe is a network of 39 European organisations from 23 countries, active in the field of political education and critical scientific analysis, and is the recognised political foundation corresponding to the Party of the European Left (EL).

This cooperative project of independent non-profit organisations, institutes, foundations, and individuals intends to use its work in contributing to peaceful relations among peoples and a transformation of the present world.