The post-neoliberal world could move in a neo-authoritarian, elitist, anti-democratic direction. Or it could be a communitarian, multiracial democracy. For the second option prevails, labor must help forge a new order that lifts all working people. 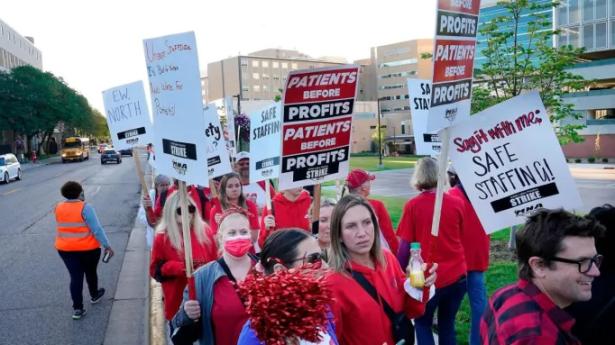 In my thirty years in the labor movement, I’ve never seen a moment quite like this one. We’re living through a pivotal moment for America’s working class and for the future of U.S. labor, but it’s more than that. This is a major shift in the social and economic order.

In order to see the path forward, we have to consider what’s different from the system we’ve operated in for the last 40 years. The last time we saw such a shift began in the 1970s, when markets-are-always-right thinking eclipsed New Deal ideas that prioritized checks and balances on capital.

Now market-centric neoliberal thinking is weakening.  The pandemic is key. There’s far more public awareness about how poorly workers have been treated, and this has driven up public support for unionism. A full 71 percent approve of unions, according to recent Gallup polling, which is the highest level since 1965. Gen Z is the most pro-union generation alive, according to a new analysis by the Center for American Progress.  Gen Zers are more supportive of unions than were Boomers, GenXers or Millennials at the same age.

Yet the shift we’re living through together actually started before the pandemic with the Great Recession of 2008-09 when new, diverse movements began to challenge the status quo. The Occupy Movement of 2011 united people under the banner of “We are the 99%.”  The Black Lives Matter movement in 2013, the #metoo movement in 2017, and the Day Without an Immigrant in 2017 all laid bare the hollow promise of a neoliberal system in which “equity” merely meant equal access to the market, not fundamental reform.

Even before the pandemic, labor activity increased to new levels. There were more people on strike in 2018 and 2019—half a million a year—than in any year in the previous thirty.  The #RedforEd strikes brought out teachers in a host of conservative-leaning states, and unlike in the 1970s and 1980s, they enjoyed enormous public support for their walkouts.  Fight for $15 effectively raised minimum wages in many cities and states.

People no longer believe the “Washington consensus” that prioritized unfettered corporate access to global markets, no matter the cost to workers and communities. Our lived reality has revealed the false promises of neoliberalism. Wildfires, floods and heat waves all make us see the climate crisis and the need for structural reform. Workers are pushing back against the kinds of bad jobs that have become the norm over the last 40 years.

Yet the erosion of the neoliberal order isn’t a guaranteed win for workers. Rather, the shift has helped spark a global political backlash, including the election of Donald Trump in 2016, the UK’s Brexit, and other right-wing, populist fronts that threaten the advance of democratic ideals.  Though Democrats squeaked out the Senate in this most recent election, ultra right-wing voices remained a potent force.

The post-neoliberal world could move in a direction that is neo-authoritarian and that is fundamentally elitist and anti-democratic.  Or it could be a turn to a communitarian, multiracial democracy that is based in the common good.  In order for labor to help ensure that the second option prevails, we must help forge a new order that lifts all working people.

New Deal-era labor law and collective bargaining can be part of the solution, but they are not sufficient to handle today’s challenges alone. That’s in part because employers have so irreparably broken the U.S. system for forming unions that it is extremely difficult for workers to jump over all the hurdles it takes to win a union and enter into a collective bargaining agreement. Too many working people are getting left behind, and that leaves lots of room for anger and hatred to prevail.

Consider that America’s workplaces remain among the least democratic spaces in the developed world.  The only protection for workers in these undemocratic spaces is that hard-to-get union contract.  Worker organizations can lean into this moment by leading the fight to democratize all the nation’s workplaces, unionized or not.

What would happen if the labor movement fought for just cause employment for all workers, for example? The US remains the only nation in Western world where private sector workers can be fired without just cause. People think they have a right to their job, but in fact they do not, unless they have a labor contract.  Some workers are challenging at-will employment. Parking lot workers in Philadelphia won the right to fight unfair firings when the city council adopted a just cause law for their sector in 2019. New York City approved similar protections for fast-food employees in 2020, provisions that were recently upheld in Federal Court. These wins could be replicated in other cities and sectors.

It could be time to think about how to bring democracy to all workers in other ways, such as beginning to push for workers’ councils, like in Germany. What about increased rights for union representation on the job even when the union does not yet represent a majority of the workers? We can envision a new system that offers workers many doors to enter many kinds of worker organizations.

A strong and vibrant labor movement of 2040 will look very different from a strong and vibrant labor movement of 1940.  We need new laws, new structures, and new approaches in order to help direct the nation toward a broad-based economic and social equity, as the nation finally pivots away from neoliberalism.  Labor has young people on its side and the public’s good will.  We can seize this new moment, but only if we meet it on its own terms.

Lane Windham, Ph.D., is the Associate Director of the Kalmanovitz Initiative for Labor and the Working Poor at Georgetown University and author of Knocking on Labor’s Door: Union Organizing in the 1970s and the Roots of a New Economic Divide. She is also co-director of WILL Empower.