Free transit or fixing the system? 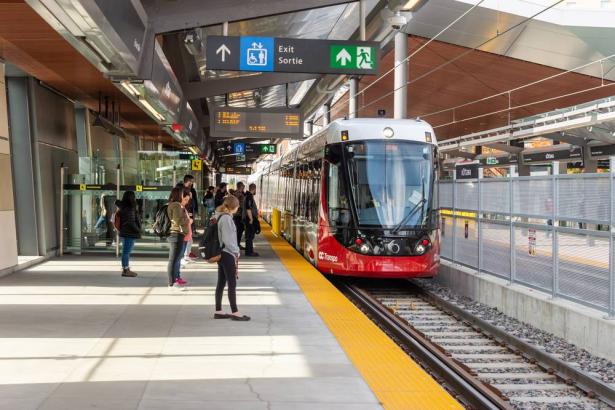 An OC Transpo Train arrives at the uOttawa station. Free Transit Ottawa has been organizing since 2020, bringing together transit users and workers, union members, students, and climate activists. ,Depositphotos

Ottawa’s light-rail transit system has made headlines in the last years — but not for any good reasons. Trains don’t work in the cold. There are frequent delays caused by technical problems. And a derailment once led to all the trains being taken out of service for weeks. On top of all of this, Ottawa’s city council voted to increase fares.

But as these events unfolded, a grassroots group was beginning to fight for better transit. Free Transit Ottawa (FTO) had its first meeting in February 2020, bringing together transit users and workers, union members, students, and climate activists. Their goal, at the time, was to get people to sign a petition supporting both free transit and adding members of the public to the board of the OC Transpo transit agency.

That’s when COVID-19 hit. “That really created a significant pivot,” said Joshua McEvoy, an organizer with FTO. Suddenly they had to start thinking of creative ways to both reduce barriers to transit and improve it in Ottawa, all while dealing with a global pandemic that slashed ridership numbers almost to zero.

But what they accomplished offers interesting lessons for folks trying to build strong movements to improve transit in their own communities.

The case for free transit

The free transit movement exists in various forms across the country, including Vancouver, Toronto, Ottawa, and Montreal.

Free transit is a deceptively simple cause to advocate for, because on its face, it’s a simple request: let people ride the train/bus/LRT for free.

At the launch of the campaign for Free Transit Edmonton.

But according to Stefan Kipfer, an organizer with Free Transit Toronto, it’s complicated by whether government funding for transit is already robust in your jurisdiction.

In France, for example, there is a payroll tax for companies because they benefit from transit — it gets their workers to where they need to do their jobs. Since many regions already had well-funded transit, they could shift easily to making that transit free without impacting their ability to provide services. In Dunkirk, transit fares were eliminated in 2018. This increased the number of passengers by 60 per cent during the week. Many residents said they no longer used cars.

But many of the largest Canadian cities rely on the fare box to fund transit services. Sixty per cent of the Toronto Transit Commission’s operating budget comes from fares. “Given existing austerity and the unwillingness of the province to fund operating expenditures as it used to, free transit as a short-term demand can't succeed unless you change the parameters,” says Kipfer.

Who does free transit help? If transit systems are designed so that they are only moving people from the suburbs to downtown cores, or into shopping areas, it’s unlikely that those who need it most — low-income residents — will truly reap the benefits.

Kipfer notes that Denver has some free transit lines. (The city has also experimented with eliminating all fares, though only for limited periods of time.) However, those lines were designed to shuttle commuters between downtown and the suburbs. Many people need transit to do more for them, including helping them get groceries, go to school, and to medical appointments.

So free transit is the simplest ask because it means making a change without having to necessarily change the quality of service. But longtime transit advocate Steve Munro says free fares can be a distraction from improving transit. “It’s rather like a store having a big sign in the window, ‘SALE TODAY,’ and a few mouldy loaves of bread on display.” He questions what the point of free fares would be if the service levels don’t adequately serve citizens.

Kipfer says it’s about looking at the long term. “How do we reorganize public finance for transit in general?”

One of the biggest reasons people support free transit is its potential to take cars off the road, thus decreasing greenhouse gas emissions. However, some experts say there would be no significant impact unless transit routes improve to the point that it becomes a viable option for even the most wealthy to ditch their cars. “If you take bad American transit that costs $1.50 and make that bad service free, that won’t move the needle enough to make a climate impact,” David Bragdon, executive director of the Transit Centre, told Bloomberg earlier this year.

The pandemic created major hurdles for most free-transit campaigns. Suddenly, the question was whether regional systems would simply survive months of essentially non-existent ridership. (Kipfer says Toronto’s organization went, for all purposes, dormant and hasn’t fully recovered the momentum it had before the pandemic.)

In Ottawa, McEvoy and his fellow organizers started thinking about what else they could do as a campaign. The first idea was to look for allies. As their launch event suggested, transit intersects with many issues. Environmentalists support it because it can help to halt climate change. Anti-poverty activists support it because it improves quality of life for low-income people. Urbanists like that it pushes people towards more walkable and active cities.

In light of this, Free Transit Ottawa reworked its petition to include six demands that, if enacted, could have an immediate beneficial impact for some of the city’s most at-risk people. Those included making transit free for Ontario Disability Support Program recipients and adding 40 Para Transpo buses.

In the run-up to the 2022 municipal election, Free Transit Ottawa got a number of candidates to pledge to support these petition items; some of them won. “We hope to see some movement around that,” says McEvoy.

They also started reaching out to unions. It’s not uncommon that free parking passes are included in collective agreements — why not include transit passes? This would not be unprecedented. Across Canada and the United States, postsecondary student unions provide free or reduced-rate passes to members. (They buy them in bulk, and so get them at a lower price.)

“[Free transit] is rather like a store having a big sign in the window, ‘SALE TODAY,’ and a few mouldy loaves of bread on display.”

Free Transit Ottawa started conducting surveys in conjunction with the members of some union locals in Ottawa. What they found was that it was a big expense for many of them. “If transit did work for people and it was affordable and ideally free, that would actually be an economic boon to a lot of people,” says McEvoy. It’s another idea that, while it hasn’t happened yet, is now on the radar for unions when contract negotiations come up.

It’s an incremental approach that has worked in other jurisdictions. In Victoria and Toronto, for example, kids under 12 ride transit for free. In Brampton, seniors don’t have to pay fares.

Free Transit Ottawa, of course, isn’t the only group advocating for better transit. There’s an Edmonton version of the organization as well, working towards similar goals. And in Toronto, TTCriders has taken up much of what Free Transit Toronto was advocating for.

McEvoy says Free Transit Ottawa’s growth and ability to make change will depend on bringing more community members into the fold. McEvoy admits that it is still a work in progress. But it’s one way that all groups working towards free transit can start to envision a future in which we’re less reliant on cars.

This is part two in a series of Solutions Journalism stories, produced in partnership with Journalists For Human Rights. Each article is examining how collective action can bring meaningful change to some of our biggest problems. Read part one here.