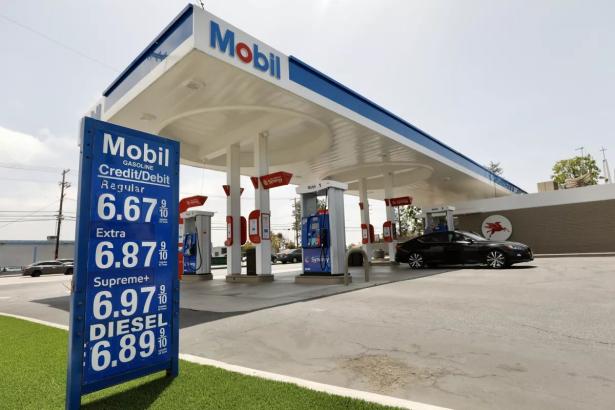 Gas prices soared earlier this year, hitting California especially hard. But prices have fallen steeply recently and are expected to end up as low as $4 a gallon soon.,Al Seib / For The Times

Do Americans understand what is happening with inflation in this country? This is an important question, because the public’s perception can influence national policy and political choices. Before the midterm elections one month ago, 87% of likely voters told pollsters that inflation was extremely or very important in deciding their vote.

Let’s take a simple example of what most Americans see most in the news, and compare this with the data that economists, and journalists who cover the U.S. economy, are looking at.

This week our government released the November data for the Consumer Price Index, and the headline number was 7.1%; which was down from 7.7% last month, but still a very high rate of inflation for the United States. The phrase, “highest levels since the early 1980s” has accompanied much of the reporting for the last few months.

But these numbers are, in some very important ways, out of date.

It’s true that prices as measured by the Consumer Price Index (CPI-U) in November of this year were 7.1% higher than a year earlier.

But if we look at the five months that we have just experienced (July through November), the bigger news is really how much the rate of inflation has been coming down.

By contrast, the annualized inflation of the five months prior to July (February through June) was 11.8%.

Although the Fed’s target is 2% (the Fed uses a different measure of inflation than the CPI but pretty close to it), most economists would not be worried about inflation of 2.5%. In fact some of the world’s most prominent economists would favor 3%, over 2%, as a target.

There is a long list of facts and issues known to economists that have led many of us to less alarmist views than those of the wider public, including some politicians. For starters: The spike in inflation over the last 18 months was primarily a result of external shocks: The war in Ukraine was a big one, especially for gasoline prices.

Gasoline prices have been an even bigger issue in California than in most of the country, because they are substantially higher in the state, where they have recently fallen from a record $6.49 per gallon in October to $4.61 this week.

Inflation was also driven higher by supply chain disruptions, and large shifts in demand because of the pandemic and then recovery.

There has been little evidence of any self-reinforcing mechanisms such as a wage-price spiral (where prices cause workers to demand higher wages, further driving up prices) or accelerating changes in the expectations of consumers or investors.

The data also show that, despite the hardships inflation has caused for many people, tens of millions of Americans are economically better off than they were before the change of government two years ago. This is especially true for people who gained employment from the record 10 million jobs that have been created since then. Wages for lower-paid workers rose faster than inflation; workers in the hotel and restaurant sector (production and nonsupervisory) saw their wages rise by 3.8% more than inflation since the pandemic began.

And importantly, over the last five months, wages for all production and non-supervisory workers have risen at a 4.1% annualized rate.

The misunderstanding of inflation and the economy distorts American politics and can influence not only elections but also the most important economic policy decisions that our government makes. The Federal Reserve itself has caused most of the U.S. recessions since World War II by raising interest rates, and it may well be on track to do that again in the coming months, potentially throwing millions of people out of work. This would also probably have serious political consequences.

Such a tragic mistake would be much less likely if the public — including members of Congress and other decision-makers — had a better understanding of the economic reality of the current episode of inflation, as well as the available choices and consequences. The way inflation is looking these past five months, the Fed should take a break from its interest rate hikes before, rather than after, it causes the next recession. That would be a much better choice than the course it is on.

Reposted with permission of the author

Mark Weisbrot is co-director of the Center for Economic and Policy Research in Washington and the author of “Failed: What the ‘Experts’ Got Wrong About the Global Economy.”