film What Noah Baumbach’s White Noise Is Really About 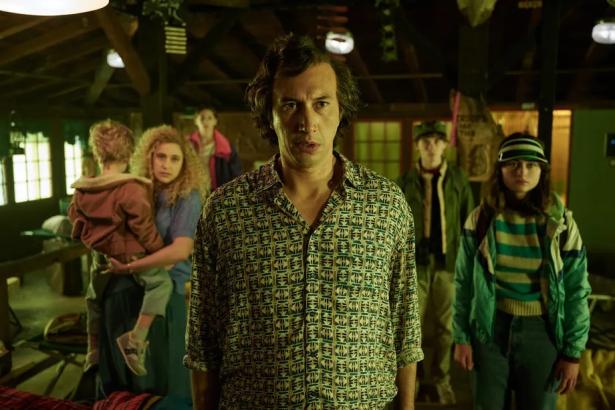 Alissa Wilkinson covers film and culture for Vox. Alissa is a member of the New York Film Critics Circle and the National Society of Film Critics.

There’s a white noise machine in my bedroom. I got it to block the sounds of traffic from the busy avenue outside my window, but years ago we moved our bedroom to the back of the apartment. Now technically unnecessary, the white noise machine still goes on every night. I’ve downloaded two different apps on my phone to simulate the sound when I travel. That staticky low hum is imperative; I can’t sleep without it.

I hate depending on a machine for my basic survival, but without it I’ll stare at the ceiling for hours, contemplating my existence, and I guess that’s sort of Don DeLillo’s point in White Noise. The 1985 novel is a classic of postmodern fiction, long considered “unadaptable” for reasons that become more clear when you read it. It’s a funny novel that keeps shapeshifting, making the reader feel the friction between lives dominated by consumerism and consumption and technology on the one hand, and the weight of mortality on the other.

Noah Baumbach’s new film adaptation of the novel is a valiant attempt to capture DeLillo’s book, but the result is a movie so faithful to the original work that it comes very close to not working. It’s 1984 and Jack Gladney (Adam Driver) is a middle-aged college professor and head of the Hitler Studies department, which he created. He lives with his wife Babette (Greta Gerwig) in a rambling old house full of their children, mostly from previous marriages. His courses in Hitler Studies — like a seminar, for instance, that examines his speeches — are wildly popular, and his colleague Murray Siskind (Don Cheadle) wants Jack’s help in creating a parallel Elvis Studies department. But everything gets weirdly upended when a toxic cloud suddenly forms on the horizon, which the news calls the “airborne toxic event.”

People can, and do, write lengthy peer-reviewed papers and dissertations on White Noise, because it is not really just a story, though it’s plenty entertaining on the surface. It’s actually kind of amazing what DeLillo managed to pack into the novel. For instance: Hitler Studies? What a strange and largely unremarked-upon choice — but the movie and the novel treat this as if it’s a totally normal sort of academic department to found.

Or what about all of these lists and litanies of brands that pop up repeatedly? In the film, this translates into many scenes in a brightly colored supermarket with prominently displayed, period-appropriate products, laundry detergents and milk and particular types of gum. In the novel, we get periodic bursts in the text that become weirdly specific little lists. Following a musing on how much he loves Babette, Jack suddenly interjects, “The Airport Marriott, the Downtown Travelodge, the Sheraton Inn and Conference Center.”

Or what about the ever-present televisions? They’re everywhere in White Noise, set in an era when the internet hadn’t yet blanketed the world. “I’ve come to understand that the medium is a primal force in the American home,” Siskind tells Jack. “Sealed-off, timeless, self-contained, self-referring. It’s like a myth being born right there in our living room, like something we know in a dreamlike and preconscious way.” On Friday nights, Jack and his family gather in front of the TV set not to watch movies or sitcoms, but to watch disasters happen on the news — “floods, earthquakes, mud slides, erupting volcanoes.” They’re transfixed, because “every disaster made us wish for more, for something bigger, grander, more sweeping.”

A colleague later tells Jack that this is because “we’re suffering from brain fade. We need an occasional catastrophe to break up the incessant bombardment of information.” Reading or hearing that in 2022, in an age of constant manufactured outrage, it seems almost too prescient.

Other strange things happen throughout the novel, some of which pop up in the movie, too. Jack can’t really believe that a disaster would happen to him because he is a well-off college professor, not the kind of person to whom disasters happen — which is to say, a person on TV. The distance the TV has put between him and reality has seeped into his existence.

And yet, the frightening airborne toxic disaster ends rather abruptly; DeLillo (and Baumbach) give us the comical and disorienting experience of jumping right back into reality, Murray and Jack strolling through the grocery store again. As if “reality” — even reality as overwhelming as a toxic airborne cloud or, say, a pandemic — can’t impinge too long on the white noise.

This bleed between what’s on TV and what’s real is part of the fabric of the novel. Jack frequently muses on misinformation and disinformation (“the family is the cradle of the world’s misinformation,” he says at one point) — something that comes from the human brain’s inability to process everything flying at it, and our need to make sense of it with conspiracy theories. Characters suddenly start talking strangely, and you realize they’ve slipped into the cadence of a sitcom or a thriller. A group of college professors insults one another over their pop culture knowledge, which starts to make sense when you remember that pop culture is the lingua franca of modern life, the thing that feels more real than our own lives, the shared experience between us.

ALL OF THIS WHITE NOISE WE’VE GENERATED FOR OURSELVES — A DRIVE TO BUY THINGS, A FASCINATION WITH CATASTROPHES, TECHNOLOGIES ALWAYS HUMMING IN THE BACKGROUND — IS A WAY OF DISTRACTING OURSELVES FROM THE HORRIFYING REALIZATION THAT WE WILL DIE

For the movie adaptation, Baumbach strips out a lot of the theoretical underpinnings of the novel, though they’re still there if you’re looking for them. He instead focuses on the larger existential point at the heart of the novel: that all of this white noise we’ve generated for ourselves — a drive to buy things, a fascination with catastrophes, technologies always humming in the background — is a way of distracting ourselves from the horrifying realization that we will die. Actual disasters bring us into confrontation with that inevitability, but we try to push them away as fast as we can. It’s why people become obsessed with celebrities (like Elvis) or leaders who falsely promise us the world (like Hitler); in becoming part of a crowd, in losing ourselves to the emotional high of the performer, we can stop the feeling for a while.

Frankly, this choice on Baumbach’s part is a little bit of a disappointment. Moving a story that’s about screens to the screen practically begs for some formal inventiveness, some way to not just make the audience watch the story unfold but feel it, to experience what the characters are experiencing, which could, in turn, enhance the emotional impact.

But it is, after all, a very talky and theoretical novel. And perhaps a faithful adaptation is all we can ask for, though it loses some of the humor and bizarreness of the source material thereby.

One omission, though, made me especially sad, because the key to White Noise lies in an indelible early scene in the novel. Murray brings Jack to a local tourist attraction that he wants to see, and that Jack has never gotten around to seeing. It’s called “the most photographed barn in America,” and they start seeing signs for it long before they get there. When they arrive, there are “forty cars and a tour bus” in the lot, and a lot of people standing nearby with photographic gear, taking pictures of the barn.

“No one sees the barn,” Murray tells Jack. “Once you’ve seen the signs about the barn, it becomes impossible to see the barn.” He paints it in almost religious terms: “Being here is kind of a spiritual surrender. We see only what the others see. The thousands who were here in the past, those who will come in the future. We’ve agreed to be part of a collective perception. This literally colors our vision. A religious experience in a way, like all tourism.”

Murray’s idea, this somewhat absurdist idea of a “most photographed barn” that’s remarkable simply for being remarkable, snaps the whole of White Noise into focus. There’s not too much difference between the tourists traveling to photograph an unremarkable barn and the ways we all snap pictures of things that have been photographed a million billion times: the Eiffel Tower, the Statue of Liberty, the Golden Gate Bridge, whatever. Why do we do it? Because we’ve seen pictures of it, and want to prove that we were there too. “There,” not just in Paris or New York or San Francisco, but in the world. We want for a second to break our mediated reality and put down a marker. A photo is a way to stake a claim on reality, to put a frame around existence: We were here. We lived. We mattered.

And someday we won’t be here, but nobody wants to think about that right now.

At the end of the novel, and of the movie, Jack is in line at the grocery store again, watching people going about their business, looking through the rich array of consumer products. “Everything we need that is not food or love is here in the tabloid racks,” he concludes. “The tales of the supernatural and the extraterrestrial. The miracle vitamins, the cures for cancer, the remedies for obesity. The cults of the famous and the dead.”

White Noise is about the barriers between us and reality that we’ve built to distract ourselves from our own mortality. But like the white noise machine I need to sleep, even though there’s nothing to drown out anymore, we’ve become so dependent on our cultural white noise that the idea of living without it is almost unbearable. Call it the human condition or whatever you want: It’s how we deal with the ways we all stare at the ceiling, contemplating existence, hoping we will have meant something, in the end.

White Noise is streaming on Netflix.