King understood that no single approach would be sufficient to combat the interconnected evils of racism, economic exploitation and militarism. 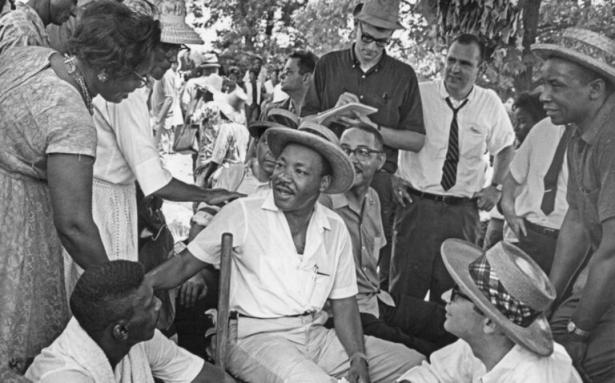 On the heels of the second anniversary of the Jan. 6 assault on U.S. democracy and an eerily similar attack in Brazil, we celebrate the life and legacy of Martin Luther King Jr., who helped lead the greatest pro-democracy movement in U.S. history, otherwise known as the civil rights movement. He understood that no single approach would be sufficient to combat the interconnected evils of racism, economic exploitation and militarism.

“Anyone who starts out with the conviction that the road to racial justice is only one lane wide will inevitably create a traffic jam and make the journey infinitely longer,” he wrote in “Stride Towards Freedom,” his book about the Montgomery bus boycott, one of the best organized and most successful campaigns of the civil rights movement.

King believed in the power of listening and dialogue to humanize, educate, persuade and build alliances across differences. At the same time, he understood that only by shifting power dynamics and raising the costs of violent extremism and institutional racism — through petitions, boycotts, walk-outs, sit-ins, strikes and countless other forms of protest and noncooperation — would harmful practices come to an end. Working for change within institutions like courts and legislatures required mobilizing pressure and changing incentives from outside those institutions.

Multiple approaches were necessary to educate people about the injustices of Jim Crow segregation, to raise the social, political and economic costs of maintaining the status quo, and to build the broad-based coalitions needed to change laws and policies. At the time, King’s embrace of boycotts, strikes and other forms of nonviolent direct action to challenge segregation policies in the South was criticized by white clergy and others, who insisted that he reject confrontational tactics in favor of dialogue. For King, both approaches were necessary. As he wrote in the Letter from a Birmingham Jail: “Nonviolent direct action seeks to create such a crisis and foster such a tension that a community which has constantly refused to negotiate is forced to confront the issue. It seeks so to dramatize the issue that it can no longer be ignored.”

King’s strategic insights remain relevant today. Whereas Jim Crow was a single-party authoritarian system anchored in the Democratic Party and bolstered by churches, courts, media, the Ku Klux Klan and other institutions, today’s authoritarian ecosystem has evolved. Now the Republican Party has been captured by an extremist faction that embraces lies, conspiracies and violence — culminating in a violent attempt to overthrow the government. That party now holds the reins of power in 27 states (covering 53 percent of the population) and one body of Congress.

Meanwhile, Evangelical and Catholic churches and leaders have provided moral and material scaffolding for MAGA extremism; corporations and financiers have funded it; media outlets have amplified lies and conspiracies; and veterans’ groups infiltrated by white nationalists have filled the ranks of the Proud Boys, Oath Keepers and QAnon. Dismantling this interconnected web of support for authoritarianism in the U.S., in turn, requires a systemic response involving many diverse actors employing different strategies and approaches.

There is no time for despair. Today, like earlier, multiple approaches are needed to combat racism and white nationalism and to build a multiracial democracy grounded in love and justice. Those approaches include dialogue and direct action, inside and outside strategies, working within and across groups and movements to build alignment around the rejection of conspiracies, political violence and election subversion — and around a reimagining of U.S. democracy grounded in abundance, courage and universal flourishing.

Many organizations across the country are experimenting with different approaches to bringing various constituencies into a pro-democracy movement — not based on party identity but grounded in a shared willingness to build stronger communities free from violence and extremism. There are plenty of onramps to pro-democracy work if we are open enough to welcome in a broad cross-section of actors.

People’s Action, Showing Up for Racial Justice, United Vision for Idaho, the Rural Digital Youth Resiliency Project, and RuralOrganizing.org are pioneering ways to organize across race and class, particularly in rural areas. The One America Movement, Sojourners, NETWORK, and the Georgetown Initiative on Catholic Social Thought and Public Life and Faith for Black Lives are leading engagement strategies with Christian communities. The Secure Families Initiative and the Mission Continues are doing important work with veterans, while the Western States Center is conducting critical analysis and organizing to counter white supremacist violence. Leadership Now, Civic Alliance and local organizations like the Wisconsin Business Leaders for Democracy are galvanizing the business community around democratic norms and practices.

Alongside this important engagement work, other groups are turning to the courts and other forms of pressure to raise the costs of anti-democratic behaviors. Groups like Protect Democracy and the Brennan Center, for example, have helped prepare hundreds of legal cases to hold individuals responsible for spreading dangerous conspiracies and violence accountable in the courts.

Making political violence and anti-democratic behaviors backfire requires building the capacities to go on the offense with our movements, something this paper helpfully describes. Finding the levers of influence to make it more costly for politicians and other actors to engage in anti-democratic behaviors takes solid analyses of where their social, political, spiritual and financial support comes from. And, in turn, linking that analysis to campaigns that target those sources of power with tactics of pressure and engagement.

During the civil rights movement, the Montgomery bus boycott and the Nashville lunch counter sit-ins were excellent examples of campaigns that linked economic analysis (of revenue streams for white-owned businesses upholding segregation) to campaigns that relied on tactics of non-cooperation. Both campaigns involved significant training and preparation, including (how to respond to anticipated violence and harassment) and building parallel institutions like Black-run car pools. (The Nashville segment of the documentary film “A Force More Powerful” highlights some of this preparation.) During the campaigns, intense negotiations were happening between civil rights leaders, politicians and business owners until shifting power dynamics made negotiated agreements possible.

During King’s time there was an acknowledgement of how difficult this work is and how much investment in relationships, skills-building and planning was required to dismantle a Jim Crow authoritarian system built on racism and violence. Important victories like the 1964 Civil Rights Act and the 1965 Voting Rights Act were the result of multi-faceted strategies that involved diverse actors doing many different things. The significance of intra-movement trainings to building the size and effectiveness of the civil rights movement, which were led by Rev. James Lawson, C.T. Vivian, Diane Nash, Bernard Lafayette and others, cannot be overstated.

Today, the challenges are no less significant or complex. While the Jan. 6 insurrection may have failed in the short term, and some election deniers may have been defeated during the midterms, U.S. democracy continues to face deep existential threats. Everyone has a role to play in stopping the slide into political violence and extremism, and in strengthening democratic culture and institutions.

There is a lane for everyone: Those skilled in educating the public about the risks we face (such as the creators of this new graphic novel about Jan. 6); those who are engaging courageous conservatives (like Country First and Millions of Conversations); those conducting important analyses (like the Bridging Divides Initiative and Political Research Associates); those experimenting with different forms of dialogue (like Urban Rural Action and the Village Square); those who are organizing within and between communities and movements (like the Poor People’s Campaign, the Women’s March, the Social & Economic Justice Leaders Project and the 22nd Century Initiative); those who are leading trainings in organizing, nonviolence and conflict resolution (like Training for Change, 350.org, Beautiful Trouble, the International Center on Nonviolent Conflict, Pace e Bene, East Point Peace Academy and Nonviolent Peaceforce); and groups that are leading local and national experiments in racial justice and healing as part of the national Truth, Racial Healing, and Transformation Movement.

Strengthening our collective muscle to both resist the interconnected injustices that King described and to build a democracy grounded in love and justice requires being able to “see” one another, with our different skills, relationships and levers, as core elements of a shared pro-democracy ecosystem — in the U.S. and globally. That takes recognizing that resurgent authoritarianism, misogyny and white nationalism have deep transnational roots and can only be transformed through global solidarity. May we continue to embrace King’s powerful advice that we pursue multiple, connected lanes in order to achieve racial justice and multiracial democracy.

Maria J. Stephan is the chief organizer and co-lead of the Horizons Project, which is focused on strengthening relationships and collaboration between the social justice, peacebuilding and democracy communities in the U.S. and globally. She is the co-author of "Why Civil Resistance Works: The Strategic Logic of Nonviolent Conflict," "Bolstering Democracy: Lessons Learned and the Path Forward," and "Is Authoritarianism Staging a Comeback?" Follow her on Twitter @MariaJStephan.

Waging Nonviolence is a nonprofit media organization dedicated to providing original reporting and expert analysis of social movements around the world. With a commitment to accuracy, transparency and editorial independence, we examine today’s most crucial issues by shining a light on those who are organizing for just and peaceful solutions.  Donate