By Josh Eidelson The Nation
Alleging unpaid wages and repeated retaliation, McDonald’s workers in central Pennsylvania launched a surprise strike at 11 this morning. The strikers are student guest workers from Latin America and Asia, brought to the United States under the controversial J-1 cultural exchange visa program. Their employer is one of the thousands of McDonald’s franchisees with whom the company contracts to run its ubiquitous stores.
January 28, 2013

In Walmart and Fast Food, Unions Scaling Up a Strike-First Strategy 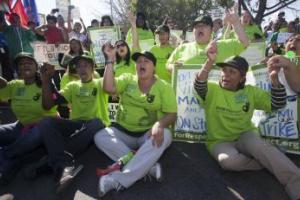