How Unite Took on the Fast Food Companies Over Zero Hour Contracts and Won! 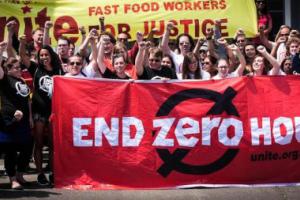 After a decade long campaign led by Unite union, fast food chains have committed to ending zero hour contracts in New Zealand. Tens of thousands of workers in the fast food industry will now have secure hours of employment. This victory in New Zealand -- supported by workers in Indonesia, Korea, Philippines, Hong Kong and elsewhere represents a fundamental shift in the employment relationship of the most vulnerable workers in the country
Subscribe to New Zealand