Progressives need to pressure Obama to stick up for workers as promised..."As Obama begins his second term, Republican obstructionism cannot be an excuse for inaction - particularly when it comes to the president's use of his bully pulpit." 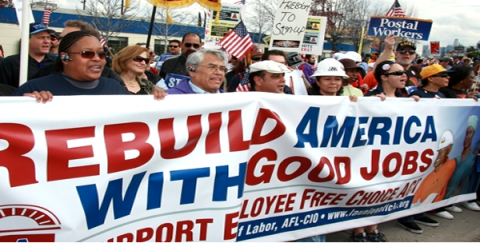 President Barack Obama's re-election is a huge relief - we dodged the Romney/Ryan bullet.

However, that's not the same as winning a better future. If Obama's first term is a prologue to the second, we should not expect to see much progress in strengthening the rights or bargaining ability of workers. Therefore, in Obama's second term, we need to be:
Progressives need to recognize where the real fight is happening. Congress is still firmly under Republican control - or, at least, under threat of a Republican veto that can stop any worthwhile federal legislation. Since progress won't happen in Washington, we must work for it at the state and local level. We are already seeing some of the most exciting innovations take shape in cities and metropolitan regions. Urban labor-community coalitions are making respect for collective bargaining a precondition for businesses to receive public support. They are also approaching politics in a new way. In exchange for supporting candidates, these coalitions are ensuring that politicians use the bully pulpit to defend workers and denounce union-busting. In San Jose, Calif., student, labor and faith groups demanded that local politicians back an across-the-board minimum wage increase that passed on Election Day. And in Long Beach, Calif., a coalition of LGBT activists, labor and faith groups got city council members to endorse a ballot measure for hotel housekeepers to get a raise, which passed.

Such coalitions must evaluate elected officials on whether or not they understand that their success in pushing legislation forward is directly linked to the strength of social movements. As Rep. Keith Ellison (D-Minn.) told me earlier this year in an interview for The American Prospect, "Sympathetic members of Congress have the power to draft, introduce and vote on legislation. But leaders in the progressive community ... have the ability to mobilize, educate and organize all across America. We need each other to be successful." We can no longer afford to invest in politicians who do not understand this.

Most candidates favored by Democratic Party powerbrokers are unable to grasp this concept. The few who do have social- movement roots, such as Sen. Sherrod Brown (D-Ohio) and Rep. Barbara Lee (D-Calif.). Consequently, a long-term electoral strategy must involve cultivating candidates directly from the ranks of social movements and then fighting for them in the primaries.
As Obama begins his second term, Republican obstructionism cannot be an excuse for inaction - particularly when it comes to the president's use of his bully pulpit.
During the recent attacks on collective bargaining rights in Wisconsin and Ohio, and during the teachers' strike in Chicago, White House leadership was nowhere to be found. Obama once promised, "If American workers are being denied their right to organize and collectively bargain when I'm in the White House, I'll put on a comfortable pair of shoes myself. I'll walk on that picket line with you as President of the United States of America."
The President seems to have misplaced his walking shoes. We should send him a new pair - and make sure that no future candidates we endorse have any excuse for losing theirs.
[Amy Dean is a fellow of The Century Foundation and principal of ABD Ventures, LLC, an organizational development consulting firm that works to develop new and innovative organizing strategies for social change organizations. Dean is co-author, with David Reynolds, of A New New Deal: How Regional Activism Will Reshape the American Labor Movement. Dean has worked for nearly two decades at the cross section of labor and community based organizations linking policy and research with action and advocacy. You can follow Amy on twitter @amybdean, or she can be reached via www.amybdean.com ]