Brazil to give $25 monthly culture stipend to workers to go to movies, read books or visit museums 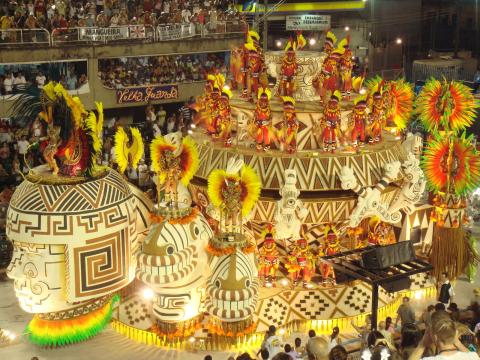 The Carnival in Rio is definitely the biggest and most famous, not just in Brazil but in the whole world. And it is most visited as well. Rio de Janeiro's carnival alone drew 4.9 million people in 2011, with 400,000 being foreigners. , See-the-World.org

BRASILIA (AFP).- Despite the economic crisis, Brazil announced Thursday it planned to give workers here a 50-real ($25) monthly stipend for cultural expenses like movies, books or museums.

"In all developed countries, culture plays a key role in the economy," Culture Minister Marta Suplicy said in an interview on national television.

"Now we are creating food for the soul; Why would the poor not be able to access culture?" the minister said.

Suplicy said the new incentive, approved by Congress and endorsed by Rousseff late last month, is expected to be introduced some time this year.

"The money will be put in the hands of the worker who will decide how to spend it, by going to the movies, to the theater, to an exhibition or the museum," she explained.

Other possible uses include purchases of books, music or DVDs. The "Culture Stipend" will be paid through an electronic card, with employers deciding whether to extend the benefit to workers earning up to five times the minimum wages (up to $1,700 a month.)

Employers will cover 90 percent of the cost of the stipend but can then deduct the amount from their income tax. Workers will pay the remaining 10 percent, but can opt out if they choose to do so.

"There are many Brazilians, 17 million, who today earn up to five minimum wages, which could potentially means an injection of $3.5 billion in the cultural sector," Suplicy said in an editorial published in the Folha de Sao Paulo this week.