The Center for Media and Democracy says the Pennsylvania effort is part of a nationwide campaign against unions by right-wing business groups, such as the Koch-backed Americans for Prosperity and the Tea Party organization FreedomWorks. 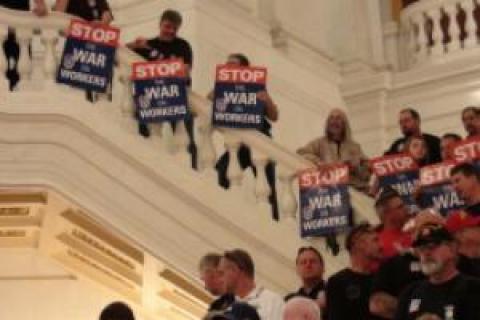 Pennsylvania labor is primed for the fight: An April 11, 2011 Teamsters rally against previous right-to-work legislation drew some 400 protestors to the state Capitol. , The Rick Smith Show / Flickr / Creative Commons
Backed by powerful national business interests, conservative legislators in Pennsylvania announced last week a new push to bring so-called “right-to-work” laws to the Keystone state. State Rep. Daryl Metcalfe said January 22 that he and five other Republican legislators would introduce a package of bills aimed at crippling the ability of labor unions to collect dues from members.
Pennsylvania labor leaders say the package is part of a broad assault on labor that began in 2010 when the GOP won control of the governor’s office and both houses of the legislature.
It’s no coincidence that the proposal comes hard on the heels of similar legislation in Michigan, says researcher Brendan Fischer of the Washington, D.C.-based Center for Media and Democracy. According to a new report by Fischer, the Pennsylvania effort is part of a nationwide campaign against unions by rightwing business groups such as the David Koch-backed Americans for Prosperity and the Tea Party organization FreedomWorks. Fischer found that January fundraising appeal by FreedomWorks asking donors to finance a 2013 campaign to de-fund unions specifically named Pennsylvania.
“This looks a lot like a march from state to state to attack unions that support progressive causes and progressive politicians,” says Fischer, citing similar anti-union efforts over the last two years in Wisconsin, Ohio, Indiana, and Michigan. All of these attacks can be linked back to the American Legislative Exchange Council, or ALEC, he says, a business-funded group supporting anti-worker initiatives nationwide. Legislative language in the Michigan and Pennsylvania anti-union bills are strikingly similar to ALEC’s own model right-to-work bill, he notes, and Metcalfe has well-documented ties to the group.
Pennsylvania labor leaders are not panicking, however, at signs they are being targeted by well-funded national organizations. “We’ve canvassed all the [state legislators] on both sides of the aisle and we feel pretty good,” says Pennsylvania AFL-CIO President Rick Bloomingdale. He believes that Metcalfe’s package is firmly opposed by both Democrats and union-friendly Republicans.
“Given what happened in Michigan, we have to be on guard. But in the past we have been able to block proposals like this. I think right-to-work [legislation] has been introduced every year for the past 30 years, and we’ve always been able to block it,” Bloomingdale tells Working In These Times.
“It’s got no legs” to move forward in the state house, agrees Wendell Young IV, president of Local 1776 of the United Food & Commercial Workers (UFCW) union. Pennsylvania unions have worked amicably with a bloc of Republican legislators for years, he explains, and these relationships don’t show any signs of being overturned now.
“The ALEC folks are definitely active here….so there is always a concern,” Young continues. Republican House Majority Leader Mike Turzai “is the main waterboy for ALEC in Pennsylvania,” the union chief says, but has not proven to be especially effective at advancing ALEC’s agenda in his two years as party leader. “Turzai made himself famous around the country when he was caught on video bragging about how Pennsylvania’s voter ID law meant that Mitt Romney would win the state [in 2012],” Young says. “Well, we all know now that he was wrong about a couple of things. The voter ID was blocked, and Obama won the state with a strong majority.”
Between fighting Corbett’s many threats to privatize public services over the last two years and mobilizing voters for the 2012 presidential election, unions in Pennsylvania are well-organized to take on a right-to-work fight, Bloomingdale adds. Most recently, UFCW has been battling with Turzai and Gov. Tom Corbett over their plans to privatize the state liquor distribution system, which would eliminate the jobs of some 5,000 state workers, including members of UFCW.
“Corbett has said if the legislature passes right to work, then he will sign it. We take him at his word. So we have to kill it in the [Pennsylvania] house or senate,” Bloomingdale says. “We would win if the vote were held tomorrow, but we have to stay on top of this. [Americans for Prosperity is] ‘black money’ and you never want to underestimate what that kind of money can do.”
“None of this happens in a vacuum,” concludes UFCW’s Young. “Corbett’s poll numbers are not very good right now. I don’t think he is looking to kick a million union voters in the teeth” by pushing additional anti-union efforts now.
Bruce Vail is a Baltimore-based freelance writer with decades of experience covering labor and business stories for newspapers, magazines and new media. He was a reporter for Bloomberg BNA’s Daily Labor Report, covering collective bargaining issues in a wide range of industries, and a maritime industry reporter and editor for the Journal of Commerce, serving both in the newspaper’s New York City headquarters and in the Washington, D.C. bureau.