Exactly Why Is President Obama Going to Israel?

As soon was announced that the President would be visiting the Middle East, supporters of the policies of the Netanyahu government went into overdrive in an effort to throw cold water on any idea that the diplomatic mission could achieve any breakthrough in the Israeli-Palestinian “peace process.” 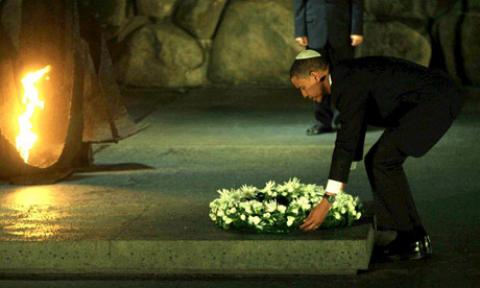 Both Israel and the United States seek to quash expectations that the visit will jump-start the Israeli-Palestinian peace process.

While Israeli Prime Minister Benjamin Netanyahu says he and U.S. President Barak Obama have agreed that when the U.S. President visits Israel they would discuss “three main issues ... Iran's attempt to arm itself with nuclear weapons, the unstable situation in Syria ... and the efforts to advance the diplomatic process of peace between the Palestinians and us," that’s not exactly what others are saying in either Washington or Tel Aviv.

As soon was announced that the President would be visiting the Middle East, supporters of the policies of the Netanyahu government went into overdrive in an effort to throw cold water on any idea that the diplomatic mission could achieve any breakthrough in the Israeli-Palestinian “peace process.”

“While the US ambassador to Israel said today that Mr. Obama would visit the country with an ‘urgent’ mission to revive peace negotiations, Israeli diplomats said talks with Benjamin Netanyahu would focus on Iran,” reported the British daily Telegraph. “The peace process may be the subject that is initially emphasized in public but there are other issues on the table that must be addressed before the summer,” one diplomat told the paper, alluding to Israel's spring deadline for Iran to stop enriching uranium. “The deal they will have done may be on the subject of war, not of peace.”

“There are currently bigger and much more urgent issues to address than the Palestinian-Israeli conflict,” one Israeli official told the Telegraph.

To say the U.S. moved quickly to squash any expectation that the President’s visit to the Middle East might move toward resolving the Palestinian-Israeli conflict would be an understatement. At a press briefing February 6, White House Press Secretary Jay Carney said that “this is a trip the President looks forward to making that is timed in part because we have here obviously a second term for the President, a new administration, and a new government in Israel, and that's an opportune time for a visit like this that is not focused on specific Middle East peace process proposals. I'm sure that any time the President and Prime Minister have a discussion, certainly any time the President has a discussion with leaders of the Palestinian Authority, that those issues are raised. But that is not the purpose of this visit.”

All of this would seem to raise the question: why is he going?

In response to the demands of the Republicans and rightwing supporters of the Netanyahu government that he make such a pilgrimage? Not likely.

To bolster the standing of Netanyahu following the shellacking he and his Likud party suffered in the recent Israeli parliamentary elections? That has been suggested by Israeli critics of government policy.

To engage the embattled regime of Jordan’s King Abdullah II, with whom Obama will also meet after the visit to Israel, as some have suggested? That last suggestion is not farfetched. One element largely overlooked so far in the discussion about Obama’s visit next month is that he will also visit Amman.

“With the region already in flames – Egypt no longer a reliable US partner, and Syria in utter chaos – stability in the Hashemite Kingdom and the survivability of King Abdullah II is a crucial interest not only to Israel, but to the US,” wrote Keinon in the Jerusalem Post,” adding that Obama’s visit to Amman “and the signal that sends of US support for Abdullah – is not insignificant.” Evidence that Washington is concerned about the stability of the Jordanian regime has been around for some time.

Last October, the U.S. rushed troops to the Jordan-Syria border to bolster that country's military capabilities. One hundred military planners and others are already on the scene, operating from a joint U.S.-Jordanian military center, and the U.S. forces are said to be building another base for themselves. U.S. Secretary of Defense Leon Panetta said the move was prompted by developments in adjacent Syria.

On January 28, Abdullah II met with Khaled Mashaal, leader of the Palestinian political movement Hamas for the third time in one year. Abdullah is said to have told Mashaal that direct negotiations with Israel and the creation of a timetable for the two-state solution are “the only way to achieve security and stability in the Middle East.” Mashaal was reported to have said later that he and the king had discussed the inner-Palestinian reconciliation and examined the Palestinian issue and its future in light of the then upcoming U.S. and Israeli elections.

Mashaal, a Jordanian citizen, was exiled from the country in 1999, accused of being a risk to Jordan’s security.

During the meeting the king expressed his support of the inter-Palestinian reconciliation attempt, saying it forms the basis to bolster the Palestinian people's unity and that only through unity could they achieve their legitimate rights, including a Palestinian state's establishment.

On the other hand, there has been some speculation that there is, indeed, agreement between Washington and Tel Aviv on an approach to the Palestinian question. It’s called “get Israel and the Palestinians back to the negotiating table.” That’s the way U.S. Ambassador to Israel Daniel Shapiro put it last week.

Herb Keinon, diplomatic correspondent for the Jerusalem Post, wrote February 8 that the U.S. “is looking for something from Jerusalem to dangle in front of the Palestinians and thereby bring the Palestinian Authority back to the negotiating table.”

It’s hard to get more provocative than that.

In defiance of international law that bars an occupying power transferring citizens from its own territory to occupied territory – and overwhelming world public opinion  – the Netanyahu regime has decided to build additional 90 units – the first of a planned 300 unites – in the Bet El illegal settlement, just east of the central West Bank city of Ramallah, the majority Christian capital of the Palestinian Authority.

“The advancement of this program could overshadow Obama’s visit,” said Yariv Oppenheimer, a spokesman for Peace Now, an Israeli group that opposes settlement construction to the media. “This is a misguided and ill-timed decision.”

Misguided it was but there is little reason to think the timing was unintentional.

One idea being floated in the Israeli media (but so far disavowed by the government) is that Netanyahu has offered to suspend settlement activity in the West Bank, except in Jerusalem and around existing colonial blocks.

“While there are no guarantees, it is hard to believe that if Netanyahu made such an offer, and Obama and his new Secretary of State John Kerry pushed hard on Ramallah, PA President Mahmoud Abbas would reject it,” Keinon wrote February 8. “And one of the arguments likely to be used in prodding the Palestinians is that a failure to accept the offer, a continued refusal to reenter talks, could have negative repercussions on an already precarious Jordan.”

“The Palestinian position is clear,” Nabil Abu Rdainah, a spokesman for Palestinian President Mahmoud Abbas, said in response to the new Beit El construction. “There can be no negotiation while settlement continues."

The Secretary-General of Palestinian People's Party Bassam al-Salhi told the news agency Ma'an that Obama’s visit may create the "illusion" of returning to negotiations, but would have no impact on the peace process. Jamal Muhaisen, a member of the Central Committee of the Palestinian political party Fatah, said negotiations can resume only when Israel fulfills its previous commitments under international law and stops settlement construction on occupied land.

Hanan Ashrawi, a senior official with the Palestine Liberation Organization and member of the Palestinian National Council, said she and other Palestinians would welcome Obama’s visit “if it signals an American promise to become an honest and impartial peace broker…which requires decisive curbs on Israeli violations and unilateral measures, particularly settlement activity and the annexation of Jerusalem, as well as its siege and fragmentation policies.”

“Negotiating in good faith means you don’t place preconditions,” Netanyahu recently told a group of settlers. “In the last four years, the Palestinians have regrettably placed preconditions time after time, precondition after precondition. My hope is that they leave these preconditions aside and get to the negotiating table so we don’t waste another four years.” Well, not exactly. The chief impediment to achieving a solution to the conflict has been and remains the Israeli governments continued colonial expansion. While Netanyahu’s rightwing Likud party didn’t do as well as it had expected to in the last election, gains were made by coalition partners even further to the right who oppose a Palestinian state and advocate outright annexation of major parts of the West Bank.

“Should we be happy or not?” Israeli writer Uri Avnery asked last week, concerning the upcoming visit of the U.S President. Writing from Tel Aviv in Counterpunch, he answered: “Depends. If it is a consolation prize for Netanyahu after his election setback, it is a bad sign. The first visit of a US President since George Bush Jr. is bound to strengthen Netanyahu and reinforce his image as the only Israeli leader with international stature.

But if Obama is coming with the intention of exerting serious pressure on Netanyahu to start a meaningful peace initiative, welcome.

Netanyahu will try to satisfy Obama with "opening peace talks." Which means nothing plus nothing.

Yes. Let’s talk. "Without preconditions." Which means: without stopping settlement expansion. Talk and go on talking, until everyone is blue in the face and both Obama’s and Netanyahu’s terms are over.

“But if Obama is serious this time, it could be different,” wrote Avnery, a founder of the Gush Shalom peace movement, who has been advocating a two-state solution for decades. “An American or international blueprint for the realization of the two-state solution, with a strict timetable. Perhaps an international conference, for starters. A UN resolution without an American veto.”

Carl Bloice, a member of the National Coordinating Committee of the Committees of Correspondence for Democracy and Socialism, is a columnist for the Black Commentator, where he serves on its editorial board. His writing can also be found at Left Margin.