Chicago Teachers Union President Karen Lewis successfully tapped into the wrath of frustrated members and took on Mayor Rahm Emanuel last September when she led the city's first teachers strike in 25 years. On Tuesday, a group of union members said Lewis didn't leverage the strike to get enough from the district — including a guarantee not to close schools — and announced a slate of candidates that will try to unseat Lewis and her team in a regular election set for May 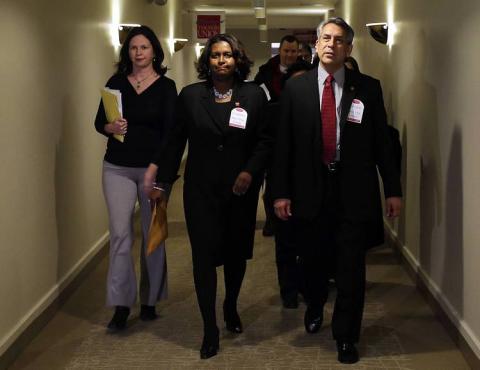 New candidates for the Chicago Teachers Union are Kelly McFarlane, from left, for financial secretary; Tanya Saunders-Wolffe, for president; and Mark Ochoa, for vice president. On Tuesday, they announced their opposition to current CTU President, PHIL VELASQUEZ, CHICAGO TRIBUNE

On Tuesday, a group of union members said Lewis didn't leverage the strike to get enough from the district — including a guarantee not to close schools — and announced a slate of candidates that will try to unseat Lewis and her team in a regular election set for May 17.

"We struck, we fought, we gave Karen Lewis all the power she needed, but she didn't deliver at the bargaining table," said Tanya Saunders-Wolffe, 47, a school counselor who will head the ticket.

Other contenders for CTU leadership are likely to emerge in the weeks to come. But Tuesday's announcement gives an indication of how Lewis' opponents will confront a leader who galvanized membership such a short time ago.

"We're still facing closings, firings and givebacks — there were things in the (old) contract that we lost," Saunders-Wolffe said.

She works at Owens Elementary, one of the 129 schools still under consideration by the district for closing this year. Her running mate, Mark Ochoa, was an officer under the CTU president whom Lewis beat in 2010. Ochoa also works for a school on the district's preliminary closings list.

Saunders-Wolffe said the union should have pressed for a moratorium on school closings when it had thousands of members on the street during the strike.

Lewis could not be reached for comment Tuesday. In January, Lewis along with CTU Vice President Jesse Sharkey and two other union leaders were nominated by their organization, the Caucus of Rank-and-File Educators, or CORE, to run for a second, three-year term.

Sharkey said Tuesday the union is doing everything it can to fight school closings.

"We have a lot of work right now as a union to stop 129 schools from closing and defending our contract," Sharkey said. "The leadership is trying to carry out that work front and center right now."

The coalition that announced its plans Tuesday is made up of members of former CTU President Marilyn Stewart's United Progressive Caucus; the Pro Active Chicago Teachers Caucus, whose leaders ran CTU until 2004; and independent union members.

Members of the ticket said many teachers weren't entirely in favor of the contract negotiated by the Lewis team during the seven-day strike in September, but only voted for it to get back to the classroom.

As teachers are now beginning "to live the contract, they're not very happy with the results they're finding," Saunders-Wolffe said. The group said the union gave away too much on issues involving teacher seniority and teacher evaluations.

While other slates can be expected, observers say the coalition that announced its candidacy Tuesday presents the biggest challenge to Lewis and her team.

CORE came to power three years ago by fighting what it branded as a complacent old guard of union leadership. The caucus started out as a book club reviewing Naomi Klein's bestseller "The Shock Doctrine," which argues that corporate interests have exploited crises to push through their agendas.

CORE's 2010 platform opposed the privatization of public schools and the aggressive education reform efforts pushed by former CPS chief Arne Duncan, who is now the U.S. secretary of education.

Lewis' victory was not an easy one. The incumbent, Stewart, garnered the most votes in the first go-round, then narrowly lost to Lewis in a runoff.

Lewis was successful in marshaling her forces for a strike that featured rallies of thousands of red-shirted teachers who clogged downtown streets. Landing a contract that made all those members happy proved more difficult.

Despite Lewis' attempts to portray a united front, rifts began emerging in the rank and file during the strike. When a contract approved by Lewis' team first came up for a vote, delegates turned it down, saying they didn't feel leadership had provided them with enough details. Factions within the union distributed leaflets calling Lewis a "sellout." The strike dragged on for another two days.

The coalition that will challenge Lewis in May criticized her for acquiescing on Illinois Senate Bill 7, which passed in 2011 and among other things made it harder for teachers to strike. The bill also allowed Emanuel to lengthen the school day without union backing.

With a final list due from CPS by the end of March, the issue of school closing figures to dominate the election. Sharkey noted that the teachers contract for the first time had language ensuring that teachers will be following students to a new school should their school be closed. The contract also promises that half of the new hirings go to veteran teachers, he said.

Xian Barrett, a leader within CORE, said union members should not forget how much the teachers strike led by Lewis and her officers meant to a beleaguered national labor movement.

"Union members understand what a strike represents," Barrett said. "Everyone was looking at Chicago and wishing they had that. We saw the corporate privatization of education coming and hurting our children, and we took a stand."